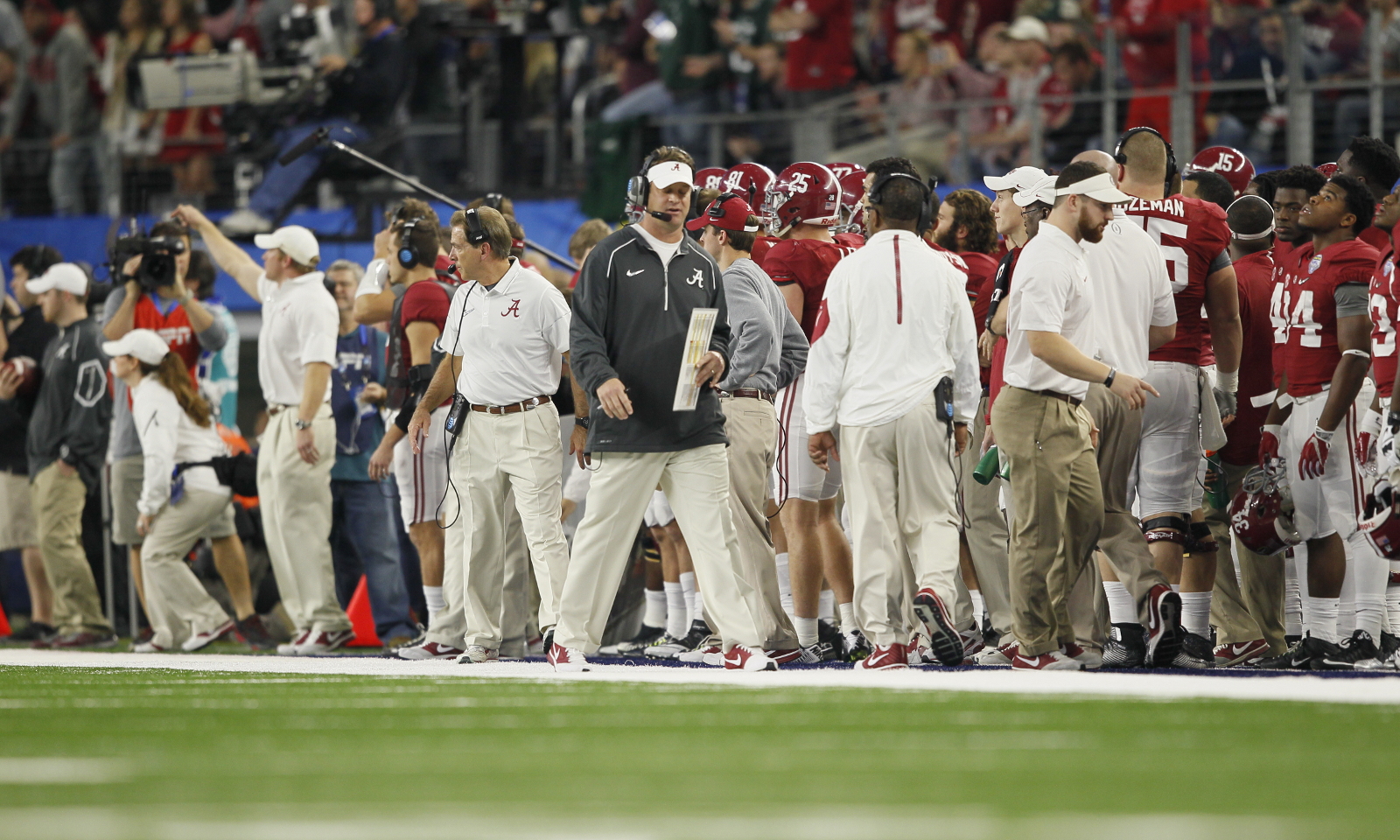 Creating favorable match-ups is the motto of Alabama offensive coordinator Lane Kiffin. His joy comes when he is able attack defenses at times with certain looks.

Crimson Tide running back Derrick Henry had no issues in the regular season, as he posted 1,986 rushing yards and 23 touchdowns on his way to being the school’s second Heisman Trophy winner. Michigan State was ready to stop Henry, but it did not anticipate Kiffin flipping his play sheet.

Spartan defenders Riley Bullough and Shilique Calhoun were so focused on Alabama’s run game that Kiffin reverted 80 percent of the offense to the back of his sheet. Quarterback Jacob Coker torched Michigan State for 286 passing yards and two touchdowns on a 83.3 percent completion mark (25/30).

With Henry merely a decoy, Alabama handled the Spartans 38-0 in the Cotton Bowl. University of Phoenix Stadium will be a different venue and Clemson will be a different opponent. Clemson’s secondary, unlike Michigan State’s, has been healthy all year.

The Tigers’ have two NFL-caliber cornerbacks in Cordrea Tankersley and Mackensie Alexander. Tankersley leads the team in interceptions (five) and pass breakups (nine).

Kiffin was complimentary toward this group in Wednesday’s press conference.

“Their cornerback No. 2 [Alexander] causes a lot of issues.” Kiffin said. “They have a lot of big time players, so we will our hands full in this match-up. They are extremely well-coached and multiple on defense in what they do.”

Much praise goes to Clemson’s pass defense, yet its front seven could be neutralized against the run if Shaq Lawson is not 100 percent. The 6-foot-3, 270-pound defensive end played only one snap against Oklahoma in the Orange Bowl, due to a knee injury.

His knee was heavily wrapped afterwards, and during Wednesday’s practice Lawson was seen moving very gingerly on it. He leads the group in negative plays with 10.5 sacks and 23.5 tackles for loss. Establish Henry bodes well for the Crimson Tide against Clemson. Sophomore left tackle Cam Robinson is healthy, and its offensive line has been more consistent since the LSU game. Kiffin will still take shot with Coker to Calvin Ridley, ArDarius Stewart and others, but his risks must be calculated.

Clemson has accounted for 16 interceptions and four touchdowns.

Regardless of having talented corners, Tigers’ defensive coordinator Brent Venables does plan on having two safeties high. A strong run game for Alabama will bring a safety into the box to create man-to-man opportunities for Ridley, Stewart, Richard Mullaney and O.J. Howard. Michigan State feared Henry’s demoralizing runs, while Clemson does not want to give up chunk yards through the air. This could be a game where the wear and tear of Henry breaks down Clemson’s front line, forcing its secondary to make decisions.

He was a decoy last week, but Kiffin will need to have Henry set the tone next week.