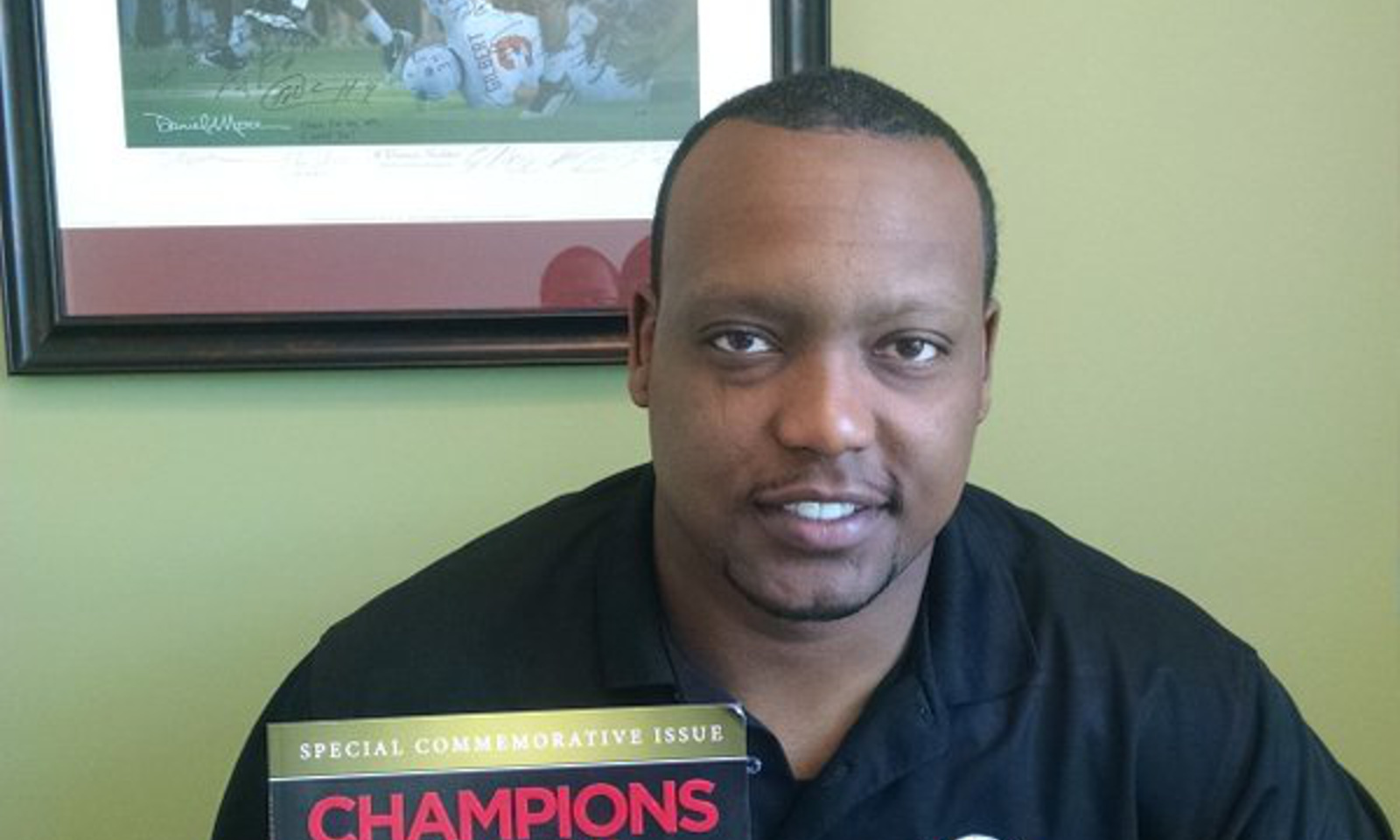 TUSCALOOSA, Ala.| Alabama coach Nick Saban is concerned about the full student-athlete.

His make-up of principles, known as “The Process,” focuses on players doing well not only on the field, but also in the classroom and community. Not every athlete is called to play professional ball, nevertheless, success can be obtained if a plan is put into action.

In 2008, a moniker was started as the Crimson Tide began to build back toward the dominance it had in the past under legendary coaches Paul W. “Bear” Bryant and Eugene “Gene” Stallings.

Fans coined the term “BuiltByBama” and credited it to the program’s 2008 recruiting class; a unit that featured Mark Ingram, Julio Jones, Marcell Dareus and Terrence “Mount” Cody. Despite their success, it was the Tide’s 2005 class that prepared it for a run at a national championship.

Alabama football was in a state of frustration, prior to Saban’s arrival in 2007.

Coach Mike Shula was the one who stepped in to take the job, during a time when the school was under probation. He struggled in his first season (4-9, in 2003), but in year three Shula had a squad that would push for a national title. One of the guys on that group was cornerback, Chris Rogers.

The Lakeland, Florida standout started playing football at eight years old and instead of choosing a glamorous role, he yearned for contact at an early age.

“Football was an outlet for me,” Rogers said.

“I was a very hyper kid and it was the only thing that could mellow me out. I got pretty good at it and the first positions I played were offensive guard and defensive tackle. My uncle told me if you want to be good, then you need to know how to hit people.”

Rogers took his uncle’s advice, but it came with an uphill battle. He was diagnosed with asthma, which is a condition that causes a person’s airways to become inflamed, narrow and swell. The swelling produces extra mucus, causing breathing to be difficult and an inhaler needed to treat it.

“My uncle told me that I couldn’t be out playing football with asthma,” Rogers said.

“He basically took my inhaler when I was 10 years old. Every time I would do something, I would grab my inhaler and he would ask me what I was doing. So, he took it and threw it and though some people would think that’s crazy, he was showing me that I didn’t need to be dependent on anything to make me great. All I needed was to have a strong work ethic.”

Running ten laps was one of multiple things that Rogers did to prove how he was just as good as others. He took the same mentality to middle school and despite personal struggles, Rogers started to blossom in high school. His height was the first thing to take a turn upward.

“I didn’t really starting growing into being 6’1″ until the end of my sophomore year going into my junior year. I was just smaller than everybody, but I knew my growth spurt was coming soon. When I hit it, I grew into becoming the top cornerback. Everything started to carry over from my legs to my stride. I went from the kid who was in the middle of the pack to leading it.”

Rogers redshirted his freshman season (2005) at Alabama; a year in which the Tide ended with a 10-2 record (wins later vacated). It started the year at 9-0, until blemishes against LSU and Auburn came in.

Rogers’ first defensive touchdown at Alabama in 2008 vs. Tulane: Photo via rolltide.com

“One thing that I know from Coach Shula was that he loved the University of Alabama, Rogers said.

“I think Coach Shula was more big for the school than what it understands right now. Without Shula, there is no Coach Saban. For Shula to come in and operate during a time when we were on probation, didn’t have games and loss scholarships, he was able to work with less and did well.”

In four seasons, Rogers would total 43 tackles, four forced fumbles, two fumble recoveries, an interception (Arkansas, in 2008) and a defensive touchdown in 50 games. He earned special teams player of the week honors 14 times from the coaching staff during his tenure.

Thirteen players that remained from Alabama’s 2005 class tasted victory for the first time, when the team won a national title in 2009. For Rogers, the ambition was planned years before it happened.

“The 2005 class made a lot of predictions,” he said. “We were kind of moxie and Brandon Deaderick came in as a true freshman and said ‘before we leave here, we are going to win three national championships’. We didn’t come here to be mediocre. We came here to dominate.”

Deaderick’s prophecy would have been a reality, if not for two things: Tyrone Prothro suffering a compound leg injury against Florida in 2005 and Gators’ quarterback Tim Tebow sticking a dagger in Alabama in the 2008 Southeastern Conference Championship Game, 31-20.

Eryk Anders was another member from the 2005 class that ran with Saban’s approach. His strip sack of Texas’ quarterback Garrett Gilbert in the 2010 national title game sealed it for Alabama.

Rogers was one of the first players to congratulate his teammate once Anders reached the sidelines. Hard work and attention to details are two of the pillars in Saban’s process. Both helped Rogers become a champion at Alabama, but it’s also helped him in his own business.

Together Assisting People or TAP is a non-profit organization that Rogers founded in 2010.

Had a great time on talking on the @joelockettshow promoting our interest meeting for our TAPLeadership Program tomorrow, Sunday, May 15 from 4:30-6PM, on the Campus of UAB in Birmingham AL. Male athletes, grades 8th-11th, are encouraged to attend this informative meeting. Everyone wants to be an athlete, but they don't know what it truly takes to be successful. TAP wants to teach the student athletes to be better students and people, as well as how to succeed outside of their sport. Parents are encouraged to attend the interest meeting with their children. UAB Student Center 3rd Floor Alumni Theater 1400 University Blvd Birmingham AL 35294 #JoeLockettShow #LoveHateDebate #ServeYourCity #DiversifyYourTalents #TAPLeadership #TAPInc #TogetherAssistantPeople

Its mission is to prepare student athletes to succeed in life outside of athletics, while its vision is to put into effect activities and events that provide mentoring, educational, recreational and physical fitness programs related for youth. The goal is to teach young people of today how to be leaders of tomorrow. Rogers said that at TAP, people expect greatness.

“The biggest thing no one understands, especially with this next generation is that you are always learning,” he said. “No one has all the answers to a problem. There is always room to improve and get better. As long as you know that, you can become an effective leader.”

Rogers is the founder and CEO of Together Assisting People (TAP): Photo courtesy of Chris Rogers

TAP has become one of the biggest non-profit organizations in Alabama, but a worldwide status is within its grasp. Rogers said the company’s care for athletes is why it is able to do so much.

“We care about them understanding who they are and what they are,” he said.

“They are more than just a basketball or a football. We want them to go to college and we know that every kid isn’t going to college, but if we can prepare them for the job force, to be a great husband, a great father and to take ownership in the community, then we are doing our part. ”

Tony Brown, Reuben Foster, Da’Shawn Hand and Bo Scarbrough are a few current names in Alabama football that have taken part in the organization. TAP has even made a profound impact on four-star defensive end Quinnen Williams—who signed in the Tide’s 2016 recruiting class.

This picture from the 2011 NFL Draft brings back so many memories. Choosing to attend The University of Alabama over other schools was one of the best decisions I have made in my life. I'm so thankful to not have only met these guys, but all of the other players as well. It's amazing how time flies, but the one thing that has been consistent is the love that we have for each other and the way we rock with each other on and off the field. That's the Alabama way. We started off as boys and have seen each other develop into men. I love all these guys like brothers and I look forward to A-Day this weekend. Bama Psi Phi for life. #TBT #BiggerThanFootball #Family #WeReady #BamaPsiPhi #RollTide #BuiltByBama #Dynasty #TogetherAssistantPeople #TAPInc

Ex-Alabama players Mark Barron, Mark Ingram, Julio Jones and Marcell Dareus are all involved with TAP. The four have made it a priority to come and help Rogers during each offseason.

Other NFL players, including Vonn Miller (Super Bowl 50 MVP), Randall Cobb and C.J. Mosley stand in agreement of supporting TAP. The organization was named the 2015 Non-Profit/Faith Based Leader during the Best in Minority Business Awards ceremony in Birmingham, Ala.

TAP, who is sponsored by BB&T Bank, Academy Sports and Outdoors, Under Armour and ABC 33/40, had ESPN First Take analyst Stephen A. Smith speak at one of its meetings. Rogers said he wants TAP to be the solution for any problem that’s being faced.

I'm excited to have had the opportunity to interview @StephenASmith last night. His message was very powerful and will have a lasting impact. One thing I took away from our interview, you never lose in a given situation. You either win or you learn, so it's always a win/win. #ESPN #FirstTake #OneOnOne #ChangeAgents #WinWinSituations #KnowYourValue #PayItForward #BeTheChangeYouWantToSee #PassingTheKnowledge #NoFingerPointing #ILoveMyJob #TogetherAssistantPeople #TapInc

“We know all of the problems, but what are we going to do to fix them. It is really about educating these kids and being proactive, not reactive. We want our guys to know that character and discipline will carry them a long way.”

The product that Rogers has become stemmed from lessons he’s learned from both Shula and Saban. He is a two-time graduate of the university, earning his master’s degree with a 3.9 GPA.

For more information on TAP, you can go to www.tapinc.us.