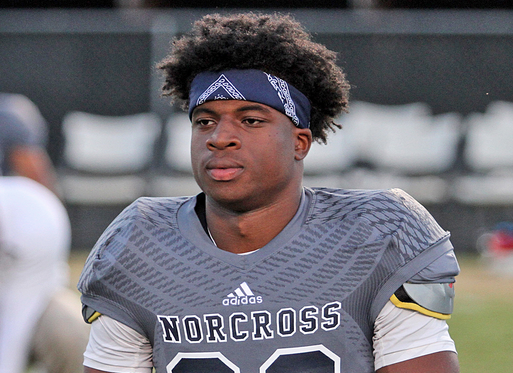 Robert Beal, the 5-star defensive end out of Norcross, GA has been a hot commodity in this 2017 class. Holding nearly 40 offers, nearly every major program in America was after him. But today, Beal made a decision and he decided to stay home, committing to the Georgia Bulldogs.

He made the commitment in a Bleacher Report directed video as a part of their BR Commitment Week series in which they release five commitment videos in five days.

“I’m just a homegrown guy,” Beal told ESPN.com. “I love my home, I love my state and I want to help bring a national championship back to Georgia.”
Beal’s favorite team growing up was Notre Dame and when the opportunity came to be apart of that program in November, he pulled the trigger and committed to the Irish. But after realizing he wanted to take his time and explore his options, Beal decommitted just three months later in February. Although many thought Alabama was the favorite to land the 5-star prospect, Georgia seemed to make the most sense. As Kirby Smart is starting to build something special in Athens after leaving Alabama, that looked to be something that Beal wanted to be a part of.

Beal’s commitment is the thirteenth for the Bulldogs, pushing them into a top 3 position in the class rankings. His pledge is also the eleventh from an in-state player and the eighth that is in the top 20 within the state rankings. The scary thing about that is that they are still in the running for 10 more of the Top 30 players. Some of these players include the state’s top player, cornerback Deangelo Gibbs, No.3 prospect, offensive tackle Andrew Thomas and the fifth ranked player, cornerback Jamyest Williams.

Although it has not been indicated as to whether or not Beal will play outside linebacker or defensive end for the Bulldogs, it won’t really matter. Beal is going to be special at t4he collegiate level at either position due to his athleticism, length and work ethic.