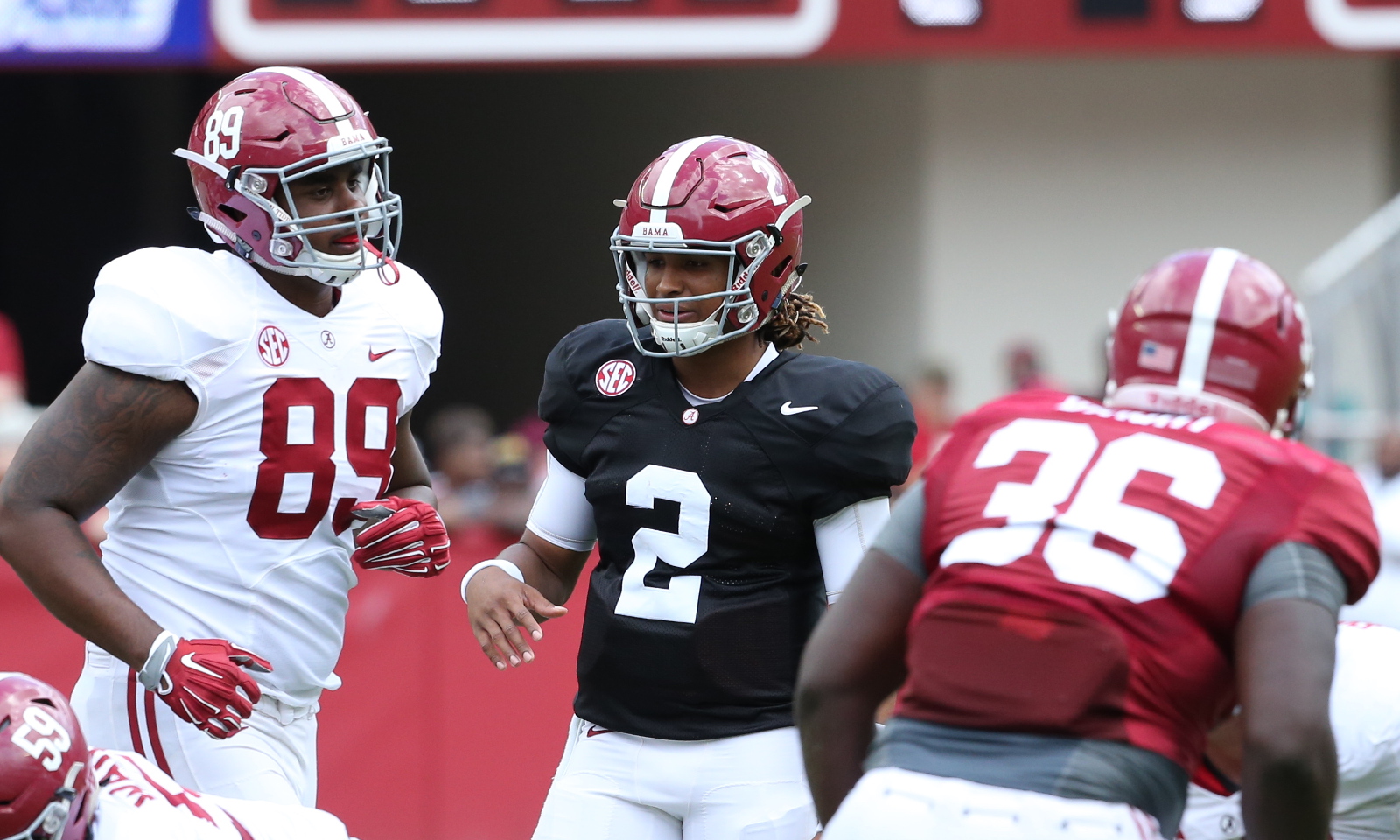 With SEC Media Days over, fans are now 46 days closer to the college football season. As for the Crimson Tide faithful, the buzz returns on August 4—the first day of fall practice.

Coach Nick Saban, his staff and the players will toil in the heat at Thomas-Drew Field for four weeks, as it looks to contend for its 17th national championship in history and fifth under Saban.

It suffered a loss to Ole Miss in week three last year, nevertheless, Alabama rebounded with 10 straight wins to secure a Southeastern Conference championship and 12 wins to obtain a national championship. Talent on both sides of the ball, including Jake Coker, Derrick Henry, Kenyan Drake, Ryan Kelly, Richard Mullaney, A’Shawn Robinson, Jarran Reed and Reggie Ragland was lost to the National Football League. Despite having a tendency to restock on playmakers each year, the Tide still has to answer questions concerning who will emerge at certain positions.

Being that fall practice is three week away, yours truly of Touchdown Alabama Magazine has compiled a five-pack of burning questions the Tide faces going into the camp session.

1. Who wins the starting job at quarterback?

Coach Saban is not going to get away from this question, no matter how many times he uses coach speak or tries nonchalantly glance over it. For the third time in his tenure, Alabama is in search to see who wins the keys to Lane Kiffin’s offense. Four guys are vying for the opportunity and despite Cooper Bateman having the edge in experience, the occupation is still in the air.

So who wins the job? Well, let’s size up our candidates

Cooper Bateman (6-foot-3, 220 pounds) enters fall camp as a redshirt junior. He enrolled in 2013 as a member of a vaunted recruiting class that had Derrick Henry, Reuben Foster, Tim Williams, Jonathan Allen, A’Shawn Robinson, Robert Foster and Eddie Jackson all signed in it.

Bateman was one of the nation’s top quarterback prospects in 2013 from Cottonwood High School (Murray, Utah), but there are some areas of his game that need improvement.

Executing a solid deep ball is a glaring weakness.  He struggled with it at the Manning Passing Academy and through three seasons of practice at Alabama. He’s golden with anything between five to 15 yards, but the accuracy, placement and overall confidence tapers off pass that distance.

Each quarterback under Saban (Wilson to Coker) has develop a deep ball pattern at some point in their careers, while Blake Sims and Jake Coker became masters of the craft in the last two years.

DeAndrew White and Christion Jones were good complements to Amari Cooper (2014); however, the focus was always on Cooper because defenders didn’t think White or Jones could be them.

Calvin Ridley nabs a lot of headlines, but the Tide also has ArDarius Stewart, Robert Foster, Cameron Sims, Gehrig Dieter and O.J. Howard. At some point, defensive backs aren’t going to give a quarterback the short throws. Defensive coordinators will challenge Bateman to step up boldly and complete a deep route downfield. The check mark is to his corner when it comes to experience, size and footwork, but Bateman has to win the team with his arm confidence too.

David Cornwell (6-foot-5, 228 pounds) has served as an interesting mystery as he enters his redshirt sophomore year. He was on Coker’s heels and was initially thought to be the starter during spring of 2015, but he encountered an unusual slide down the depth chart heading into fall practice.

Cornwell, like Bateman, has been under Kiffin for two years and knows what to expect.

He’s the biggest of four quarterbacks and while having a very strong arm, Saban constantly talks about his intelligence within the offense. He enrolled in January of 2014, after missing half of his senior season at Norman (Okla.) North High School because of a knee injury. Regardless of being a four-star recruit and an Elite 11 finalist, Cornwell is listed as a practice squad player on the roster.

If he can mentally put the pieces together, Cornwell would serve as the ideal starter.

He became the highest rated signal-caller signed by the Tide—five-star, and tossed for a career-high 3,404 yards in 11 games as a senior at Santiago High School. Barnett was special in the Elite 11, Nike’s: “The Opening” and Under Armour All-American competitions, proving himself worthy of being a consensus five-star player. He constantly trains with esteemed ESPN quarterback guru George Whitfield every offseason and is starting to look like an SEC quarterback, weight wise.

Barnett was pretty good in the 2016 A-Day game, completing nine of 16 passes for 112 yards in team White’s 7-3 win over team Crimson. If he can keep the turnovers down during scrimmage games, Barnett has an opportunity to eventually be the starter. He showed a lot of toughness in 2015, while running the scout team offense. Barnett was handpicked by Kiffin prior to enrolling.

Jalen Hurts (6-foot-2, 209 pounds) was simply an emulation of Clemson’s Deshaun Watson when he arrived on campus in January, but quickly became a rockstar three months later.

According to multiple Tide players, the Channelview, Texas native bought in and began developing chemistry with others and the playbook. Hurts’ focuses paid dividends on A-Day, as fans watched the true freshman complete 11 of 15 passes for 120 yards and a touchdown.

The score came on a five-yard strike from Hurts to Derek Kief in the back of the end zone, giving White a 7-3 victory over Crimson. He’s a four-star dual threat quarterback, yet Hurts did more with his arm in the spring game. He made a big enough push in spring ball to not warrant being redshirted.

Depending on how he does in fall camp will determine Hurts’ status this season.

2. Bo Scarbrough & Damien Harris: Will Alabama have a true one, two punch at RB?

Since 2008, Alabama’s had a quality one, two punch at the running back position. The staple was lost in 2015, as Derrick Henry knew he would be the primary ball carrier going into the season.

Production from Kenyan Drake was uncertain after he sustained a broken leg injury against Ole Miss in 2014, while both Bo Scarbrough and Damien Harris just weren’t ready for the lights.

Henry made it work nonetheless, toting the ball 395 times for 2,219 yards and 28 scores. He secured the 81st Heisman Memorial Trophy and Drake had the biggest play of the season; a 95-yard kick return touchdown against top-ranked Clemson in the 2016 CFP national title game.

In returning both Scarbrough and Harris, the question will be are they mentally ready to take on the SEC. The pair are in shape physically and Scarbrough in particular, stands at 6-foot-2 and 228 pounds. He chimed in with a few strong performances in spring practice, including totaling 243 rushing yards and four touchdowns on 21 carries in two scrimmage games. Harris (5-foot-11, 214 pounds) made his mark on A-Day with 114 rushing yards on 20 carries, earning the Dixie Howell Memorial Award for most valuable player. He led all backs with an average 5.7 yards per carry.

Saban will also look to sprinkle in freshman B.J. Emmons and former walk-on Derrick Gore into the mix, but having two sophomores in Harris and Scarbrough will make the job much easier.

Alabama will have its deepest group of wide receivers in the upcoming season, hands down. It lost Richard Mullaney to the NFL and Chris Black to a transfer, but everyone else returns.

He abused Michigan State’s secondary in the Goodyear Cotton Bowl, snatching eight passes for 138 yards and two touchdowns. The 6-foot, 188-pound target finished 2015 as an All-American selection and starts this year as a preseason All-SEC and All-American via multiple sites.

ArDarius Stewart (6-foot-1, 204 pounds) began to emerge as the Tide’s second option down the stretch a year ago. He’s always been a good athlete, but it was his performance against Tennessee that warmed people to the idea of him being a good receiver. He caught five passes for 88 yards against the Volunteers, and amassed 63 catches for 700 yards and four touchdowns for the year.

Since life works better in a rule of thirds, Alabama will look for one final piece to complete its tripod at receiver. Rising juniors Robert Foster and Cameron Sims will compete with graduate transfer Gehrig Dieter for the third spot. Foster and Sims are both physical guys who had their seasons cut short due to injury. Dieter, who’s been at both SMU and Bowling Green, was one of three wide outs to have at least 90 catches for 1,000 yards and 10 touchdowns in the 2015 season.

4. With Shawn Burgess-Becker and Maurice Smith gone, who emerges in both nickel and dime?

Leadership in the secondary will come from safety Eddie Jackson.

Sophomores Ronnie Harrison, Minkah Fitzpatrick and Marlon Humphrey will accompany Jackson on defense in regular, nickel and dime formations. Eighty percent of the Tide’s alignment comes from nickel and dime. Saban wants the pass rushers to have fun, but he also wants his secondary to be physical and focused on the ball. Alabama will have a number of players audition for the role; however, the one who may probably secure it is Tony Brown.

The Texas native has the size, speed and ball skills to be a dominant player; all he needs is the desire to want to be that. He’s had his moments where he’s been in Saban’s doghouse, but the junior has finally grown up some. In 26 career games, Brown has totaled 26 tackles, two tackles for loss and three pass breakups. He’s also proven that he can lower the boom on special teams.

Deionte Thompson (6-foot-2, 190 pounds) has fluctuated between receiver and defensive back, but now he’s finally settled in the secondary. He enters his redshirt freshman year as one of the tallest safeties on the roster. Thompson brought in 15 career interceptions at West Orange-Stark (Texas) High School, including five during his senior year with two returned for touchdowns.

He’s got range and ball skills to fit in the Tide’s dime look, but there are times when Thompson can be inconsistent. Should this improve, he could be a likely starter at “Money” (dime back).

Anthony Averett (6-foot, 183 pounds) and Kendall Sheffield (6-foot, 188 pounds) both bring exceptional speed to the table, but can they body up and cover receivers. Averett tied Brown with the fastest 40-time on the team at 4.34 seconds, while Sheffield had one of the group’s best broad jumps (10-foot) and vertical jumps (37″) during spring testing. Averett, a New Jersey native, has played in seven career games. As for Sheffield, he enters his redshirt freshman season from Missouri City, Texas. Both guys are highly talented, but Saban will be the one to prove it to.

Incoming freshmen Shyheim Carter, Jared Mayden, Nigel Knott and Aaron Robinson will have much to learn. While Carter (6-foot, 190 pounds) and Mayden (6-foot, 200 pounds) look like borderline safeties, Robinson is the tallest of the three at 6-foot-1. Eddie Jackson spoke highly of Carter and Robinson at SEC Media Days, referring to both players as ones “who take coaching very well.”

Enter either Bradley Bozeman (redshirt junior) or Brandon Kennedy (redshirt freshman) into the equation. Both guys earned reps at right guard in the spring, while Taylor was battling weight issues.

Bozeman competed against Taylor and Ross Pierschbacher for a starting role at offensive guard last year. He lost in both opportunities, but still saw action in all 15 games as a reserve guard and center.

Bozeman, a former four-star recruit, has played in 24 career games at Alabama.

With Richie Petitbon recovering from a knee surgery (ACL) and Chris Owens learning the position, Dallas Warmack is the lone other name that could see a chance. The younger brother of former Crimson Tide standout, Chance Warmack, is 6-foot-2 and 299 pounds. He’s a sophomore who needs to add more muscle, but Dallas Warmack has potential to be a powerful offensive guard.