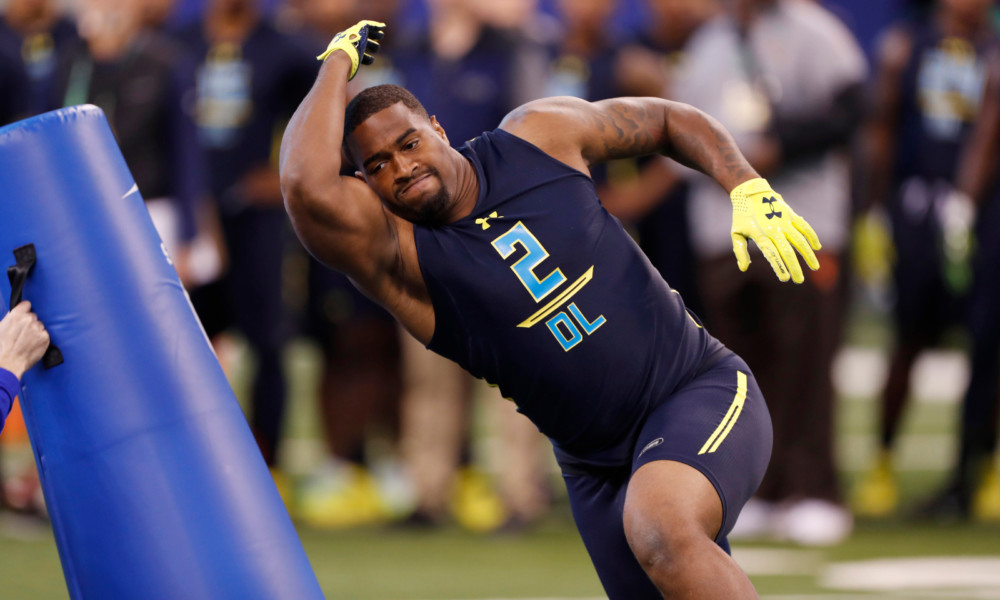 We have seen blazing 40-times, exceptional strength and plenty of interaction between prospects, scouts, coaches and media pundits, as the NFL Combine climaxed on Monday with defensive backs.

Ten individuals from the University of Alabama entered Lucas Oil Stadium with their sights on cemented a good draft stock and of the participants in question, most rose to the occasion.

With the attention shifted toward the Crimson Tide’s pro day on Wednesday, yours truly of Touchdown Alabama Magazine compiled a list of players who made money at this year’s event.

A team couldn’t go wrong with choosing any tight end from this class, but in locating who’s the cream of the crop—look no further than Alabama’s headline playmaker in the last two seasons.

Howard is not human.

After clearing the way for Heisman-winning rusher Derrick Henry in 2015 and a 1,000-yard effort from Damien Harris (1,037) last season, Howard showcased a firm inline run blocking prowess that confirmed to scouts that he’s a complete player. Everyone is well aware of his pass-catching abilities and after this week, Howard locks in as a top 15 pick.

Speed isn’t everything for offensive linemen, but in having to deal with marquee defensive ends and effective outside linebackers—the ability to move well is imperative for offensive tackles.

Robinson added 12 pounds (310 to 322) to his 6’6″ frame prior to the combine; nevertheless, he recorded the eighth-fastest 40-time of his group. The three-year starter for the Tide ran an unofficial 5.15 seconds, which included a 10-yard split of 1.78 seconds, in his first attempt.

He ended this week’s event as one of the top performers in the broad jump, tying for eighth in his position at 8’8.” Regardless of a mental lapse at times, no one can question Robinson’s strength, footwork and technique.

He’s pegged as the No. 2 offensive tackle in this draft class (25th overall) and though a multitude of mock drafts project him as a late first-round value, Robinson’s performance at Indianapolis could push him to cracking the top 20.

Say what you will about his shoulders, Allen wanted no excuses. He participated in the bench press and earned 21 reps, while displaying a 30″ vertical and 9-foot broad jump. Whether he’s labeled as a “quick twitched” rusher or not, Allen’s 40-time of five seconds is solid. Included in his run was a 1.74 seconds in the 10-yard split, which is explosive. Throughout the combine, Allen was compared to Fletcher Cox and Cameron Jordan.

Both NFL veterans were first round picks respectively in the 2012 and 2011 draft.

Cox, who enters his seventh year in Philadelphia, registered a time of 4.77 seconds in the 40-yard dash (1.65, 10-yard split) while Jordan had a time of 4.74 seconds with a 1.64 10-yard split. During on-field workouts, scouts were drawn to Allen’s quick hands, strong core and balanced technique through the bags.

In four years, Allen collected 19.5 of his 28.5 career sacks in conference play.

Williams took this combine to address one thing and in doing so, he earned respect from NFL personnel.

He was honest about his drug usage as a student-athlete at Alabama, while confirming to different teams on how it will not be an issue moving forward. Inside the drills, some media pundits thought the Louisiana native would have a faster 40-time—since he’s smaller than the individuals he’s compared to (Von Miller, Vic Beasley).

Williams tallied an output of 4.69 seconds; however, an edge rusher of his caliber should be more so judged on his 10-yard split than the entire 40-yard dash. He became known in Tuscaloosa for quickness on the edge, which led to 19 sacks and 28.5 tackles for loss in 2016. Despite both Miller and Beasley being first round picks in their respective draft classes, Williams had a faster 10-yard split than Beasley (1.66 s to 1.72 s).

In comparing the combine numbers of Williams and Miller (2011), both have similarities in the vertical and broad jump. Miller’s vertical was 3.5″ higher than Williams (37″ to 33.5″) and his broad jump was just two inches further than Williams (10’4″ to 10’2″). If one was to review Miller’s combine footage, it would see how he even had some issues working through the bag drills. Williams had one to two slip ups, but he ended strong.

A smooth pro day still locks him into a top 15-20 pick come April.

After becoming a pass rush specialist in 2015, 17.5 of Williams’ 21 career sacks occurred against SEC competition (83.3 percent). He possessed one of the fastest first steps during the 2016 year.

Other notables from combine