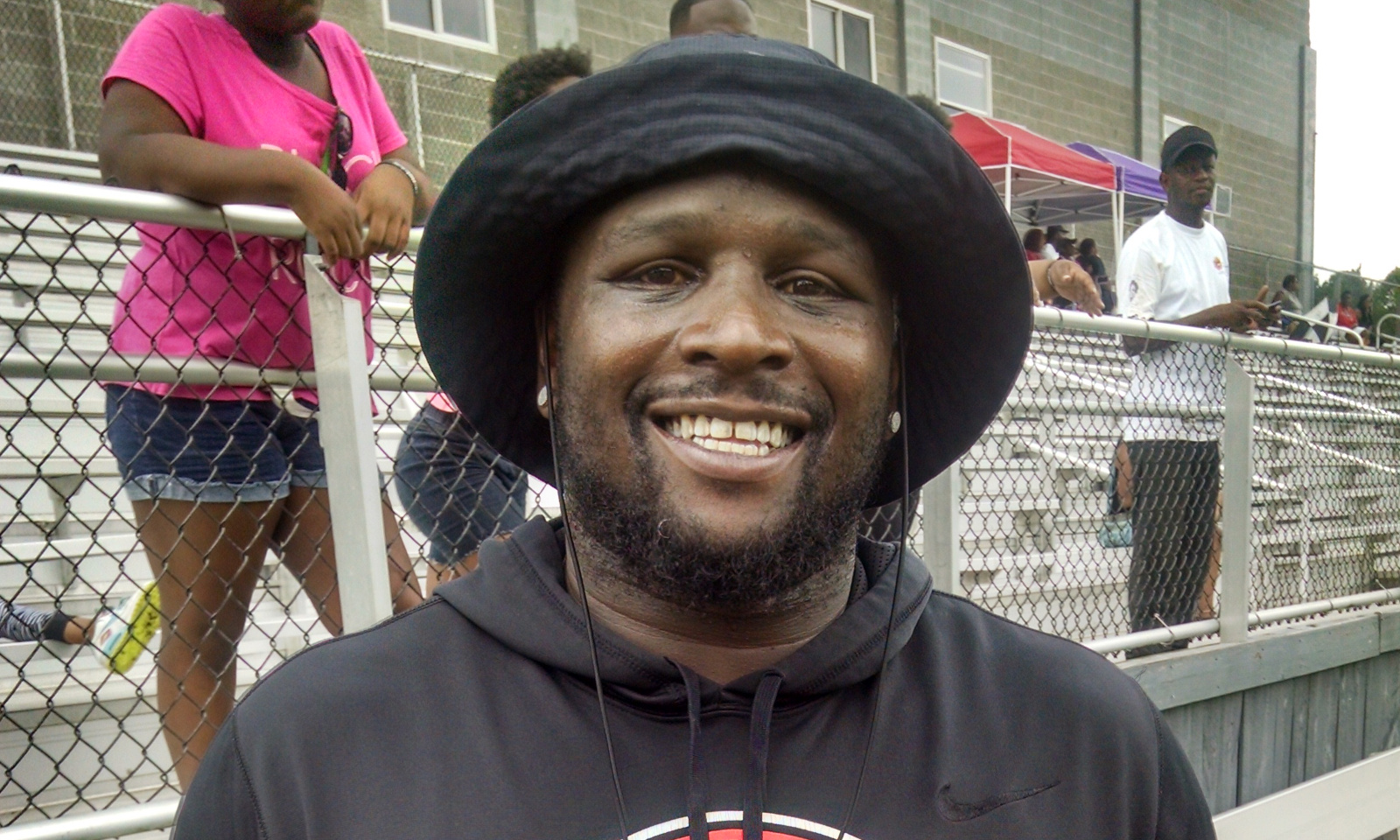 Veterans at the professional level do not want to face it. Collegiate athletes that on top of their game do not want to believe it. And even some high schoolers refused to think it. Unfortunately, all football players must understand that life goes on after the wear and tear of the gridiron.

He was born in Fort Wayne, Ind., but Le’Ron McClain’s growth took place in Tuscaloosa County, Ala. In playing for the Wildcats, McClain just knew he would be prepared for a prolific career both in college and the National Football League. After being a tenacious linebacker his junior year (2001) and an All-State running back as a senior (2002), he accepted an athletic scholarship to the University of Alabama in 2003 under Mike Shula.

While most would equate Shula to the rough moments in Alabama football, McClain saw his coach guide a Crimson Tide program to a memorable 10-2 season (before sanctions) in 2005. Following 10 total touchdowns in his Tide career, McClain was selected in the fourth round of the 2007 NFL Draft to the Baltimore Ravens.

The opening stages of his tenure with the big boys was better than expected. He was selected to two Pro Bowls (2008, 2009) and earned first team All-Pro honors in 2009; a season in which he rushed for 902 yards with 10 scores at fullback. Not seeing eye to eye with the Ravens led to McClain’s departure after 2010, and despite not finding a secure home in Kansas City or San Diego, the 32-year-old still has peace of mind.

If his best years didn’t involve millions of dollars, what has kept McClain sound?

Since being released from the Chargers in March of 2014, he’s put much focus into his football camps, coaching middle school children and his brand “Alpha Male Nation,” which he runs alongside his devoted girlfriend in Atlanta, Ga. From custom designs on hats and shirts to keeping today’s women in style with the latest in hair and hair products, McClain is quickly become the male version of Sarah Breedlove – better known as Madam CJ Walker.

“Atlanta is black Hollywood,” McClain said. “I got a couple of hair companies wanting my product. My girl and I are putting some club things together. In Atlanta, you have to have seven different ways of making an income.”

The once hardcore football player and Alabama alumnus credits his girlfriend on opening his perspective to life after the game, especially finance wise.

“I was always about football,” McClain said.

“I met her toward the end of my playing career and she was the one who gave me a swift kick in the butt. She would constantly tell me about how I could do more. Once she said that, we started Alpha Male Nation. We dropped a mission video on the project and we’ve been rolling ever since.”

“An alpha male is a role model for his family,” he said. “So when our guys wear the shirt or the hat, we want them to represent it. Success is like paying rent. You got to get out there and grind every day.”

With the increase of players filing for bankruptcy (shortly after retiring) and others struggling to manage funds, an older McClain has one piece of advice to share.

“Save, save, save. Football is a small part of your life. I thought I was going to play between 10 and 14 years, but I only played seven. Life after football was something I did not think about when I was in the league. If the girl that’s with me now would have been here early on, I would have been better. I never thought football would end for me, but my girl really helped me.”

Acceptance is another slippery slope that bites a lot of pro athletes.

Instead of making sure the ones that supported you from day one are taken care of, many players succumb to handing money to every single person that moves – including their agent.

“Be smart. Be safe. And know who’s representing you,” McClain said.

“Know where your money is going. A lot of times, your agent will be in your ear telling you what he thinks is a good idea but it may not necessarily be good for you to invest in. You pay your agent. Your agent doesn’t pay you. You have to be the CEO of your own brand.”

When he’s not pushing Alpha Male Nation, McClain goes after another one of his passions: preparing youth football camps. He’s now in 10th season throwing these activities, and with this year’s event being in Eutaw, Ala., McClain expects it to be the best one yet.

The next Russell Wilson was at Le'Ron McClain's camp. Had to capture this… Compete!

“I am running the McClain camp myself this time,” he said. “I have two volunteers with me, but I really enjoy working with kids. They really listen to you and the biggest joy I get from helping them is being able to make a difference in their character and how they treat their parents.”

“The first camp I remember Brian participating in, I gave him my cleats,” he said.

“He kept playing and got better. The next time I saw Brian Robinson, he was dominating at Hillcrest High School. Little Brian got big and now he’s at Alabama. That brought much joy.”

Free of cost is another reason why McClain loves to give back. He intends on adding a cheerleading camp for girls to his list of events, which means more No. 33 shirts.

These children came for one thing… Work with a former big time player, Le'Ron McClain.

“Every time I see a child wear a custom No. 33 shirt from last year’s camp makes my day,” he said. “And they rock it with pride. What I want people to know about me is that I’m making a difference. I want them to say ‘something is glowing about him. Something is good about him.'”

Mistakes are needed in life because it shows you how to improve, how to make things better and most importantly, who can you truly inspire. He appreciates the experience in starting a semi-pro team, but as for what he truly inspires, McClain returned to children and a smile filled his face.

“I coach a middle school in Atlanta with 6,7 and 8th graders and I love it,” he said.

“It’s a lot of stuff, but kids really listen. It’s so amazing.”

Schooling youth in the ways he learned at Tuscaloosa County High School and Alabama, McClain is already developing some studs that could grow into be five-star athletes.

“We have three offensive linemen that are high school ready,” he said.

“We have a quarterback that’s 6’4″ and 200 pounds and he’s in the eighth grade. He’ll get bigger and they will move him up to varsity. I got a running back that’s used to running upright, but after working with him for 2-3 weeks, he’s now reading the hole and slashing with power.”

Having a hustler’s mindset and championship attitude, McClain hopes to parlay his middle school coaching success into being offensive coordinator at a DeKalb County high school. Regardless of juggling family, a brand and coaching, McClain still has time for his fellow UA alumni friends. His next move in growing the people around him, as well as his own name, involves linking up with Johnny Jackson and turning JDPI into JMPI Sports Performance.

“We are going to expand the gym,” he said.

“We’re going to add an 80-yard field and get more guys in there that’s willing to work constantly. Johnny Jackson is one of few people that I can truly say I have a real friendship with. A lot of people are with you for the ride, but he carries my best interest at heart. He’s going to tell me what is right and what it wrong.”

McClain is scheduled to be in Tuscaloosa, Birmingham and surrounding areas and with his girl’s help, both will be investing in different things and starting up companies.

And just when thought homegrown talent could not get any bigger, McClain recently added podcast show host to his repertoire. He’s entitled the new endeavor, Beyond the Jersey, and will be release the first airing of it soon.

The football days, which consisted of running out the tunnel, scoring touchdowns and possibly winning a Super Bowl, may be over but McClain has achieved one critical thing: contentment. He may not be popping bottles in the club or cashing million dollar checks; nevertheless, he has a valued woman in his life as well as his children.

“I’m not in the league anymore,” he said.

“I’m just a regular every day guy. I’m a business man and I thank God for everything.”