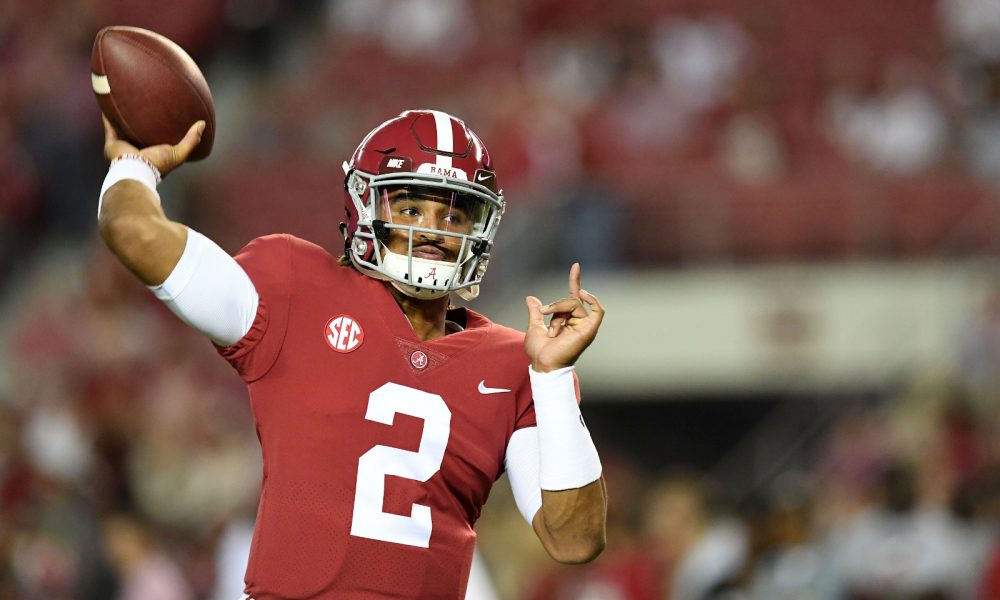 TUSCALOOSA, Ala.– If one was looking solely at his completion percentage from over the weekend, the basic thought would be Jalen Hurts struggled to complete passes.

Last season, his legs put the team on his back as he totaled 114 yards rushing on 20 carries – including a 21-yard touchdown in the fourth quarter to give Alabama its first lead.

Excluding the 11 of 24 passing statistic, Hurts’ ability to consistently throw the football with confidence took center stage in a 24-10 win at Bryant-Denny Stadium.

With the Tigers negating Alabama’s rushing attack, Hurts connected on his first four passes for 80 yards – which included a 47-yard completion to freshman Henry Ruggs, III that set up the Tide’s first touchdown of the game.

Offensive coordinator Brian Daboll went back to the native Texan to start the second quarter, and Hurts delivered a 24-yard strike to junior Calvin Ridley that resulted in a 9-yard score from running back Bo Scarbrough on the following play.

Alabama’s third touchdown drive of the contest provided another first-hand look into Hurts wanting to be an effective passer. Despite his 31-yard hookup to Ridley being removed because of a penalty, he returned with two strong throws – especially the 15-yard completion to senior wide receiver Cam Sims on third down. Four LSU defenders were in the area on the throw, however, Hurts found a way to thread the needle to Sims for another third down conversion.

Hurts also converted four of the Tide’s five third downs (14 attempts) with his arm. He averaged 16.6 yards per completion, and if not for a number of drops, his completion percentage and passing yards would have been higher.

According to head coach Nick Saban, he said it was LSU’s discipline with having eight guys in the box that allowed Hurts to have good game.

“He made some really good throws,” Saban said of Hurts.

“One of them got called back that was a big play, but when people play you like that sometimes it gets big, little. You make some big plays and then it gets ugly in between so, that was kind of how it was today. I thought he did a really nice job.”

As it stands, Hurts protected the ball, accounted for two scores and navigated Alabama to its ninth win of the season and seventh consecutive victory over LSU. He was one of nine players named for weekly honors this morning, courtesy of the Tide’s coaching staff.

Hurts has turned in 17 total touchdowns, and his two over the weekend have moved him to 52 career scores. Hurts, who is 22-1 as a starter, will lead the Tide against Mississippi State next week.