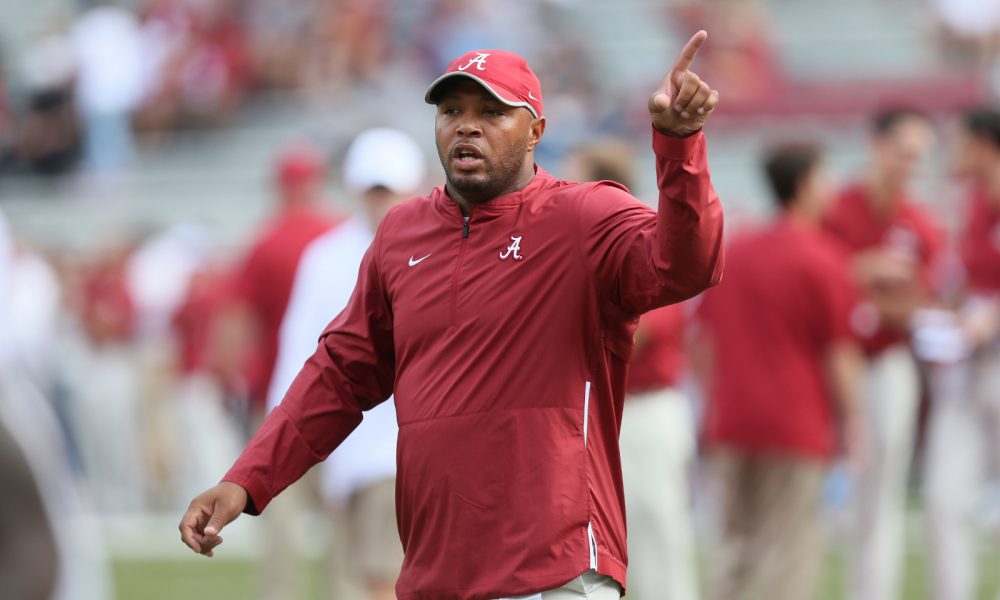 The wait for him to become a head coach will not be much longer; however, Josh Gattis is graciously enjoying his job as he’s orchestrating the best group of receivers in college football.

One of the things noticed by yours truly about Gattis in the spring was his transparency.

“He wants everyone to do well,” one source in particular said of him.

He built success at major division one programs such as Vanderbilt and Penn State; nevertheless, his savviness and passion has created the most exciting season offensively for the University of Alabama football program and its fans.

Everyone knew how talented Jerry Jeudy, Henry Ruggs III, DeVonta Smith and Jaylen Waddle were out of high school, but the 34-year-old’s purpose was ingrained in work ethic. Donning a black and red jumpsuit, Gattis would constantly yell things like “drag the route out” and “you guys must finish plays.”

He is the one that desires for all to excel, yet he also knows that productivity comes from not buying into your own hype.  Throughout the summer, Jeudy was challenged. Gattis stayed on him day and night in pushing him to become a leader.

Despite the and former five-star knowing his talents, Jeudy put on muscle, tightened his hands, improved his speed and fine-tuned his route running.

“I have never seen Jeudy work this hard. He’s in the workout facility more than me,” another source spoke during the summer.

He never wants to disappoint Gattis and it is the reason for Jeudy being second in the Southeastern Conference in catches (31) and receiving yards (777) while leading the league in touchdowns with 10.

He was added to the Fred Biletnikoff watch lists, and is on the verge of supplanting former Tide standout, Amari Cooper’s single-season scoring mark (16) in 2014.

When a coach gets every inch of production from of his highly-regarded pupils, it compels everyone else to follow suit.

Not to say Ruggs, Smith and Waddle aren’t taking things seriously, but seeing how Gattis makes sure each player is in the right spot upon Tua Tagovailoa releasing the ball is impressive. All three wide outs have been featured a multitude of times on Pro Football Focus, and Waddle (freshman) stands 10th in the SEC in receiving yards with 457.

With him sharing offensive play-calling duties alongside Michael Locksley, Gattis is watching a team that is averaging 54.1 points and a mesmerizing 564.3 yards offensively. As he prepares to face his former employer on Saturday, Saban is very glad that Gattis is a part of his structure.

“He’s a very bright guy. He has been in some good systems. He has a good understanding of the big picture offensively. He’s very technical in terms of how he coaches and teaches his players and he’s got a really good personality.”

“He can confront guys when they are not doing things the way they are supposed to do them, and I think that has created a lot of consistent in our receivers and improved their toughness. We have some good players and he has got them playing well.”

From being under James Franklin to learning from Saban, Gattis is certainly building quite the resume as a young assistant. His plans to attack LSU at Tiger Stadium will be a sight to behold.