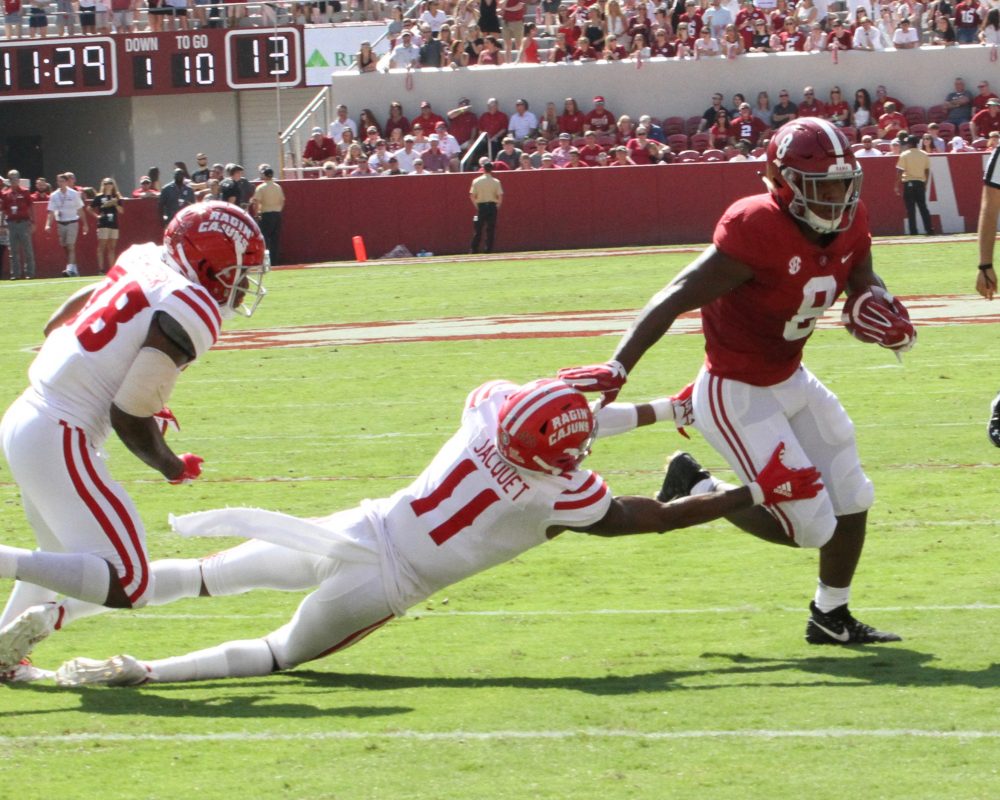 It’s alright to hate the SEC and other’s cupcake games, but read why maybe it’s not all bad after all. See if you agree with the reasoning.

This is cupcake week for a lot of colleges, but mostly in the SEC. Yes, it’s a week of yawning for viewers and lots of empty seats in the stadium. Other conferences make fun of the SEC for being one of the leaders in this. They say it’s a guaranteed win that get many teams that important sixth win and bowl eligibility, they say that’s the reason they won’t play an ninth conference game like other conferences do.

Other problems are as mentioned, low attendance and fan frustration. You can find season ticket holders that will simply give away their Citadel tickets because they know they are virtually unsaleable. Coaches, especially Saban, will be upset with the low turnout and lack of fan support. He’ll say the team gives 100% all year long, so the fans should do that too and if that means supporting them against Citadel.

Networks pay big money to broadcast games, yet they know that viewership will drastically dip during these games and they won’t get their money’s worth.

Concession vendors only get so many home games and a lower crowd means less money to them too, but the police departments still have to put out the same kind of manpower and costs for a much lower attendance.

You could go on and on and on about why these cupcake games are so bad for not just Alabama’s image but the whole SEC, but there are some good things and it’s time that someone, even an author that hates them very much, defends these games by explaining why they are a good thing. While these arguments may not change your mind entirely they may make you feel a bit better about them.

Most people’s first take on the good thing is that small schools get a big check for such a game and there is that. Southern Miss and Western Kentucky made 1.9 million dollars for coming to Tuscaloosa and leaving with a few lumps. For a school like Western Kentucky, their entire athletic budget for all their sports is 23.3 million dollars. That rates 11th best of the 12 schools in Conference USA. Yes, they are cash strapped and this game against Alabama represents about 9% of their total budget. So for them, this game was a God send.

For big schools like Alabama that make so much money, it’s nice that they can funnel a little of that money down to some of the little teams. To some of those teams, it’s lighting the practice field for night practices, it’s a new weight room or redecorating and refurbishing a player’s facility.

But for some of those little teams, it gives their boys a chance to be on national TV on a major network where they might not get that kind of exposure elsewhere. It gives their players the memories of playing in a 100,000 seat stadium and playing one of the nation’s top teams. Talk about a lifetime of memories from just one game, it’s sure worth the lumps. For coaches, it’s a teachable game where you show your own team just where they are and what they need to do to take the next step up.

But it’s not just all about the little schools. Let’s look at what it does for the big boys.

There is truth that this late season cupcake games in the SEC helps teams make a bowl appearance by supplying that all important sixth win. Unless your in coaching, it’s almost impossible to stress the importance of making a bowl game, any bowl game. The extra practices a bowl team gets gives such a leg up on teams that don’t get them. It’s almost like an extra spring practice.

Then there’s the bowl money to help with budget, that’s a big boon for a lot of smaller schools. Also there’s the recruiting advantage of showing recruits that if they come to your school there’s post season play involved. The excitement caused from bowl games does impact recruiting as any coach will tell you. It also gives the fans something to celebrate too. Plus, players who graduate early from high school can practice with the team getting them a leg up on other freshmen and gaining more experience with the playbook and process the team uses in practices and more. There’s just so much more, but you get the idea.

Plus these cupcake games give a lot of walk on and practice players who don’t get to make road trips, who often don’t always get to see the field even in home games to finally get to contribute in live minutes. These games are a payback for those those players. They do so much all season long and for many this is their chance to finally take the field get photographed playing the game and have their backs slapped for a change. They will then have some photos and memories they can talk about forever. If this were the only reason to somewhat like a cupcake game, it might be enough.

Yes, it does give the starters a chance to rest and by this time of the year, they certainly need it. Alabama for example, will play an SEC Championship that 12 other SEC teams won’t play. Then if they do make the playoffs, they have one more game than all 128 other teams won’t play by virtue of having a semi final and then a final game, while all other bowl teams will just have one post season game, so they could use some late season rest.

But for Saban, it’s all about continuity. Tua will play and prep and do everything he usually does every week, he may just not play as long. But next week when Alabama preps for Auburn, Tua and the other starters won’t have to restart anything, they’ll prep and practice like they always did, even in these cupcake games. Saban’s process doesn’t have an off week. But the backups, walk ons and practice players will get a little more love and a little more playing time.

Lastly, there are folks who use the opportunity of free or really cheap tickets to take a whole family to the game where they may not otherwise could. For others, it’s a chance for they themselves to finally get to go to an Alabama game. The tailgating experience all the way through to filling those seats, soaking in the band, the cheering and PA system is still exciting, even if the opponent is the Citadel.

So it’s alright to hate the cupcake games, but maybe now you can love some of good that comes from it.