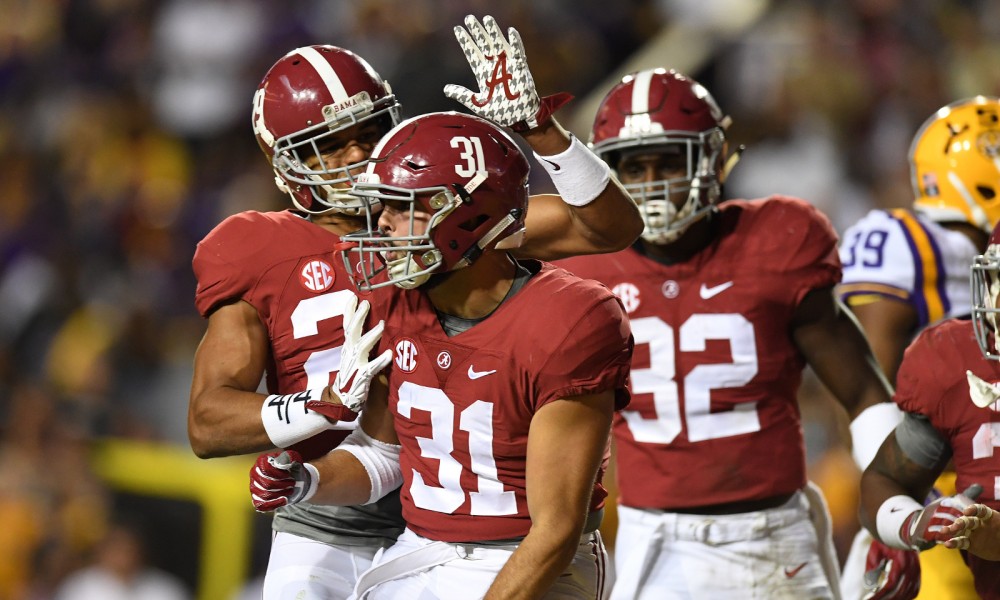 After not revealing any particular plans about the dime package for Alabama this weekend versus Georgia, head coach Nick Saban singled-out Keaton Anderson as a player that he feels can the handle the challenge limiting the Bulldogs’ offensive weapons.

Despite being signed as a linebacker in 2015, Anderson has spent the last two years high-pointing passes in practice as a safety. The 6-foot-1, 196-pound junior proved to be a staple on kickoff and punt coverage as a redshirt freshman in 2016 and has been the Crimson Tide’s most consistent player on that side of the football.

Anderson accounts for 20 career tackles, with 13 coming this season and most of them on special teams.

Hailing from Florence, Ala., the former three-star held his own against Auburn, assisting a secondary that held Jarrett Stidham to just 127 passing yards.

Wide receiver Ryan Davis was non-existent with 15 yards on four receptions, despite catching the Tide off guard with a touchdown pass. Darius Slayton had the lone big play for the Tigers – hauling a 52-yard catch and run to the end zone.

He may not have the athleticism of recent Alabama stars in the defensive backfield; however, Saban thinks Anderson will do just fine against Georgia.

“He did a nice job for us in the last game when he had to go in,” Saban said of Anderson.

“Keaton is one of those guys who is a great student, he has tremendous character, he is a good person and a good leader. He’s been a core special teams player for us for several years and has continued to work to be in a position where he has a chance to be successful playing the safety position. I think he is very capable of playing well in the next game.”

Defending the likes of Riley Ridley, Mecole Hardman, Terry Godwin and Jeremiah Holloman is no easy task, but Anderson is a competitor. Following his targeting foul on last week, Jared Mayden will watch his backup get the start in the first half. Should the Tide line up in dime more than what is expected, Anderson could have a shot to create some marquee plays.