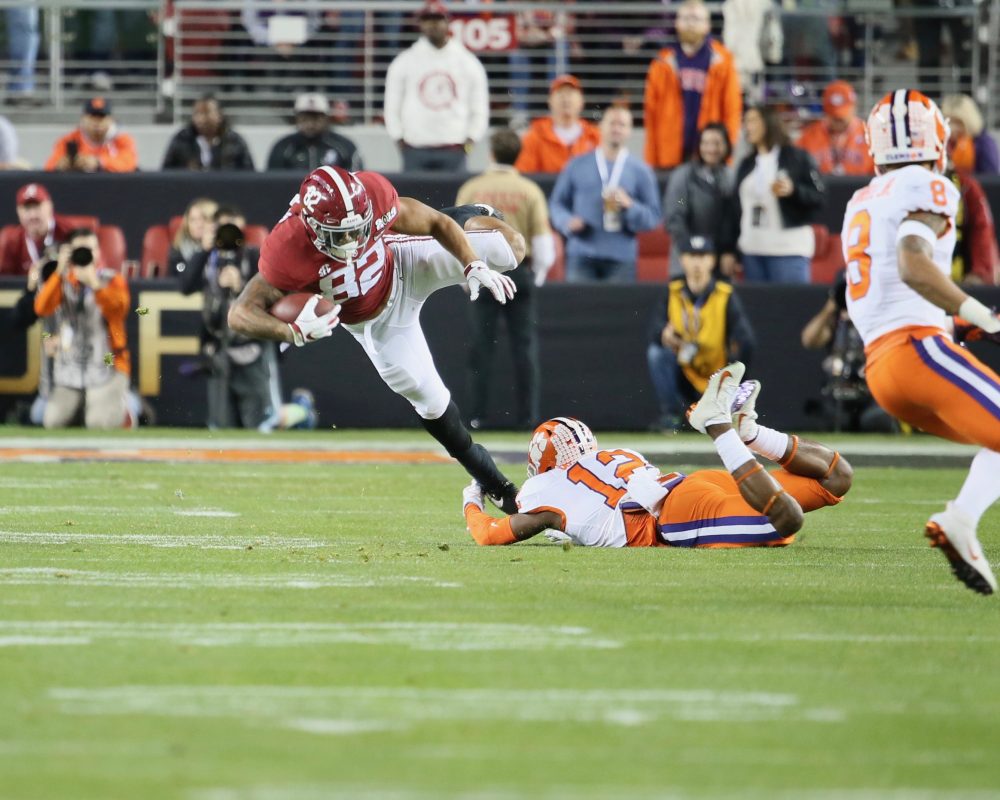 This was a championship game worth the two Titans that battled in it. There was no real underdog, just two Goliaths battling for the top spot.

No David vs Goliath in This College Championship

Though some may argue that this matchup is getting old and that Alabama / Clemson fatigue may be a factor, this was a game that was truly deserving of a championship venue. This was no David vs Goliath, there was no Cinderella team in this one and there really wasn’t a true underdog to pull on your heartstrings.

This was Goliath vs Goliath, the last two undefeated teams left standing, clearly and without a doubt the two best teams in college football playing for the undisputed championship. These were both two teams laden with future NFL talent, great coaching staff and year of vanquished opponents and a season long pedigree of statistics that also proved the two best teams were both there to finally end this debate.

In the first quarter of the game Alabama miscues gave the Tigers and eight point advantage. Seven with an interception for an easy touchdown and then an Alabama missed extra point. In doing so, they let a freshman quarterback shrug of a bad start and settle in hit a long pass that finally set up the offense for a score of their own.

But clearly, the first quarter proved that the only thing that could stop Alabama was Alabama, at least on offense. With the ball on the one yard line, an offside penalty them cost them seven points but as the second quarter started, Alabama finally took the lead for the first time 16-14.

But Nick Saban was clearly not happy. The Alabama defense had stopped Clemson hard and fast on every possession but one and Alabama moved the ball at will and yet had only a two point lead to show for it. The cardinal rule in a championship game is not to let the opposing team keep within a quick score taking the lead back, but that was just what the Tide was doing. They were absolutely dominating the game, not just the scoreboard and Clemson was still in the game.

And on the next drive with the aid of a kickoff out of bounds, a pass interference penalty and a blown coverage pass completion, Clemson did just what Saban knew they were capable of doing and took the lead back 21-16.

The writing on the wall was becoming clearer however, Clemson was totally unable to stop the Alabama offense and was unable to hold the Tide to a punting situation. If Alabama could simply stop the silly miscues on offense and the blown coverages on defenses, the day would be theirs.

When Alabama got the ball back three running plays left the Tide a fourth down and one on their own 35 and made it. In doing this Saban made three statements, one, that he didn’t feel Clemson could stop them from making one yard when they needed it. Two, that he felt the need to hold serve on offense and three, keep the ball away from a Clemson offense that was growing in confidence and strength as the game went on.

Then Tua did another very un-Tua thing and threw his second pick of the day. And Clemson’s offense did exactly what Saban had feared and showed the ability to move the ball and another monster from Alabama’s past began to show itself in that Alabama couldn’t stop a team when they needed to on third down as Clemson’s march toward making it a two score game became a reality and now the score jumped to 28-16.

Now with four and half minutes to go in the half, with Alabama’s defense on their heels, the Tide needed a long touchdown drive to pull the game back close and get out of the half without any further damage. The question was, could Alabama stop killing their own drives?

The answer came quickly as Alabama had a very quick and ugly three and out that consisted of a yardage losing running play, another run and a sack of Tua. Finally Alabama was stopped, not by their own hand, but by the Clemson defense who was feeding off the energy given them by an offense that had clearly caught fire and Alabama punted for the first in the game.

Dabo Swinney, the coach of Clemson, knew this was his chance to perhaps put a nail in Alabama’s coffin if they could score yet again before halftime and take a three score lead into the locker room. A long pass showed Clemson’s hand in that this was indeed what they intended to do and not sit on a lead with less than two minutes to go. Another long pass was further aided with another 15 yard hit out of bounds and just like that, Clemson was ready to drive that nail.

Instead of buckling down, Alabama’s next play was another penalty as they jumped offsides, another pass across the middle put them in the red zone and Saban’s worst fears of how he didn’t want the half to end were all coming true, but when he needed them to at least hold them to a field goal, they did and the half looked to be ending 31-16 keeping it to a possible two score game. And that’s indeed what happened as Alabama was content to lick their wounds and go to the locker room and hope that their record of second half adjustments would once again help them bail out a bad situation.

For Alabama to make a game of this, they needed to take the opening kickoff and score. That was looked like what they were going to do before the drive stalled and a fake field goal went bad. Instead of playing to what had been their strengths, the trick play was simply disastrous.  To make matters worse, once again Alabama gave up another big play for a touchdown and suddenly it was 37-16. To add insult to injury quite literally, Savion Smith went down and left on a golf cart and Alabama scanned the bench for someone to take his place in the defensive secondary.

Down three scores and over half the third quarter, Bama once again moved down the field. The refs missed a Clemson holding call that would have given them a much needed first down in the red zone and on fourth down, Tua rushed for just one yard too little and the ball went over. Now the question with the Tide literally drowning in their own mistakes was is their defense could stop the red hot Clemson offense.

The other question was would Dabo go conservative with a lead? The answer was a resounding no. Another long pass on yet another third down proved Clemson was not going to take their foot off the gas or the other one on Alabama’s throat.

The march continued as did Alabama’s inability to stop them on third down and quickly the lead was 28 and Alabama’s quest for a continued dynasty seemed to be all gone, eroded by interceptions, silly penalties and bad play calls. Not only was their undefeated streak slipping away, so was their composure as some of the silly penalties were after the play lack of character personal foul penalties.

Since Alabama’s last score, Clemson had countered with 30 of their own. The Tide owned the time of possession by almost a whole quarter but had little to show for so many drives. Alabama had shot themselves in the foot so many times and Clemson was right there to take advantage of them.

As the fourth quarter began, Alabama finally put together a drive and once again left a red zone opportunity to ruin with a very stupid play call. They ran Tua, clearly not his strength, instead of throwing it in which is his strength. It simply summarized the entire the entire game. With every slight miscue in play calling or execution, Clemson was there to take advantage of it. Though there was a lot of time left on the clock, the game was essentially over.

Once it was over Clemson finally dropped a third down pass, but giving the ball back quickly to Alabama didn’t seem to matter. The look of the players in Crimson on the sideline seemed to show an acceptance to the inevitable.

Jalen Hurts came in, perhaps Saban was hoping for another backup quarterback miracle, but that dream to seemed to turn into a bad dream as Hurts too was three and out. In the second half of this game, it was Alabama who was helping Clemson kill the clock while putting up no points.

Finally, Dabo took his foot off the gas, was content to run the clock, speed the end to Alabama’s misery, but even in doing that, Clemson ripped off big yards with the running plays. The game ended with Alabama’s defense out of gas and without a clue of how to stop the Tiger offense. On the other side of the coin, Alabama’s offense piled up impressive yardage numbers, but never managed to dance into the end zone enough, tripping over their own feet on far too many occasions.

With the win, Clemson proved they were the best of the two Goliaths. But even in a mind numbing loss and unthinkable beatdown, Alabama proved that they were a Goliath worthy of the the championship fight. Both teams proved that these two teams could very well be back next year for yet another round of battle to decide who is the best of the big two, but today it was clearly Clemson’s day, Clemson’s year.