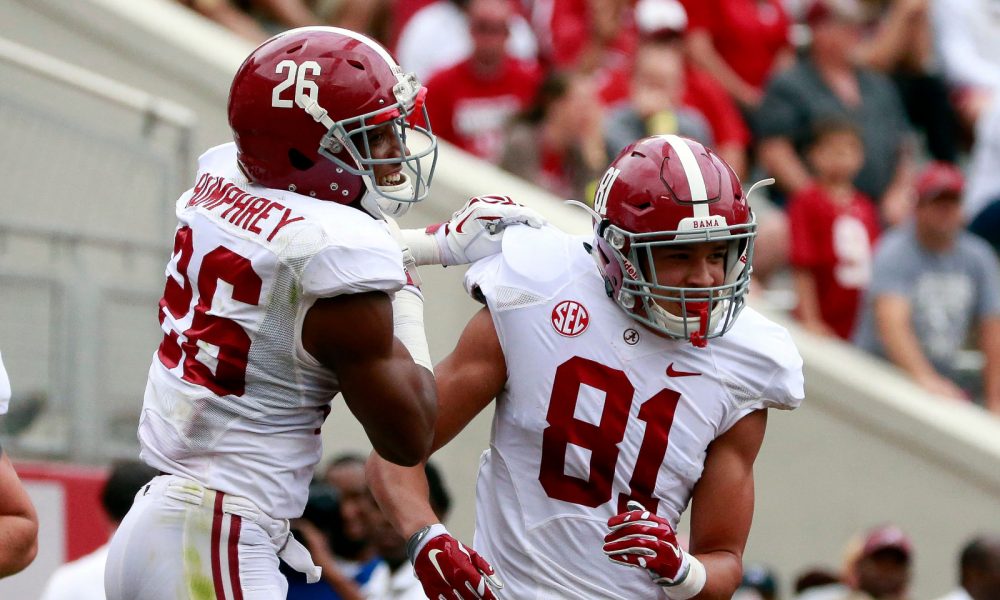 Even for the ones who do not get drafted to the National Football League, opportunities come to those that have played under Nick Saban.

His connections with coaches, scouts and executive members of different franchises goes a long way for players who represented Alabama well.

Derek Kief, a native of Cincinnati, Ohio, was one of the nation’s top high school recruits at wide receiver in the 2014 cycle. Despite the product of La Salle High School listed at No. 199 on the ESPN 300, he never got the chance to blossom in front of fans at Bryant-Denny Stadium.

He was hampered by injuries, like Cam Sims and Robert Foster before him, but the 6-foot-4 specimen managed to still be a stalwart on special teams while totaling 104 yards receiving and one touchdown on eight catches for his career.

Kief saved his best performance for Alabama’s Pro Day on March 19, as he impressed scouts with his hands, speed and athleticism.

When it came to catching drills, Kief snagged every pass in his direction and provided much savvy in his route-running capabilities.

He received great news on Tuesday, as the Buffalo Bills decided to invite him for a tryout.

After not being selected in the 2018 NFL Draft, Foster would be signed to the Bills and made the practice squad.

He ended up being promoted to the active roster on Sept. 9 (vs. Baltimore) and collected three 100-yard performances as a rookie.

Thankful for this opportunity ?? pic.twitter.com/FiwoTlfK9A

Foster tallied 547 yards and three scores on 27 catches. With the Bills cutting a couple of receivers from its roster, the Pennsylvania native opens next season as the No. 1 target.

Kief has a chance to create the same success. Best wishes to him.

Shawn Murphy’s Alabama offer comes out of nowhere
Pro Hall of Fame RB “excited” to see Josh Jacobs with the Raiders
To Top
%d bloggers like this: