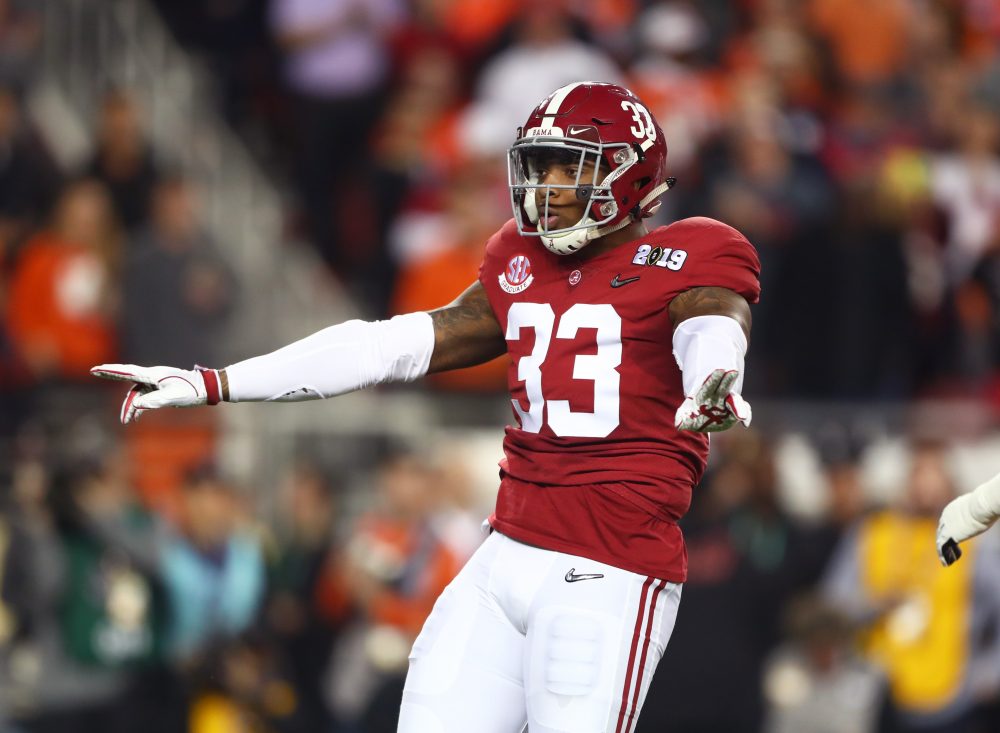 The next defender will be Anfernee Jennings.

Returning for one last year, Anfernee Jennings is one of the unquestioned tone setters among Alabama’s defense. There is no better way to make your presence felt than being extremely physical at the point of attack and absolutely stuffing the run.

Jennings is among the best edge run defenders in all of college football. He does a great job with hand placement and pad level, making sure he does not get moved off of the line. It almost isn’t fair to ask a tight end or running back to be responsible for Jennings. It’s hard enough for 320-pound tackles to try and engage him.

What also goes overlooked when evaluating the former four-star recruit are how good his pursuit angles are. The play isn’t over until the whistle is blown and Jennings is a prime example of playing to the whistle. Even if the ball is handed off in the opposite direction Jennings doesn’t quit and comes flat down the line to make the play.

Despite how well he performs in the run game, there is another aspect of Jennings game that may go overlooked by some. For those who may not know, Jennings has some of the best instincts and anticipatory skills on the team.

He always knows how to adapt to a broken play, he always knows where the ball is going but the most impressive part is how he is able to read the quarterbacks eyes in the passing game. He may not have an overwhelming amount of sacks but Jennings is great at batting down passes.

This was one of the break out parts of his game in 2018 for he caused 11 pass deflections which were number one on the team. He was followed by five defensive backs and the next non-member of the secondary was Mack Wilson who had five.

Jennings has also been accustomed to showing up when the team needs him the most. Against the Citadel, there was no question that Alabama was struggling to slow down their complicated heavy run offense. But it was Jennings who came up huge in the second half finishing with 11 tackles.

The very next week was the Iron Bowl. Auburn has been known for having success running the football against the tide in recent years and what did Jennings do? He tallied eight tackles and a momentum-killing interception.

If there is a big game on the schedule, this guy shows up.

Although Jennings is elite when defending the run, the same can’t really be said about his pass rushing skills. When studying his game tape, Jennings definitely isn’t your ideal third down outside linebacker. He isn’t very quick with his moves and for the most part, is there to sit on the edge and contain the quarterback.

Even though the had 5.5 sacks on the year, for the most part, he was waiting around for the quarterback to fall into him. Now, this could very well be part of Nick Saban’s scheme but there is definitely a reason that Jennings plays that role.

His lack of speed also doesn’t help him in this department. Unlike fellow outside linebacker Terrell Lewis, Jennings is not as consistently explosive when rushing the quarterback.

Unfortunately, Jennings coverage skills don’t make up for his average pass rush. The rare times which Jennings falls into coverage you can definitely tell he is much better suited when engaging an offensive lineman.

For better or worse Jennings is more than likely going to be your traditional two down edge defender. He will have no problem making a big impact during the 2019 season but how will that impact his draft stock?

Jennings is one of the most experienced players on the crimson tide let alone among the defense. Just like what Nico Johnson said during one of the latest episodes of In My Own Words with our own Stephen Smith, he expects Jennings to be one of the tone-setters on the defense this year. It’s tough for me to disagree with the former Alabama great.

Jennings will be another big piece in helping Alabama recover from a tough defensive stretch near the end of last season. His supreme instincts and strength will help bring Alabama back to defenses of old, which would first and foremost be unconditionally physical. Another thing to keep in mind will be his experience in big moments. There may be a chance that a couple of younger edge players will get an opportunity to see the field this fall. Jennings can have a big impact bringing them along whether it’s by leading by example during practice, or by having big performances in the biggest games.