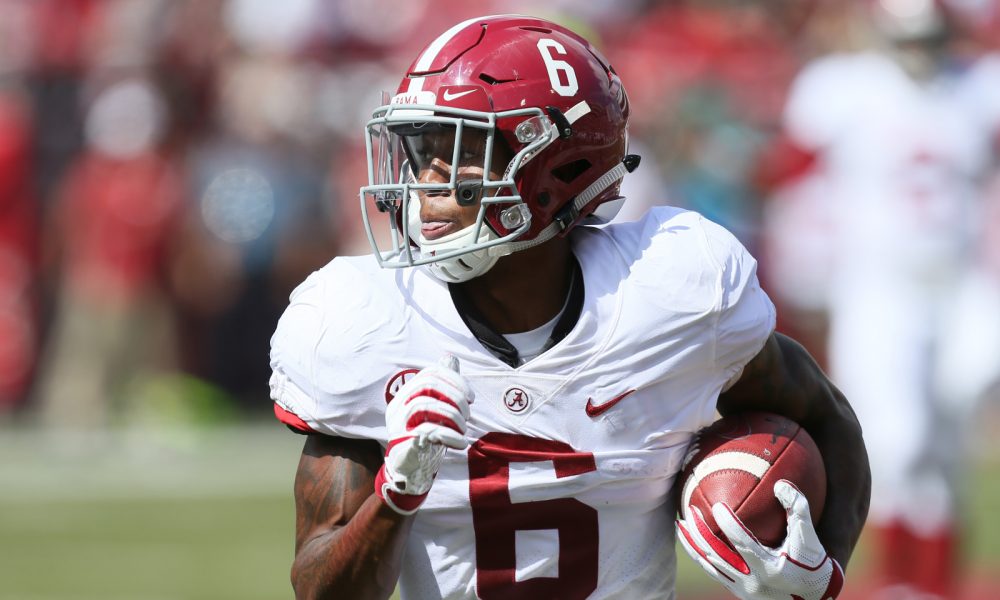 Summary: Of the four talented starters at receiver for Alabama, DeVonta Smith is not mentioned a lot. However, the Louisiana native is unarguably the most reliable target in crucial situations for Tua Tagovailoa.

Smith does not talk much, but his hands have done a lot of conversating through two years as he has 49 catches for 849 yards and nine touchdowns.

His hands were the first thing noticed by yours truly of Touchdown Alabama Magazine two years prior at August camp. As a freshman, Smith snatched everything in his reach and possessed the ability to turn and quickly get upfield after making receptions.

Former Tide player Cam Sims said Smith would be a beast in 2017 and he was not lying, especially with how the once four-star prospect was on the receiving end of two game-winning scoring tosses from Tagovailoa and Jalen Hurts.

His 41-yard score versus Georgia in the 2018 College Football Playoff National Championship in overtime delivered Alabama to a 26-23 win. Smith built off his freshman campaign by tallying 693 yards receiving with six scores on 42 catches last season.

He finished third on the team with an average of 16.50 yards a catch.

According to Damien Harris, the 175-pounder is also not afraid of squaring up a linebacker or defensive back to get a block for his teammates. Smith’s toughness was on display throughout 2018 as he was seen setting the edge on screen plays, blocking for running backs, and even securing a crack-back block to spring a receiver down the sideline for a potential touchdown.

Efficiency is what separates Smith from his counterparts.

Twenty-six of his 42 catches in 2018 went for first downs or touchdowns, which equals out to 62 percent.

He was tied for second on the team in receptions for 20+ yards – totaling 14 of those.

Smith rarely drops a pass and upon making a reception, there is no wasted motion with him.

-Lack of diversity in the route tree

Summary: Smith, like Tua Tagovailoa, has to record a full season being healthy.

He missed a couple of games last year (hamstring) and though he returned strong against Oklahoma in the College Football Playoff semifinal, Alabama could have definitely used him versus Tennessee and LSU.

Having Smith at 100 percent could be the difference between him being looked at in the middle of the first round versus getting a second to third-round grade.

In his two years with the Tide, Smith is categorized as a “deep threat” receiver.

This means that he is typically in go routes or post patterns. He may run a slant or make a reception off a drag route, but there is not much diversity in his route running.

While it is solely not his fault, NFL scouts want to see if he can execute each route to perfection and prove that he is an asset to the quarterback – no matter what situation is given to him.

To pair with staying healthy, a 1,000-yard season has to be an expectation for Smith.

It will be hard to accomplish – seeing how he shares the load with three others – nevertheless, productivity is a big deal to him. As NFL pundits continue to discuss Jerry Jeudy and Henry Ruggs, Smith looks to push his way into the first-round conversation.

Should he have a year where he becomes an All-SEC selection, the doors will definitely open for him.

DeVonta Smith finds different ways to make a statement on a program that is littered with premiere talent at wide receiver. He has made two game-winning catches thus far in his career and garnered the reputation as the receiver Tua Tagovailoa looks for at crunch time.

Aside from a small hamstring issue, Smith gives the Tide both an efficient pass-catching target and exceptional blocker. Regardless of his stature, his simply about football and doing all things necessary to help Alabama win.

He anticipates getting back to the CFP National Championship and finishing the job for his second ring.