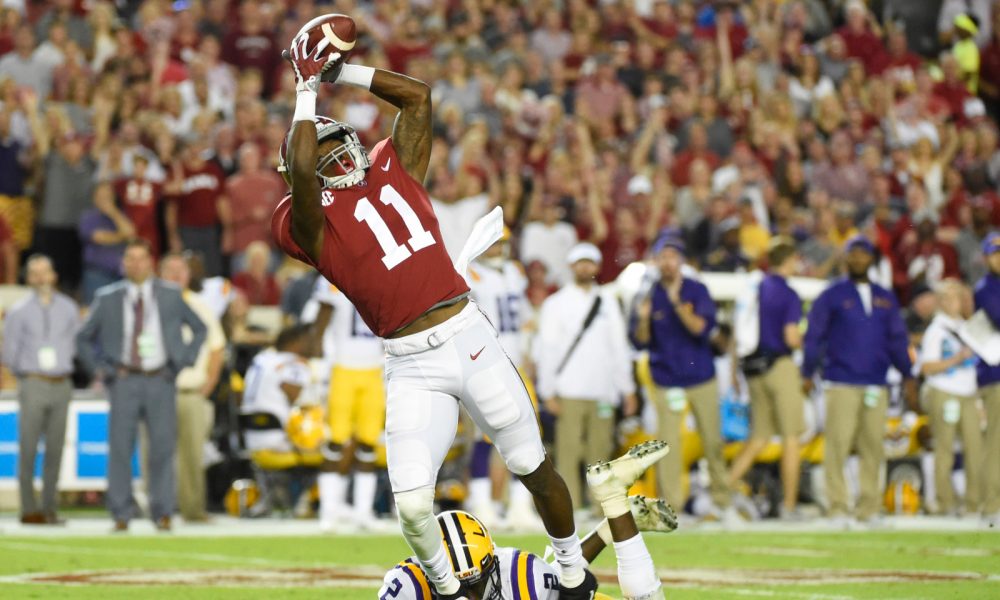 Summary: He came in Alabama’s 2017 signing class with Jerry Jeudy and DeVonta Smith, but there was something uniquely special about Henry Ruggs III. A five-star (247Sports) from Montgomery, Ala., Ruggs was a two-sport athlete with football and running track.

He turned in a strong contribution as a freshman – leading the team in touchdown receptions (six) while posting 229 yards on 12 catches.

After helping the Crimson Tide win a national championship, Ruggs improved on his numbers last season as he finished second in receptions (46), third in receiving yards (741) and second in scores (11).

He averaged 16.11 yards per catch and his 11 touchdowns, which tied for third all-time for a season in school history, assisted Alabama to a Southeastern Conference title and its fifth trip to the College Football Playoff.

He defeated teammate, Jaylen Waddle, in a highly-anticipated race this offseason.

Ruggs gave the sophomore all the smoke he has burned opposing defensive backfields on throughout the 2018 season. He has the ability to explode upon the snap of the ball, get to his spot on the route he’s running, and switch to a different gear to leave defenders catching air.

Although the touchdown was revoked due to a penalty, Ruggs’ 83-yard burst to the end zone at Bryant-Denny Stadium versus Missouri is a prime example of his speed. He quickly caught a screen pass from Tua Tagovailoa, picked up a block and turned on the jets. Tide fans were disappointed with the score taken away, but were impressed in seeing Ruggs’ top-end speed.

Holmon Wiggins will pick up where Josh Gattis (now at Michigan) left off in working toughness among with this group of receivers; however, Ruggs has shown resiliency his entire life.

He lost his best friend, Rod Scott, before starting college at Alabama and recently lost his grandmother.

Ruggs deals with the pain by being a physical blocker and having the durability to take hits while securing passes in traffic.

He has not missed a game through his first two years.

Winning the battle of 50/50 balls has become a specialty for him.

Ruggs enjoys coming down with contest catches, especially outmuscling a defensive back for a reception in the end zone. His ability to elevate and pluck passes out the air gives Tagovailoa confidence in him as a primary target.

Seventeen of Ruggs’ 58 career catches (29.3 percent) have resulted in touchdowns, which is nearly one-third of his production.

Summary: Like Jerry Jeudy, there is not a glaring weakness for Ruggs.

He may have some small issues, like dropping a pass at times, but he’s not a liability in critical situations.

More defensive coordinators will have film to scheme out Ruggs; nevertheless, it still takes consistency on the behalf of players to stop his productivity.

He made the All-Freshman team for the SEC last year, so becoming an All-American should be next on Ruggs’ to-do list in college football. Another thing he would like to accomplish is earning 1,000+ yards in receiving.

Despite sharing the wealth with four others, Ruggs came just 259 yards shy of the mark in 2018. The departure of Irv Smith Jr. to the National Football League could potentially set the returning junior for a shot at more yardage next season.

Above all else, recapturing a national title is first on Ruggs’ mind.

Alabama football seeks to have two receivers drafted in the first round of next year’s venue in both Jeudy and Ruggs. Ruggs has top-10 to even top-five value and looks show draft analyst why he is important.

During the Tide’s junior Pro Day, Ruggs clocked a blazing time of 4.24 seconds in the 40-yard dash and was disappointed in himself.

He told reporters that he slipped and if not for that, his time would have been faster. This kind of focus may guide him to beating John Ross’ (former Washington receiver) time of 4.22 seconds in the 2017 NFL Combine.

He is one score and ranking ahead of Jeudy at Alabama and with Tua Tagovailoa’s elite passing ability, Ruggs will have a shot to catch former Tide receiver Amari Cooper (31 TD’s) for No. 1 all-time.

Should Bryant-Denny Stadium be able to sell Alcohol?
Ishmael Ibraheem reacts to Alabama offer
To Top
%d bloggers like this: