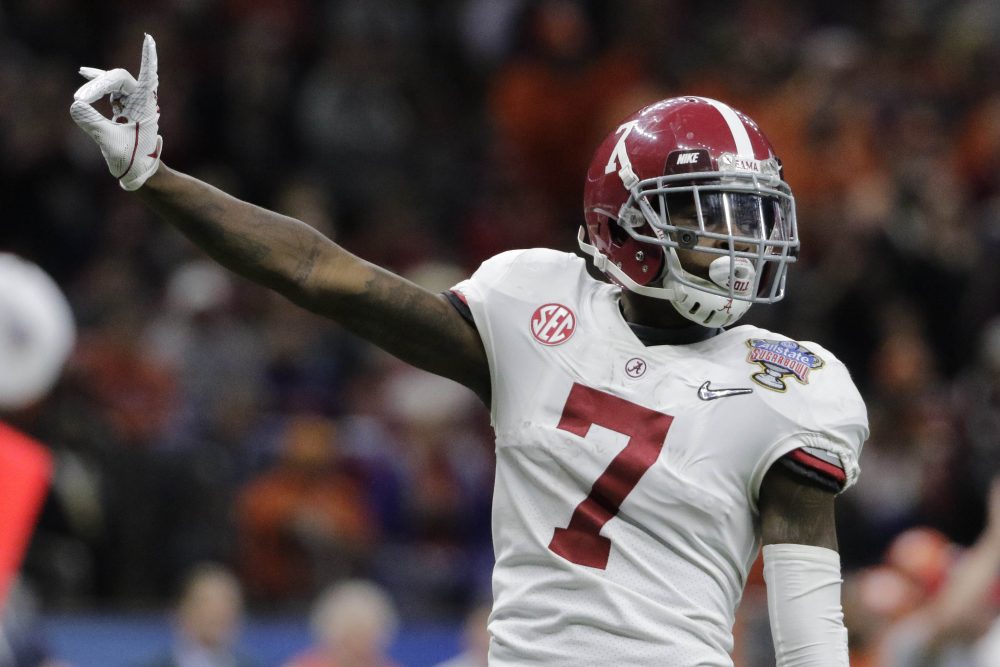 The next defender is Trevon Diggs.

What immediately sticks out about Trevon Diggs is his size at the cornerback position. Typically corners are seen to be 6 feet and below with the possibility of struggling guarding bigger receivers one on one. But that isn’t a problem for the 6-2 Diggs.

With his unusual size for the position, Diggs is able to guard a multitude of pass catchers an offense might throw at him. Whether it is your typical wide receiver or a tight end split out wide, his size and strength give you confidence that he will be able to hold his own on the outside.

Another thing to keep in mind is the way the NFL is trending toward bigger receivers. Jalen Ramsay, Richard Sherman, Stephon Gilmore and Byron Jones are some of the best corners in the entire league and all are above six feet.

One key part to remember about Diggs’ journey through the process is where he started. When he originally came to Alabama Diggs was listed as a wide receiver. But due to the need at defensive back, he was converted to corner.

With all the attitudes in today’s game, it could have been very easy for him to say no I’m a receiver I’m going to go somewhere else to play. Instead, he stuck to the process and emerged as a starter in the secondary.

A luxury of having Diggs at corner is his open-field tackling. Whether he is coming up to fill in the run game or a receiver catches a pass, Diggs is always right there to wrap him up. A lot of the time corners may not be extremely physical or have the size to step up and consistently bring players to the ground. Fortunately for Diggs, neither of those are an issue for him.

Although Diggs has all of the intangibles you are looking for in a cornerback, he is, in fact, coming off of a broken foot which cut his season short last year. Leg injuries are always concerning in football and definitely with corners.

Your feet are players most important tool when it comes to playing defensive back. They help with change in direction, leaping and running down opponents. A nagging injury makes all of these tasks much harder and also hurt your team as a result.

Despite having a solid start to the season in 2018 what may also be a bit of a concern is his overall experience. Yes, he is going to be a senior this upcoming season but 2019 will truly be his first full season as a starter at corner.

Over the last 12 years, Saban and the crimson tide have played in some of the biggest and most pressure games in the history of the sport. That being said you would like to rely on players who have had a lot of experience in those moments in the past. In prior seasons experience in big games has been the difference between Alabama and most other teams.

For 2019 Diggs is expected to put together a fully healthy season and to help Alabama’s secondary get back to their old ways after a rough national championship performance. It will also be a chance for Diggs to display himself to NFL front offices as he is seen as a top defensive back in the upcoming draft.

If Diggs is able to keep the injury bug away for the entirety of the season then he will have no problem putting together a solid year. Even though his lack of experience may be troubling there is no better coach to help you get ready for big games than Nick Saban. Diggs’ great size and versatility will also be a big plus for an Alabama secondary that is all of a sudden among the deepest units on the entire team and maybe even the whole SEC.