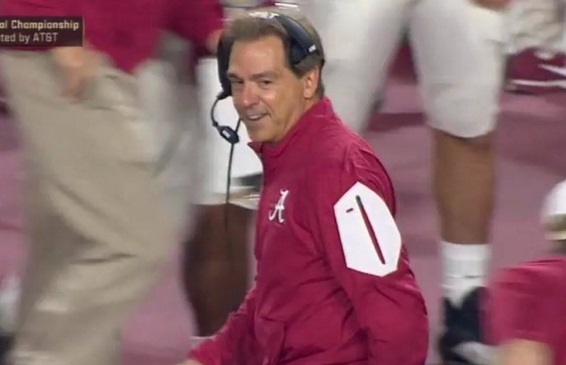 If you think you know Alabama’s football team, you’re a fool. You have no idea what the offense or defense is capable of. See why that’s the truth.

If you think you know this Alabama football team, you are a fool. This season Saban has been like the wizard of OZ, all you see is what he wants you to see, the truth is hidden behind the curtain.

It hit me today when I was re-watching an Alabama game. The plays on offense are oh so vanilla. The plays on defense are like watching an A Day game. Basic defense, basic offense, no real wrinkles, no super disguised blitz packages and just almost boring play calls on both sides of the ball.

To be honest, it just proves Saban’s genius. With the easy schedule, why show anything your opponent can see that you may want to use at a better time against a top team. Why waste your best plays, your best disguises and more on teams that are awful?

It’s the reason why we in the press can only stay for the first 15 minutes of practice before being shown the exit. We know they’re practicing more than they’re showing on game day against these boring opponents they’ve played so far. We just don’t know what they’re practicing.

I used to box and a great analogy would be going to see a future opponent fight. He wins but he doesn’t dazzle you. He’s a righty with a weak right hand and doesn’t appear that tough, but he wins over worse than you opponents. So when it’s your turn to get in the ring, you discover he’s faked being right handed and lands left hay makers on you weren’t expecting. Your whole game plan is shot and you never fight a good lefty so you’re not prepared for fight you’re in.

I doubt that Saban will open the playbook against Texas A&M, I don’t think he’ll need to. We may not see much of what he’s hidden so far this season unless he is in a close game with LSU.

However, if he doesn’t need to show anything to beat LSU, then it may be Auburn or Georgia who gets to be surprised.

Saban doesn’t open the game against anyone in the first quarter. He’ll play basic offense and defense and check the temperature of the opponent. If he sees he can just “out Jimmy and John” them with raw talent, then the play book stays closed and he’ll win that way. No team can cover all four of Alabama’s great receivers and no team can seems to be able to cover any of them one on one for very long with Tua throwing darts all day in the bull’s eye.

You haven’t seen Saban run a tackle eligible play, a halfback pass or anything like that. You haven’t seen a jailhouse blitz so far this season, a defensive line that over stacked one side of the line or trick defensive plays. I don’t think they’ve even run one reverse this season.

Not only that, but by season’s end when every game counts even more, then Alabama will have certain players back, others back to full strength and youngsters who just aren’t youngsters anymore.

Saban has a lot tricks up his sleeve, you can count on it. When you’ll see them is anybody’s guess. But if you think you know this team’s full capabilities, you’re only fooling yourself.