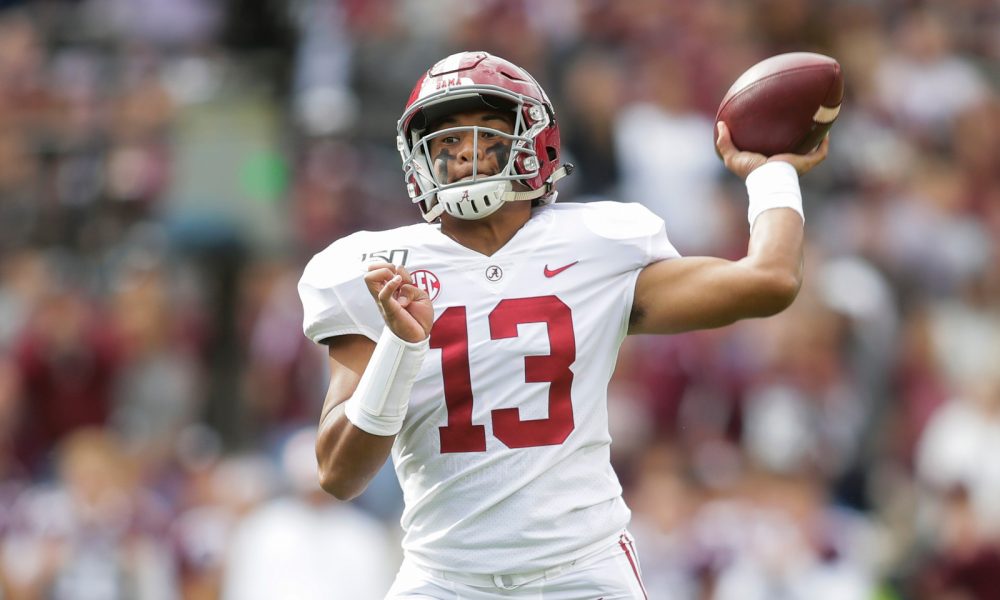 Kellen Mond did all he could do, but he and Jimbo Fisher are not on the same level with Tua Tagovailoa and Nick Saban yet.

Alabama exited Kyle Field with a 47-28 win on Saturday, as Tagovailoa found four different receivers for touchdowns and totaled 293 passing yards on 21 of 34 passes completed.

Despite tossing his first interception of the season, the junior quarterback stands alone in school history for career touchdown passes (78).

He started the matchup with Texas A&M on a 31-yard connection to Jaylen Waddle, and would find DeVonta Smith and Henry Ruggs III on passes for 47 and 33 yards respectively.

Najee Harris was credited with four score on a 16-yard reception.

In reflecting back on Waddle, the native Texan had a beautiful homecoming.

As for its rushing attack, the Crimson Tide is continuing to find success.

Coach Saban decided to start Landon Dickerson (center) and Deonte Brown (right guard) and despite an injury to Chris Owens, the move paid off.

The junior running back from California accounted for his second 100-yard performance (114 yards, 20 carries) of the year on 5.7 yards per rush. His teammate, Brian Robinson, totaled 51 yards on 10 carries with a touchdown.

Regardless of it allowing 28 points, the Tide’s pass rush was in full effect.

The duo of Anfernee Jennings and Terrell Lewis guided the team to five sacks, seven tackles for loss, 10 pass breakups and four quarterback hurries. Lewis, a junior, was a force throughout the contest with three tackles – including two for loss, two sacks and two quarterback pressures.

Jennings, a senior, shared the lead in total tackles (eight) and had one sack, two tackles for loss and one pass breakup

Shane Lee, a freshman, also chimed in with eight stops and shared both a tackle for loss and a sack.

Shyheim Carter had one of his better performances this season, finishing with seven tackles, two breakups and one forced fumble from his nickel spot.

With the exception of two big runs from Mond, the Tide kept him contained in the pocket for much of the contest, while its defensive secondary did not allow a 100-yard receiver.

Alabama improves to 6-0 on the year and though it will continue making strides, this weekend provided a lot of positives on the offensive line and defensive front.