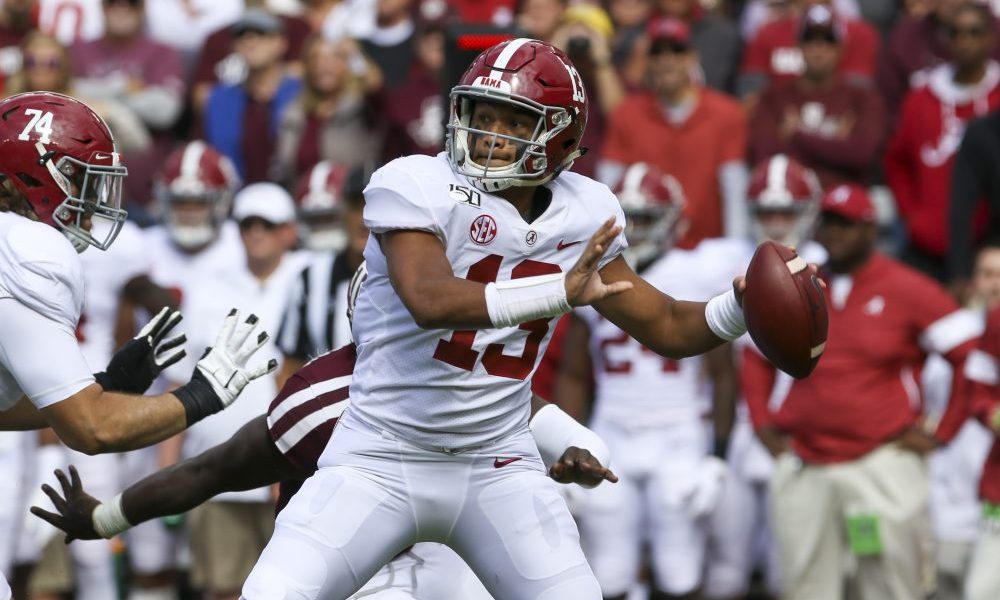 Despite dominating the time of possession, Alabama heads into the half with a 24-13 lead on Texas A&M. The Aggies came out with a ball-control mentality at Kellen Mond and the offense went right down the field on its opening possession with a methodical 15 play drive which ended in a touchdown. Most of college football has struggled to figure out how to contain Alabama’s offense and Jimbo Fisher’s plan was obviously to just try and limit their possessions.

A good idea, but didn’t quite translate to stops for the Aggies as Tua Tagovailoa and the offense fired right back with a sub-five-minute drive which ended with a 31-yard touchdown pass to Jaylen Waddle.  Tagovailoa further cemented himself in Alabama history by passing AJ McCarron for the most passing touchdowns in school history.

Tagovailoa now has the most total touchdowns and single-game passing touchdowns in Alabama history.  The Heisman Trophy favorite heads into the half completing 13/19 passes for 161 yards and 3 touchdowns.

DeVonta Smith would also connect with Tagovailoa on a 47-yard score giving him six touchdowns in the last two games the Crimson Tide has played. Smith finished the half with 5 catches for 82 yards and one touchdown.

Sophomore wide receiver Jaylen Waddle continued to make an impact after getting his first score of the year with a spectacular punt return which led to a score.

Landon Dickerson who is making just his second start at center has transitioned in nicely along with Deonte Brown making his return to the starting lineup. The unit as a whole has done a nice job of keeping the pocket clean for their quarterback. Although sparingly used, Najee Harris made some noise on the ground and in the passing game as he went into the half with 40 total yards of offense.

On the defensive side of the ball, the unit has faced a bit of criticism to start the year and got off to another slow start. A&M was able to move the ball on them getting physical yards and found wide-open receivers down the field. But as the game went on the unit really settled in. Especially with the improvements with the pass rush.

Terrell Lewis, Shane Lee, Christian Baramore and Justin Eboigbe were all able to get after Mond, each picking up a sack as well as consistently getting pressure. Defensive back Shyheim Carter also forced a fumble which set up another scoring opportunity.

Unfortunately, the fumble led to Tagovailoa’s throwing his first interception of the season after throwing 185 passes without one.