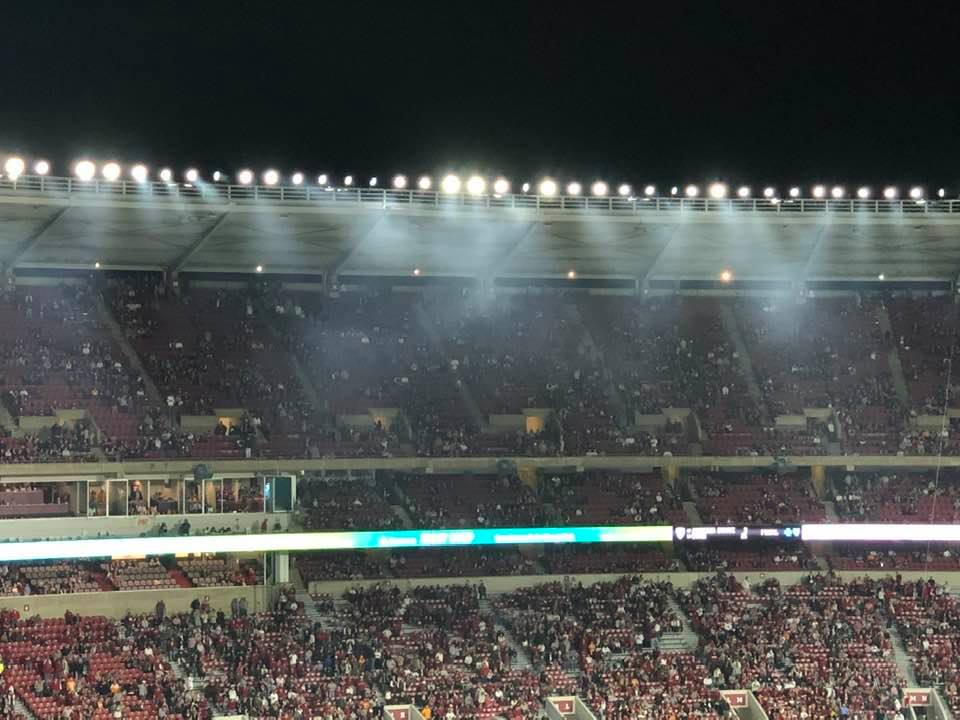 No matter the score, no matter the streak, the third Saturday in October is always a war and Saturday night following the game, it looked like one. See it all.

It wasn’t the kind of game that Saban wanted to see, players injured, key mistakes made and more, but there was plenty of highlights for Alabama fans to cheer for. Those things ranged from the dazzling new light show the stadium officially unveiled for the first time, to game time highlights and finally a smoke filled stadium as more people lit up “victory cigars” than this old reporter has ever seen. Smoke could be seen blowing around the stadium like a war zone should look.

A great Bama fan, Ben Thrasher made this recording of the new light show. Take a look if you missed it courtesy of Ben.

But all the highlights were not good ones as Tua was escorted off the field in the second quarter and later sent to the hospital. In his post game press conference Saban said it could be a “twisted ankle” but others allude it to be a high ankle sprain. He will have an MRI done on it Sunday Morning, but it’s expected that Tua will not need surgery, (according to Saban’s post game comments).

Being on the safe side, Tua will have two weeks to recover, missing the Arkansas game and then have a bye week to recover by the LSU game. Tua has told his teammates that he’ll be there for LSU.

But with Tua gone from the game, Mac Jones got to knock some dust off and get plenty of playing time. He made no mistakes and played a safe, limited play calling game. There is no reason to think that Jones can’t handle Arkansas.

But the big thing was the running game stepped up. Harris and Robinson did well when it mattered and the defense really stepped up. In fact, on a 100 yard scoop and scat to the end zone by Trevon Diggs, If you look at this picture, instead of watching Diggs scat down the field, Saban was scouring the former line of scrimmage looking for flags and the referee’s reaction. I thought showed how Saban can’t enjoy the moment as he’s always in full coaching mode.

Saban looking back to make sure there were no penalties and no problems. (Photo-Touchdown Alabama Magazine)

That play effectively ended the game and when it was over, just like a real battlefield, smoke filled the area and one side celebrated victory.