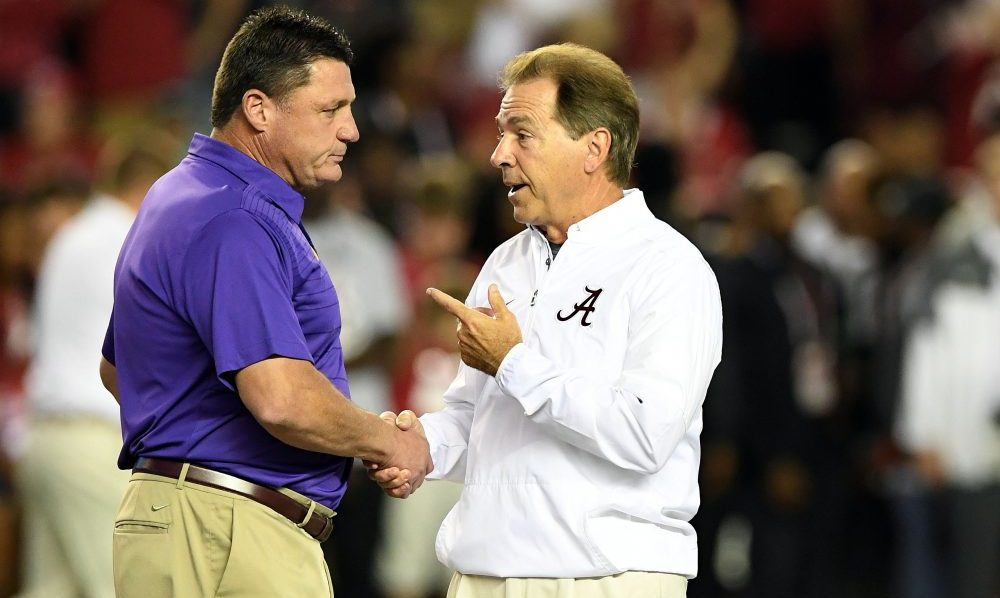 With a game that has incapsulated the country for the past two weeks in the build-up and analysis of both sides, all of the noise has caught the attention of one very recognizable person. U.S. President Donald Trump.

On Tuesday, it was reported that the 45th president would be attending the game between Alabama and LSU at Bryant-Denny Stadium. Although Trump has been quite the figure of controversy, head coach Nick Saban seemed to be letting politics take a back seat with his attendance.

“Well, it’s an honor, I think, that the President of the United States would be interested enough to come to the game,” Saban said during his Wednesday teleconference. “I’m sure we’ll do everything we can to welcome him.”

This is not the first time Saban has had direct contact with presidents. Not only has he met them at the White House on multiple occasions to celebrate National Championships, but he’s also been known to let them borrow couches for naps.

“Bill Clinton came to Michigan State to speak at the graduation commencement ceremony, and they actually headquartered in our (football) facility building, so I had an opportunity to meet and talk to him,” Saban said during his Monday press conference.

“(At one point) the Secret Service guys came and got my couch and asked if they could take it to his office so he could take a nap and I said, ‘Certainly.’ ”

Even LSU head coach Ed Orgeron was very positive towards having President Trump come to their game.

“I think it’s good, man. If the President wants to come to a big game like this, it’s good,” Orgeron said during his Wednesday teleconference. “I just hope he sits right there in the middle and cheers for both sides.”

He even showed hopes of him cheering on his Tigers.

“If he wants to cheer for LSU, I’m going to welcome his cheers, but obviously, I don’t think the President should be cheering for either team. I think he should be right down the middle.”

Saturday’s game will mark the first time a sitting president will be attending an Alabama football game in its home state. But it will be the second time President Trump will be watching the Crimson Tide play for he was in attendance at the 2018 College Football Playoff National Championship game. Unfortunately, Trump left at halftime and did not get to witness Tua Tagovailoa lead a historic comeback against Georgia.

Alabama kicks off against LSU on Saturday, Nov. 9 and due to the increased security with the president’s attendance fans are encouraged to arrive early as the gates will open to the public at 11:30 a.m.

UA has five players that must own the LSU matchup for NFL Draft status
To Top
%d bloggers like this: