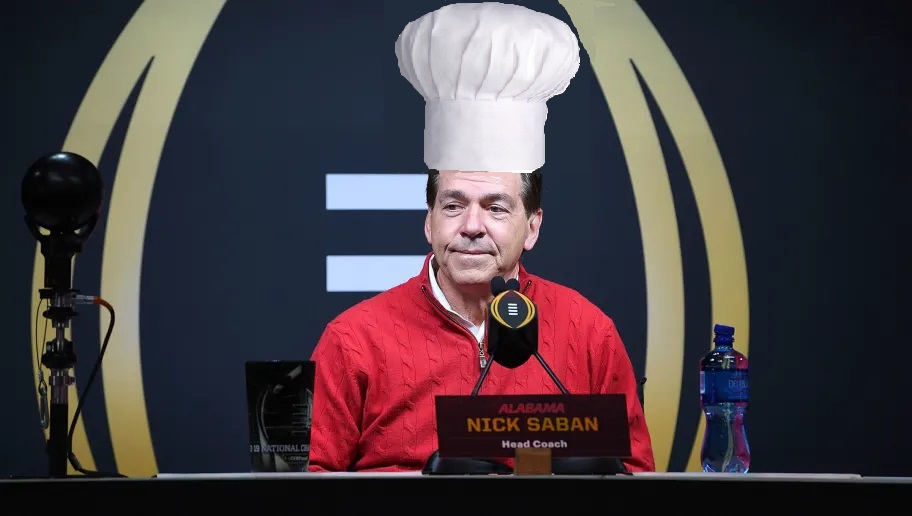 Alabama somehow managed to get in the playoffs and win it all after suffering one loss during the season and here’s the recipe it needs to follow to do it again.

Somehow Nick Saban has gotten Alabama into the playoffs and won it all four out of five times with a loss before the big game. Each year the recipe varies. Sometimes it’s taken chaos on other teams and sometimes an outstandingly lucky break, like the Arkansas backward lateral  against Miss. State to get them in the SEC Championship. Each year it’s taken different things to get Alabama in the playoffs.

So what will Chef Saban cook up this year to get his team in the playoffs? Well we think we have the winning recipe and see if you agree.

The first thing is to remind the committee that the voters of the AP poll and the Coaches Poll can’t be all wrong and that Alabama is truly, the fourth best team in the nation. But as the weeks go by, things can happen that may influence these other polls and he can’t count on those polls because they really have no influence to the committee. So Saban won’t rely on just letting things happen, he’ll come up with a recipe of his own to insure he makes it in the playoffs and this is the recipe he just may follow.

One part resting Tua during the Mississippi State game and maybe even the Western Carolina game. Let’s face facts, Tua is once again going to be a bridesmaid at the Heisman ceremonies once again this year and everyone with a brain knows that Mac Jones can put up gaudy numbers on poor Miss. State and Western Carolina. There’s no need to play Tua in games where it won’t win him a Heisman. That boat has sailed, Burrows won it on Saturday night and everyone should just accept that.

This does two things. It reconfirms in the selection committee’s minds that Tua was not well in the LSU game and with a healthy Tua, he wouldn’t have fumbled in the red zone, thrown those picks and it would have been a different game against the number one team in the country.

Then add one part destroying Auburn at their house. Alabama has not fared so well in beating the Tigers in their own den, but they must do this for two reasons. First it will show that with a healthy Tua, the Tide truly is one of the best teams in the nation. Secondly destroying the team that defeated a one loss Oregon will diminish their eye test with the committee and place Alabama higher than Oregon.

Add one part chaos. Maybe USC defeats a one loss PAC 10 leader in the PAC 10 Championship. That would eliminate anyone from that the PAC 10 from any reasonable voter.

Maybe Oklahoma and Texas will beat Baylor and then Baylor defeat Oklahoma in the Big 12 Championship leaving everyone there with two losses.

And for the last ingredient, have LSU kill Georgia in the SEC Championship. That will re-enforce the notion that Bama’s close loss was truly against the best team in the nation.

There’s the recipe now you just have to bake in the back room of the committee and let Bama’s history, prestige and eye test simmer in the minds of the voters and voila! You’ve created the dish that gets Bama back in the playoff picture and deservedly so and Nick Saban makes Martha Stewart look like a Waffle House grill cook with this dish and this recipe.