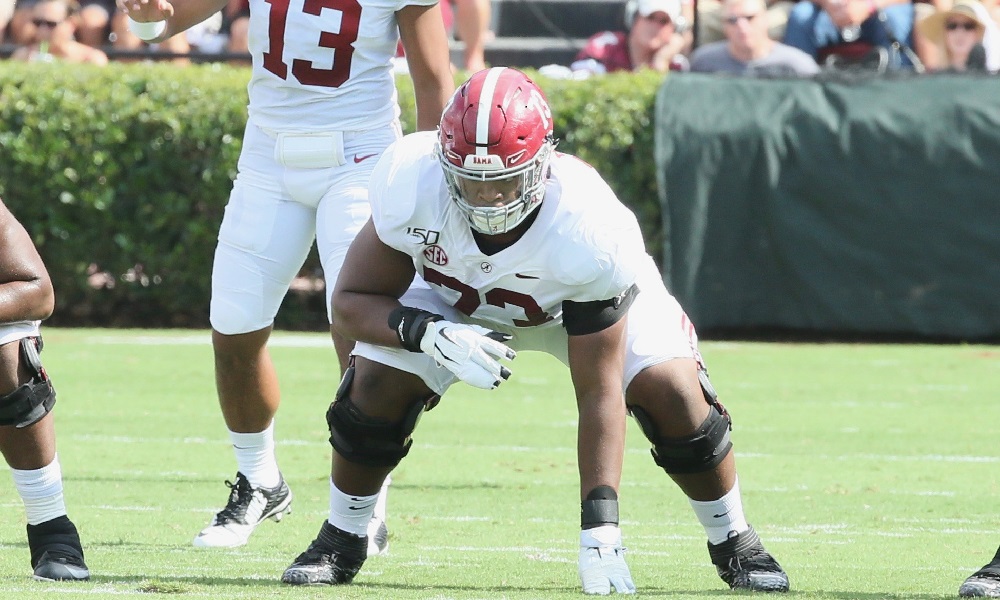 Alabama football has one draft-eligible junior that has made his plans official to turn professional.

Jedrick Wills Jr., a two-year starter at right tackle, posted via Twitter on Saturday that he will forgo his senior season. A native of Kentucky, he guided an offensive unit that allowed 12 sacks in 381 pass attempts and produced a 1,000-yard rusher in Najee Harris.

In his departure, Evan Neal will be expected to kick out to right tackle.

Neal, like Alex Leatherwood, played at guard in his first year as a starter.

The five-star from the state of Florida made the All-Freshman Team for the Southeastern Conference and did not allow a sack through 13 games in 2019. He set Harris up to collect five 100-yard rushing performances, including four versus SEC schools.

Neal guided the junior running back to 136 yards on 24 carries with two scores versus Michigan in the Citrus Bowl.

As far as the unit from left to right, Alabama could be looking at Leatherwood, Emil Ekiyor, Landon Dickerson, Deonte Brown and Neal as the set up. This would be a dominate group for any quarterback and rushing attack to play behind.

Wills had an incredible career with the Crimson Tide, as he was on a SEC Championship team (2018) and a College Football Playoff National Championship squad in 2017.

He assisted Tua Tagovailoa to be the runner-up for the Heisman Trophy in 2018, and his protection led to Jerry Jeudy, DeVonta Smith, Henry Ruggs and Jaylen Waddle all being 1,000-yard receivers for their careers.

Tide fans will wish the best for Wills, but next year’s offensive line will be nasty.