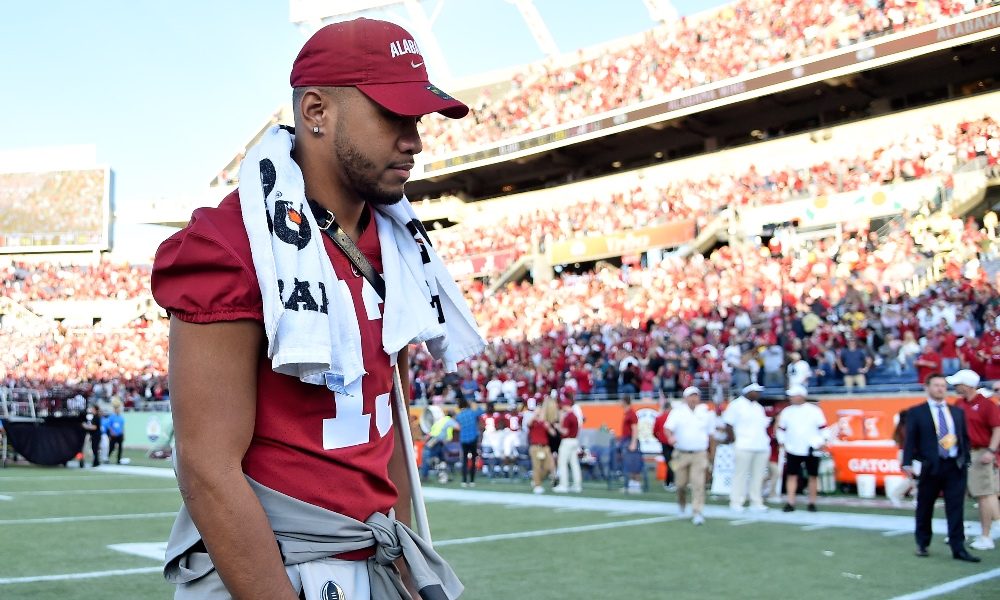 It has now been a little over a week since Tua Tagovailoa declared for the NFL Draft, a decision everybody had assumed was impending upon seasons end. In his three years at the school, the lefty had etched his name into the record books and the hearts of Alabama nation.

He is the universities all-time leader in touchdowns and helped the Crimson Tide capture a College Football Playoff National Championship and one other appearance.

But even then Tagovailoa is not pleased with how his career in Tuscaloosa came to an end. In an interview with KHON2, a news station licensed to Honolulu, HI, Tagovailoa discussed his discontent with the end of his time as a college quarterback.

“Leaving all of this behind, you know it’s hard because deep down I know that I didn’t accomplish what I wanted to in college, but that’s just the game. You make business decisions in life and sometimes it’s a lot harder than it is on the flip side. It’s a decision that I made and I’m happy with it, got to live with it, and I’m going to make the best out of it.”

The 2019-20 season was a difficult one for Tagovailoa and Alabama as there were many expectations not met throughout the season. Not only did the team suffer multiple injuries and struggle on the defensive side of the ball, but it also only had its quarterback appear in nine games and only finished seven of those games healthy.

The Hawaii native suffered two major injuries during the season. The first came against Tennesse where he suffered a sprained ankle in the second quarter of the game where he had to have a tight rope procedure done. It was the second time he went under the procedure as he suffered the same injury to the opposite ankle in 2018. Regardless, Tagovailoa was able to return just two weeks later and played against LSU when he was not 100 percent.

But that wasn’t the end of Tagovailoa’s hardships. One week after Alabama’s first loss of the season to LSU the team traveled to Starkville, MS to play Mississippi State where Tagovailoa again suffered an injury right before the half. This time it was a dislocated hip which ended his and Alabama’s chances at a  College Football Playoff.

Despite his unmet expectations and tough final season in college, Tagovailoa is at peace with his decision to enter the draft and is looking to inspire the other athletes on the island.

“It’s always been a dream to be able to go to the NFL and make a lot of money, just because I’m able to change my family’s life. So, I think that should say something really big about everyone from the west side, the south side, the east side. I mean, anything is possible for these kids,” said Tagovailoa.

“If someone like me can come from Ewa Beach where we don’t really know too much people that make it big out of there, that should give everyone over here in Hawaii hope that if I want to sing, I can do it. If I want to go and fight, it doesn’t always have to be someone from the west side, from Waianae or something. I mean, anyone, anywhere here on this island or on the other islands, if they have a dream, they got to work hard at it for sure but any of those things are possible to accomplish.”