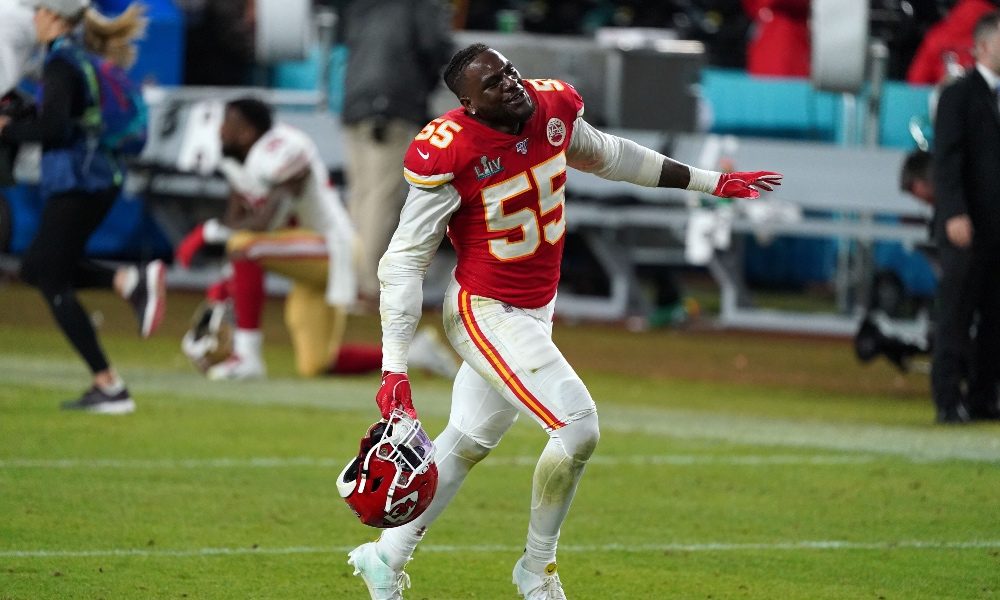 Over the last three weeks, Kansas City Chiefs defensive lineman Frank Clark made headlines across the spectrum of Alabama fans.

And not in a good way.

Before the Chiefs played the Tennessee Titans in the AFC Championship game, Clark was asked about his thoughts on containing former Alabama running back Derrick Henry who had been shredding the league’s top defenses going into that game.

“He’s not hard to hit,” Clark said. “He’s just a big guy. 240, 245, 250 (pounds); honestly, he should be running harder at his weight and at his size. I don’t see no difficulty in tackling him … He’s just easy to me up front because I don’t look at any running back like they can’t be tackled. He’s not one of the best guys at breaking to me, honestly.”

But yesterday during the team’s championship parade, Clark showed a different side of himself. Clark decided to honor one of the Chiefs all-time best players and also one of the best members to ever come through Tuscaloosa.

That player was Derrick Thomas.

Clark wore a Derrick Thomas jersey for the entirety of the parade even sending out a tweet with the caption, “For the ones who came before us.”

For the ones who came before us. pic.twitter.com/BTHsqtNZgs

Even fellow defender Terrell Suggs joined in on rocking a Derrick Thomas jersey during the team’s parade.

Thomas was one of the best pass rushers in the history of the Chiefs and on Wednesday it showed that his impact still resonates with today’s players.

Nick Saban feels sorry for people who walk into a wall while texting on their phone
PODCAST: Alabama is not hurting with missing on four-star DL in 2020 class
To Top
%d bloggers like this: