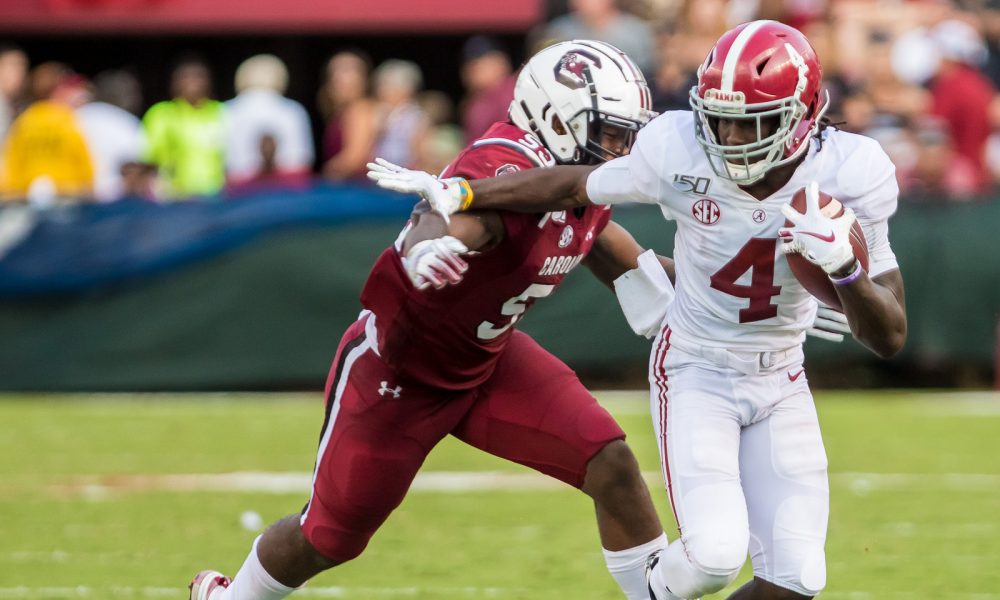 He knows that speed is not his game, and Jerry Jeudy is fine with it.

The native Floridian has not earned a potential high first-round grade off speed; he’s earned it by his route-running, secure hands and having the concepts to offset defensive backs on his routes.

After being a juke-moving machine in high school, the former five-star took those traits to Alabama and perfected them. He twice posted 1,000-plus yards in three years, including 1,163 yards with 10 touchdowns in 2019.

Jeudy was a national champion, All-American and Fred Biletnikoff Award winner with the Crimson Tide. His mark of 26 career scores is second all-time to Amari Cooper (31), in terms of wide receivers for Alabama.

He secured his value as a first-rounder at the NFL Scouting Combine, yet one critic questioned Jeudy’s lateral quickness.

Nick Farabough, a draft analyst for Pro Football Network, tweeted a video of Jeudy’s lateral quickness versus South Carolina but said his shuttle time was ‘awful.’

Meet Jerry Jeudy, the same guy who shows off great lateral quickness of film but ran a 4.53 short shuttle (that’s awful, in the 3 percentile for WRs).

Shoot the agility times from this combine to the moon

He was clocked at 4.53 seconds in the 20-yard shuttle and 4.46 seconds in the 40-yard dash; however, Jeudy is not a speedster. The 6-foot-1, 193-pounder reminded people of the only thing that matters to him is what he does on the field.

On the field, no one was able to stop him.

I never been a guy with crazy numbers when it comes to 3 cone, short shuttle, vert, etc. But on that field when it really matters can’t nobody see me!!!

Jeudy collected ten 100-yard performances in his career. His skill set is so dynamic on film that Pro Football Hall of Famer and fellow Floridian, Deion Sanders paid Jeudy the ultimate compliment.

Of course, Farabough returned to social media with stating how he never meant to criticize the elite receiver.

Per Farabough, Jeudy is a Top-10 player on his board for the upcoming draft.

﻿
PODCAST: Alabama’s Shane Lee to be a force under David Ballou and Matt Rhea
Quinnen Williams arrested at LaGuardia Airport, attempting to board a plane with a gun
To Top
%d bloggers like this: