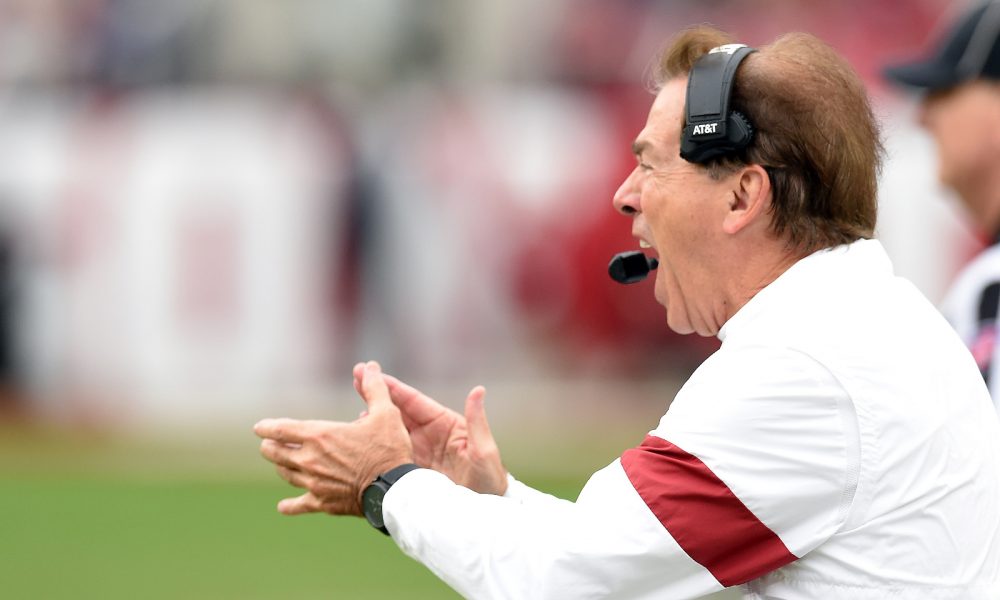 Although it is tough to tell right now, ESPN sees at least one loss on Alabama’s schedule.

For Nick Saban and the Crimson Tide, the goal is to return to the College Football Playoff this season after missing it last year for the first time since 2014. A combination of injuries and lack of communication on defense led to its issues; however, the Tide is ready to move forward.

RELATED: Alabama’s Christian Barmore to turn in an All-American year this season

Despite losing some talent and leadership to the National Football League, Saban tends to constantly reload and have the program in a spot to contend for a national championship.

Alabama fans seem to be happy about the schedule, seeing as how it has some compelling matchups in the fall.

While it will be interesting to see if the Tide can run the table without a blemish, yours truly of Touchdown Alabama Magazine projects its five toughest matchups.

As he has done since 2008, Saban loves to challenge his team early with playing a traditional power and it faces Southern California to start the 2020 campaign.

Regardless of it not being the same USC teams under Pete Carroll, Clay Helton returns a roster filled with talent for the fall.

Kedon Slovis guided the Trojans to an 8-5 record last year.

He tossed for 3,502 passing yards with 30 touchdowns to nine interceptions as a freshman at quarterback. Aside from not boasting a dominant rushing attack, USC has quality weapons on the outside with Amon-Ra St. Brown, Tyler Vaughns and Drake London.

It had trouble dealing with physical receivers in 2019, so Alabama’s secondary must be prepared to lock guys down.

Defensively, the Trojans return Drake Jackson as its top specialist for sacks (5.5) and tackles for loss (11.5). Olaijah Griffin is back and he had nine pass breakups (team-high) at defensive back, while Isaiah Pola-Moa carried the group for interceptions (four). It suffered a 52-6 loss to Alabama back in 2016, but USC expects to settle the score this time at AT&T Stadium.

He was met with some skepticism, but supporters of Tennessee football have bought in on Jeremy Pruitt as head coach of the Volunteers.

After a 2-4 start to the 2019 season, the Vols pushed the Tide to a very competitive matchup at Bryant-Denny Stadium.

Even in a 35-13 loss, Tennessee fans left the venue feeling good about the direction of its program under Pruitt.

The Volunteers would win its next six games, to end its season at 8-5.

Pruitt returns both Jarrett Guarantano and Brian Maurer at quarterback, but he signed a high four-star in Harrison Bailey for the 2020 class.

Tennessee, like USC, is going with a committee of running backs yet it must develop receiving targets quickly.

Butch Jones, like Pruitt, recruited well at Tennessee but Pruitt is developing players.

Alabama will travel to Neyland Stadium for what could be a compelling game.

The reigning national champions have a lot to replace.

In his fourth year as head coach at LSU, Ed Orgeron took his team on an incredible journey and won a Southeastern Conference title and a national championship. He did it with Dave Aranda calling the defense and Joe Brady as the passing game coordinator. Orgeron lost both coaches to other jobs and graduated 14 players – including Joe Burrow, quarterback – to the NFL Draft.

Burrow gave the Tigers its first Heisman winner since Billy Cannon in 1959.

He is faced with a daunting task, but Orgeron will host Alabama at Tiger Stadium this year.

For Tide fans, the Tigers have always been the program in the SEC to provide a sense of nervousness late in the season. Saban will have a duo in the middle of his defense from Baton Rouge (La.) in Dylan Moses and Christian Harris.

Both players shall be ready for the moment.

Can Orgeron and LSU reload? This will be the question on everyone’s mind.

Following a 9-4 campaign in 2019, Auburn has experience on offense and defense.

Bo Nix had a solid freshman year, totaling 2,542 passing yards with 16 scoring passes (23 total scores) to six interceptions. With the Tigers hiring Chad Morris at offensive coordinator, Nix anticipates taking the next step in his development.

Gus Malzahn is usually the primarily play caller for Auburn, but hopefully he allows Morris to guide Nix offensively.

JaTarvious Whitlow is in the transfer portal; nevertheless, Auburn has D.J. Williams, Shaun Shivers and Anthony Schwartz (receiver) that can run up the middle or bounce plays outside.

Seth Williams, 6-foot-3 and 224 pounds, is back as one of college football’s best receivers.

He collected 830 yards and eight touchdowns on 59 catches. Eli Stove is also on the Tigers’ roster, as he brought in three scores last season.

Kevin Steele is licking his chops at defensive coordinator, seeing as how the team did not lose much to the draft. Auburn has K.J. Britt, Big Kat Bryant, Tyrone Truesdell and Zakoby McClain back along its defensive front.

The trio of Roger McCreary, Smoke Monday and Christian Tutt are in the secondary.

Malzahn defeated Saban at Jordan-Hare Stadium last year, but he has not fared well inside Bryant-Denny Stadium. He’ll try to get that monkey off his back in the fall.

The Alabama-Georgia matchup in week three on Sept. 19 could be part one of a future SEC Championship Game down the road.

Kirby Smart will be at Bryant-Denny for the first time since leaving the Tide after the 2015 season.

He has lost to Saban twice at Mercedes-Benz Stadium, including a 26-23 defeat in overtime for the 2018 College Football Playoff title matchup.

With Jake Fromm in the pros, the hope for the Bulldogs is that Jamie Newman (grad transfer from Wake Forest) can lead the team to a national title. He guided the Demon Deacons to eight wins in 2019, but Newman is with a new team and a new conference. Georgia no longer had D’Andre Swift, but Zamir White and James Cook are back at running back. It has three quality receivers – George Pickens, Demetris Robertson and Dominick Blaylock – and leadership returning on defense.

The idea of Smart and Scott Cochran being on the other side of a Tide-Bulldogs contest is every piece of motivation needed for Alabama’s players. This will have a “Game of the Year” type of feel early in the season and if the Tide handles Georgia, it goes a long way toward a national title.