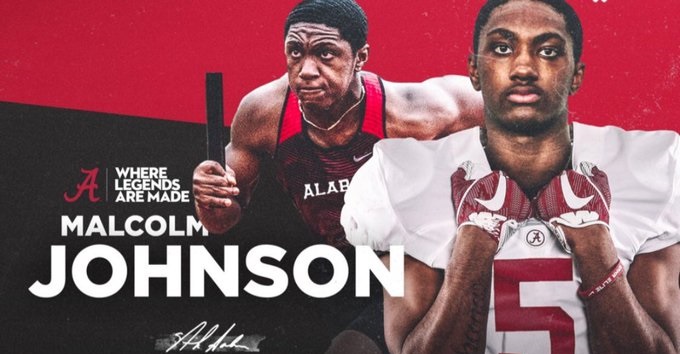 Johnson has the Tide in his top 5 along with fellow SEC programs: LSU, Florida, Auburn and Georgia. This top 5 was released Saturday by Johnson via Twitter. The Crimson Tide has been in the mix for Johnson for several months now as they were scheduled to host him for a visit in March before the recruiting dead period was put into place.

The 4-Star recruit told Touchdown Alabama, he really liked the way the Tide uses their wide receivers in an interview in March.

“Alabama is just a powerhouse,” Johnson said. “I think if anyone gets an offer from them, it is definitely something to consider without even knowing everything about the program. Their offense is explosive and they use speed to their advantage. They love speed.”

The dual-sport prospect also plans to run track at the next level and is looking for a program where he can compete day in and day out.

“I want to run track and play football,” Johnson said. “I am looking for a program, that can develop me and a program, where players around me have the same mentality as me. That is just like an iron sharpen iron type of deal, where the practice is tough and the game is easy.”

Alabama currently has three wide receivers committed with pledges from Agiye Hall, Jacorey Brooks and Christian Leary as they plan to add another wideout to this group. Johnson could be the wide receiver to complete a loaded wide receiver group for Nick Saban and company.