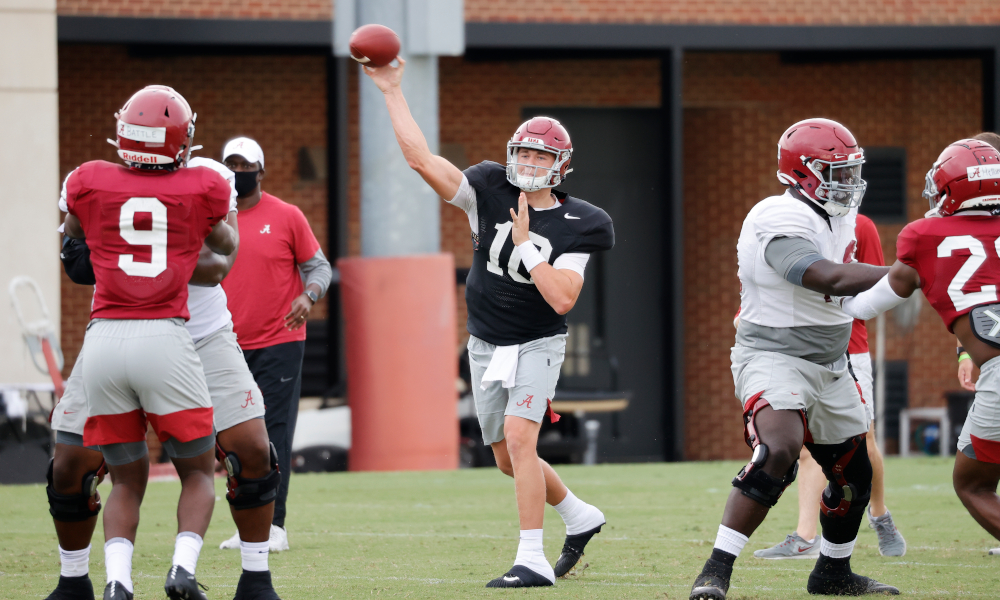 Nick Saban has proven he can win national championships at Alabama with any type of quarterback.

Fans of the Crimson Tide enjoyed the “game managers” in Greg McElroy and AJ McCarron, the deep ball of Jacob Coker, and the heroics of Tua Tagovailoa off the bench. He came close to pulling out a national title ring with a converted running back, wide receiver and defensive back in Blake Sims under center and if not for an impressive final drive by Deshaun Watson of Clemson, Saban would have won a national title with a true freshman starter in Jalen Hurts.

Even through Bryce Young (true freshman) has been impressive in fall practice, Mac Jones has been preparing for this moment for a long time.

Does he carry an immediate excitement like Young? No, but he received valuable experience running the offense last year. Upon an ankle injury and a dislocated hip sidelining Tua Tagovailoa, people thought Alabama would take several steps back in explosive plays.

Despite some shock and awe early on, Jones would settle in and performed well against Arkansas, Auburn and Michigan (Citrus Bowl).

Through those matchups, he tossed for 897 yards with 10 touchdowns to two interceptions.

This offseason, Jones worked on more than his craft. He grew an inch and added nine pounds to his body, going from 205 to 214.

With his 6-foot-3 frame, the native Floridian looks like a prototypical quarterback in the National Football League. Regardless of the doubters on social media, his teammates believe he will deliver the program to a national title.

Jaylen Waddle, a junior at wide receiver, spoke to local reporters on Saturday via Zoom. He said the redshirt junior quarterback is ‘really leading the team.’

“Mac Jones has taken his role personally,” Waddle said. “He came in late last year, so it was more of a process of him getting better and confident with the offense. Now, he’s looking really, really good.”

The connection between Jones and Waddle started in 2018, when the signal caller found the native Texan for a 5-yard reception that he turned into 94-yard race to pay dirt versus Louisiana-Lafayette at Bryant-Denny Stadium.

“Through minicamp and this camp we have now, we have been getting a lot of reps,” Waddle said on the connection growing between he and Jones. “A lot more reps than usual. So, I think the chemistry is continuing to get better over time.”

When it comes to Devonta Smith, two of his 14 touchdown catches came from Jones as well.

He has a connection with Slade Bolden, Xavier Williams and Miller Forristall (tight end) too.

Steve Sarkisian, Alabama’s offensive coordinator, talked about the progression Jones made from being thrown into action versus Tennessee to how well he looked in the Citrus Bowl.

After some early struggles, Sarkisian said Jones played ‘pretty well’ versus Arkansas, he showed a lot of ‘moxie, toughness and confidence’ versus Auburn, and he did some ‘great things’ against the Wolverines.

He ended the year with 14 touchdowns to three interceptions, and he eyes an opportunity to win a championship.