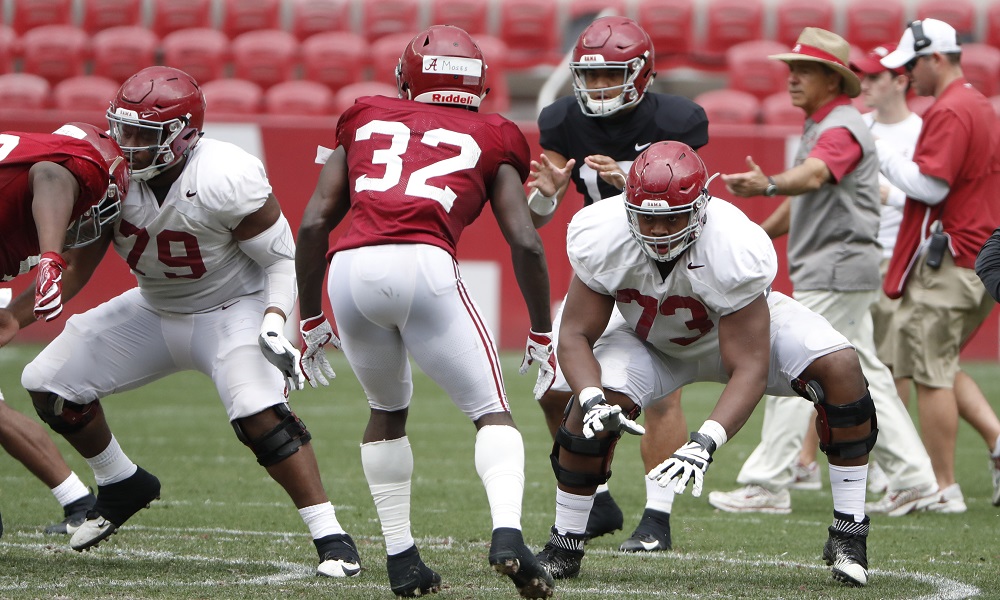 Alabama football has four spots confirmed on its offensive line.

With Landon Dickerson and Deonte Brown adding weight this summer, Brown goes from right guard to left guard and Dickerson moves from center to right guard. Alex Leatherwood, a senior, remains at left tackle and on Wednesday, he confirmed Evan Neal as the right tackle.

An alumnus of IMG Academy in Bradenton, Fla., Neal came to the Crimson Tide as a five-star in its 2019 signing class. The 6-foot-7, 360-pounder was an offensive tackle throughout high school, but he started all 13 games at left guard a season ago. In taking the path Leatherwood did as a sophomore in 2018, Neal earned Freshman All-American honors from USA TODAY, ESPN and FootHball Writers Association of America.

He made the Freshman All-SEC Team and helped Alabama post the nation’s No. 2 scoring offense (47.2 ppg), No. 3 passing offense (342.2 ypg) and No. 6 total offense (510.8 ypg). When it comes to pass protection, Neal was on an offensive unit that surrendered just 12 sacks in 406 pass attempts. He also cleared the way for Najee Harris to have his first career 1,000-yard rushing campaign (1,224), while assisting he and Brian Robinson Jr. to have 18 rushing touchdowns.

RELATED: Will Alabama players skip practice to stand alongside others fighting racial injustice within the sports community?

As he returns to his natural position, Leatherwood said it’s great to see Neal back at tackle.

“Any obstacle that is thrown at him, he is going to overcome it. When he was playing guard, I did give him tips on how to transition. That made his transition go a lot smoother, but him going back to tackle has been great too. He was already a natural tackle, so it was not really that much to it. He’s doing way better than what I would have expected in fall camp.”

Neal’s transition gives the Tide two bookend tackles. Nick Saban has yet to have to 6-foot-6 or taller starting tackles in his tenure at Alabama.

This is music to the ears of Steve Sarkisian at offensive coordinator, the rushing attack and quarterback play.  The final question to be answered is at center. A three-man race of Chris Owens, Emil Ekiyor Jr. and Darrian Dalcourt is happening.

Whoever can consistently perform the role well shall win the job. All in all, Saban has a front line that is more than capable of winning the Joe Moore Award.