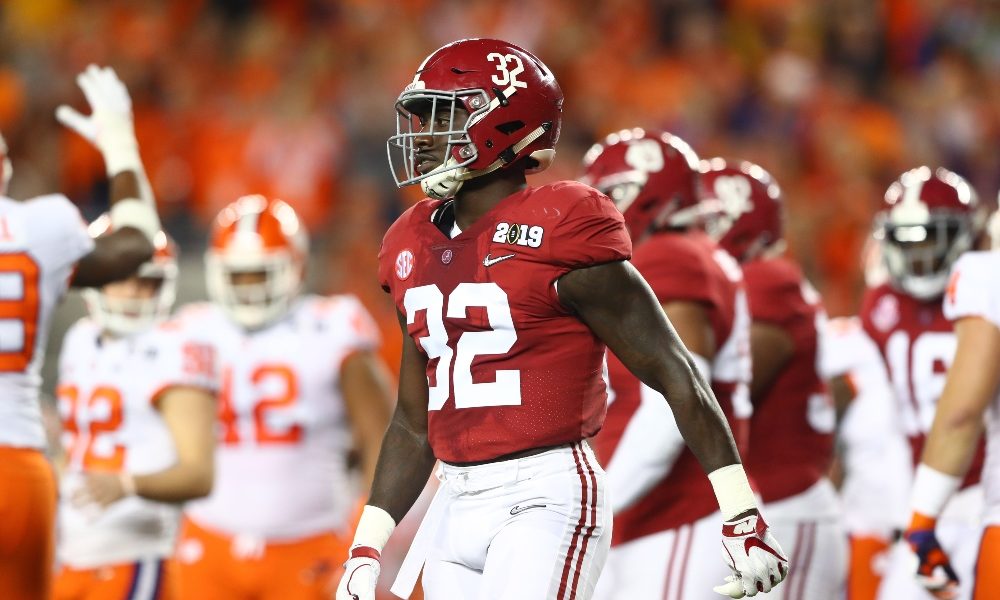 As we hit the summer portion of the offseason, Touchdown Alabama Magazine will release a series a series of player spotlight pieces on starters and marquee contributors for the 2020 football season. In these articles, we will dive into the strengths and weaknesses of each player, provide expectations for 2020, give NFL Draft projections for those who are eligible, and conclude with how each one can impact the team.

The first defender is Dylan Moses.

Summary: Other than Tua Tagovailoa, there was not another player on Alabama’s roster who was missed more during the season that Dylan Moses. For the first time in quite a long time, Alabama’s weakness on defense was at the middle linebacker spot where it has been so solid for over a decade.

Much of that can be attributed to the loss of Moses who missed the entire season with a foot injury. Fortunately for the Crimson Tide, Moses decided to not enter the NFL Draft and return for his senior year in Tuscaloosa. And Alabama will be all the better for it, as it finally has its leader in the middle.

Last season when I put together Moses’ player profile one of the weaknesses I put down for him was his leadership. Well if last year showed us anything it’s that with not Moses on the field the defense was in peril.

Moses himself has also said that he wants to have a more hands-on approach with this year’s defense, helping the younger players get in position and communicate as a whole. Defensive coordinator Pete Golding also spoke highly of Moses’ character and shared a story about him the day before he went down with his injury.

Moses got right in the face of a younger player who was going through the motions on defense and emphatically told him to “that’s not how we do things here.”

If those stories don’t encapsulate what a leader is, then they’ll have to rewrite the dictionary. Or at the very least update Urban Dictionary.

Either way, I’ll wear that egg on my face.

But what Alabama gets back is an extremely versatile defender who can drop into coverage, fit for the run and rush the quarterback. In short, he’s the prototypical NFL linebacker who can flat out do it all.

Summary: After suffering an injury that sidelines you for an entire season, it’s fair to be concerned about your durability especially with an injury to your ankle at linebacker. Now, Moses has said he is completely recovered and is given the green light, but there will no doubt still be questions.

This critique may disappear following the opening weeks of the season, but until then nobody knows if his injury will hinder him in any way.

The more by the books scratch in Moses’ armor is that he sometimes gets caught up a bit during plays with a run/pass option (RPO).

The RPO game has been integrated into nearly every single offense now within the past decade of college football. Even Alabama has utilized it with great success with Tua Tagovailoa and receivers like DeVonta Smith and Henry Ruggs.

It makes a ton of the best linebackers in college football look a little bit lost and Moses has been susceptible to getting frozen a bit when hit with one of these plays.

If his injury was to hinder him in any way it would be most prominent in these types of situations, but until there is some on the field action there is only speculation.

For those who believe Moses will be the one missing piece to an Alabama defense who didn’t live up to standards last season, you may be a bit misguided. It’s too much to put on one player especially when the Crimson Tide struggled in multiple different areas on the football field.

But having someone in the middle like Moses can surely help in some of those spots.

When healthy he’s one of the best defensive players in the entire country and can help bring along an Alabama front seven that has a ton of youth.

Despite some injury concerns, having Moses back in the heart of the defense can be looked at as nothing else but a positive. The young linebacker room as well as the entire defense will have an unquestionable leader to look up to, and Pete Golding will have his second coordinator on the field at all times.

Whether he plays at the elite level of some of the other linebackers in the country this year is still up in the air. But as of right now it sounds like Moses is ready to remind everyone who he is.