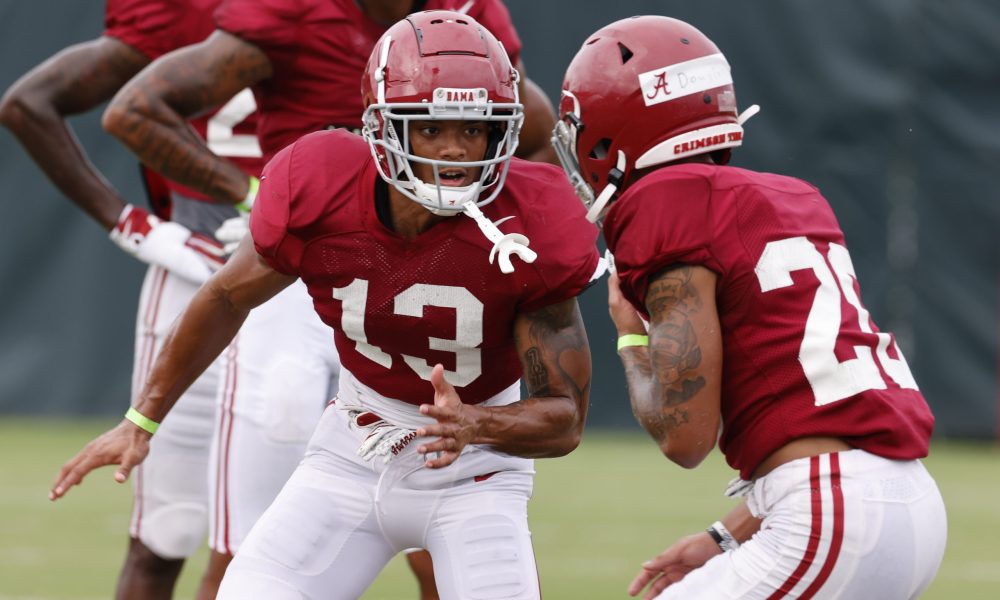 Malachi Moore will be one of the two true freshmen, who will take the field as part of Alabama’s starting defense in its first game of the season Saturday.

Moore’s journey to get to this point may seem like it was a quick rise but in actuality, it has been a four-year journey of hard work and steady progress. As a freshman at Hewitt-Trussville High School, Moore lined up at wide receiver for the most part, while playing basketball doing the off-season. This was around the time he started to train with former Alabama defensive back, Justin Woodall.

“When I first meet him, I knew he was a two-sport guy,” Woodall said. “I saw him on the court first and he was not bad. I knew he was athletic. He played wide receiver when I first got him, then we started to transition him over to defensive back when he was told he was going to be a DB. I thought that would fit him well with him playing basketball and having great ball skills. When they had him at wide receiver, I knew he was going to be a DB at the next level. I told him that before they moved him there. The moment he told me he moved to defensive back, I said let’s go to work. He is probably the hardest working kid I have ever worked with.”

Moore would make quite the name for himself as a defensive back for the Huskies as he garnered interest from some of the top football programs in the nation. In the end, It was the Crimson Tide, who were able to land a signature from Moore on National Signing Day. The former 4-Star prospect’s plan was to enroll into the University of Alabama in January but was unable to do so due to Alabama’s limited scholarship numbers.

The Hewitt-Trussville product did not see this as a moment of discouragement. To him, it was extra time to prepare for the next level.

“He put his head down and went to work,” Woodall added. “He was not mad or anything like that. He just went to work, so when he did get there, there will be no questions about his ability.”

Questions from the Alabama coaching staff about Moore look to be few as they have made the move to start the true freshman in their first game of the season. Moore becomes the first Alabama true freshman defensive back since Minkah Fitzpatrick to start the first game fo the season. This move surprised many but was no shock to Woodall as he has helped train Moore for this exact moment.

“He is smart and he understands concepts well,” Moore added. “I think the mental part of his game is what Nick Saban likes. He is a talker and he does not mind getting people in place. He is physical too. At the Star position, you have to be physical.”

Moore’s rise to become a starter for Alabama football has his family excited and over the moon to see him play. Woodall, who has become like family to Moore, shares that same level of excitement.

“It makes me so happy because he has completely changed his game,” Woodall said. “He really worked hard to loosen his hips, gained more strength and put on some more weight. To watch him from ninth grade, put his head down and work, and now he is starting as a freshman, that was like my ultimate goal. My ultimate goal for all the kids I work with is for them to be 100 times better than me. I did not start as a freshman. I had to wait two years later. I am so happy for him and excited to see him play. He has worked and earned this. There were days he called me to train.”

Moore’s journey still looks to be in its early stage as he has a lot of football in front of him. His next big step will be in Columbus, Missouri when he takes the field in the crimson and white for the first time as a starter.

WATCH: Alabama defense, William Anderson get prepared for Missouri this weekend
Former Tide QB Blake Sims is firmly behind Mac Jones as Alabama’s starter this season
To Top
%d bloggers like this: