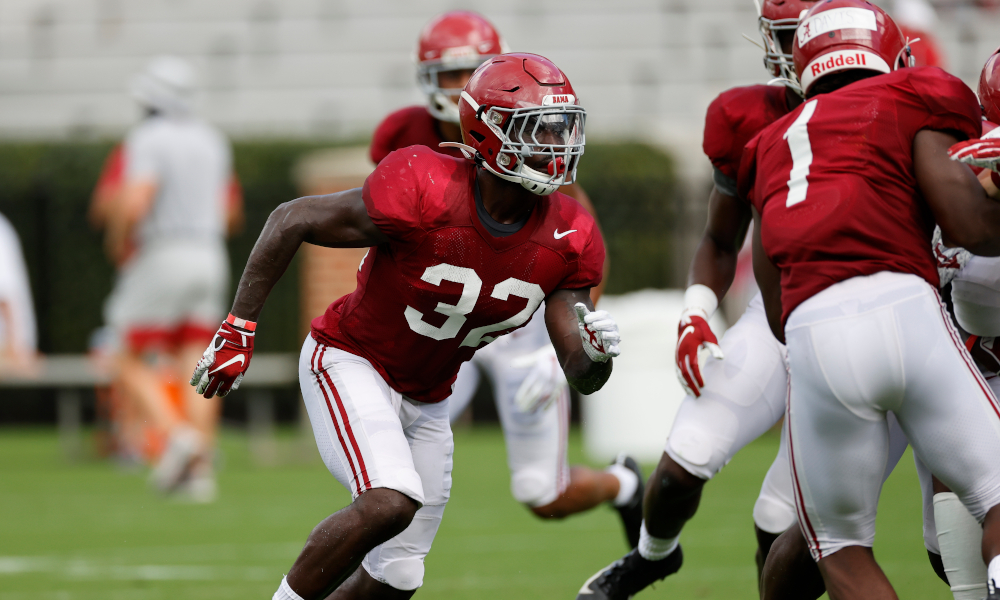 After an unusual offseason, Alabama football returns on Saturday versus Missouri.

Nick Saban has released the depth chart and this year’s team is poised to win a national championship.

For the first matchup in a 10-game, conference-only schedule, the Crimson Tide travels to face the Tigers at Farout Field inside Memorial Stadium.

Missouri has a new head coach in Eliah Drinkwitz, but he is a savvy offensive mind.

A disciple of Gus Malzahn, Drinkwitz was a quality control coach on Auburn’s 2010 BCS National Championship team. In his coaching career, he has been at Springdale (Ark.) High School, Arkansas State, Boise State, North Carolina State and Appalachian State — prior to being hired at Missouri.

RELATED: Nick Saban still searching for the right mask ahead of Missouri game

Drinkwitz will bring a lot of different looks both offensively and defensively; however, Alabama must be prepared for what the 37-year-old throws at it. Despite not having Ronald Williams Jr. (arm), the Tide is bringing a healthy roster into the contest.

In getting fans set for the game, yours truly of Touchdown Alabama Magazine looks at five impactful players for the Tide.

The goal in beating a fast pace, uptempo offense is disrupting its timing.

As a sophomore, DJ Dale is ready to become a playmaker at defensive tackle. He played in 10 games last year, but a knee injury kept him out of the last three matchups. Dale, a native of Birmingham, Ala., totaled 17 tackles, three tackles for loss, one sack and one quarterback pressure.

Missouri has a couple of starters back on its offensive line, yet it has not faced a player like Dale.

The 6-foot-3, 307-pounder has an opportunity to blow up a lot of plays in the backfield. If he can get consistent penetration, it will free up LaBryan Ray, Justin Eboigbe, Dylan Moses, Christian Harris and others to pursue the football and make plays.

He goes from being a speciality player to an every down receiver this season, but teams still have to take Jaylen Waddle into account on kick returns and punt returns.

The junior is the most explosive player in college football for both aspects, as he has three career touchdowns on special teams.

RELATED: Which punter will travel with Alabama to face Missouri for its season opener?

Waddle and Mac Jones have a connection in the passing game, which was featured versus Auburn in the 2019 Iron Bowl, and Steve Sarkisian will go to it as often as he can. Not only will he take eyes off DeVonta Smith, in terms of defensive backs, but Waddle will also draw attention away from John Metchie. The sophomore earned the starting job as the No. 3 receiver.

This is the first test in a season where Mac Jones looks to prove his critics wrong.

Alabama looks to achieve balance, but Sarkisian will take shots with Jones. The redshirt junior has a lot of confidence in himself and his teammates, and he had a really good fall camp. When he replaced an injured Tua Tagovailoa last year, Jones proved he could operate the offense and put points on the scoreboard. The Tide will try to establish the ground game with its offensive line first, but expect at least 20 to 25 passes from Jones. He intends to get the chemistry going early and often with his receiving corps.

With a veteran offensive line in front of him, Najee Harris is set to start his Heisman campaign versus Missouri.

He collected his first career 1,000-yard rushing season (1,224) in 2019, but he sees bigger and better this year. The senior from California worked all summer for a moment to show he is the most complete running back in college football.

Missouri returns its top tackler in Nick Bolton and a superstar defensive lineman (Kobie Whiteside), but it will be a challenge in handling Harris.

Alabama will rotate at least two others behind him — Brian Robinson Jr. and Trey Sanders — but Harris is the primary runner.

He anticipates settling Jones into the game by having the Tide in manageable downs and distances.

The captain is back on defense.

Dylan Moses missed all of 2019 with a knee injury, but he has returned to strike fear into the heart of his opponents.

Facing this kind of offense will test the stability of his knee. He will have his teammates lined up correctly and get calls made across the board, but he has to display lateral quickness upon the snap of the ball. Having him back on the field is important, especially when it comes to directing traffic and making secure tackles.

Missouri could start its dual threat quarterback in Shawn Robinson and if it does, Drinkwitz is going to want him on the edge with run-pass-option (RPO) opportunities against the Tide.

Moses has to make sure he and his defense are set throughout the game.

He was one of two true freshmen (Malachi Moore) starters on defense, according to the depth chart.

At jack linebacker, Anderson is going to have a chance to create sacks and other negative plays in Missouri’s backfield. He was a specialist in this area at Dutchtown High School, but now the native Georgian is set to turn heads at the collegiate level.

Depending on the number of players the Tigers have in max protection, Anderson could have a field day.

RELATED: A healthy and confident Will Reichard can regain Alabama fans’ trust in Tide kicking game

Alabama has not had a fearsome edge rusher since Tim Williams; nevertheless, it really likes what Anderson brings.

﻿
Nick Saban still searching for the right mask ahead of Missouri game
WATCH: Which Alabama defensive commit can make an immediate impact?
To Top