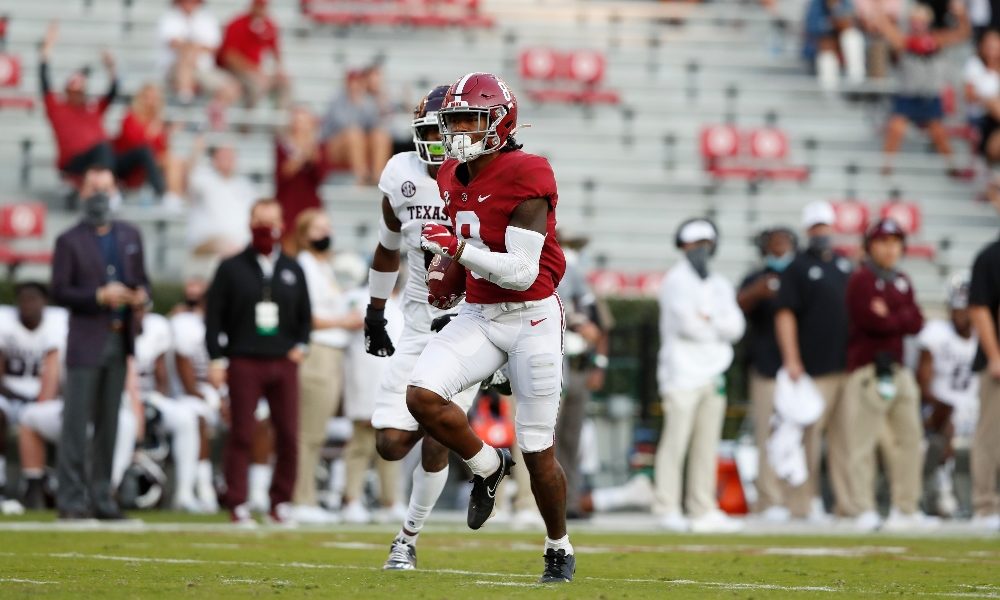 It didn’t take long for Alabama to find it’s third receiver on offense. Even after losing players like Jerry Jeudy and Henry Ruggs to the NFL Draft, the Canadian sophomore John Metchie has seamlessly transitioned into his starting role. And on Saturday against Texas A&M, Metchie announced himself to the country as one of the rising stars in college football.

Metchie wasted no time against the Aggies for on Alabama’s third play on offense he broke free for a 78-yard touchdown pass from quarterback Mac Jones.

But that wasn’t the only time Metchie ran wild in Bryant-Denny Stadium. He and Jones connected two more times throughout the game for scores as he ended the day with a total of five catches for 181 yards and three touchdowns.

He was the perfect complement to fellow wide receivers Jaylen Waddle and DeVonta Smith who also turned in great performances.

Jones was also impressed with the game Metchie, as he was able to get the sophomore his first career touchdowns. But the ones that got away were also on the quarterback’s mind.

“That first touchdown, third and long, — we don’t want to be in that situation so we’ve got to get better on first and second down — Metchie did what he’s supposed to do. I think he had a big game today, some missed opportunities from me on an overthrow. He played really well.”

Metchie was a part of the Crimson Tide’s 2019 recruiting class and was able to make an appearance in all 13 games in his initial season with the team. Although his role was small he still caught four passes for 23 yards in his time on offense.

It’s safe to say that those numbers will be exceeded on the regular for the 6-0 wideout, sometimes even in as small amount a time as one play.