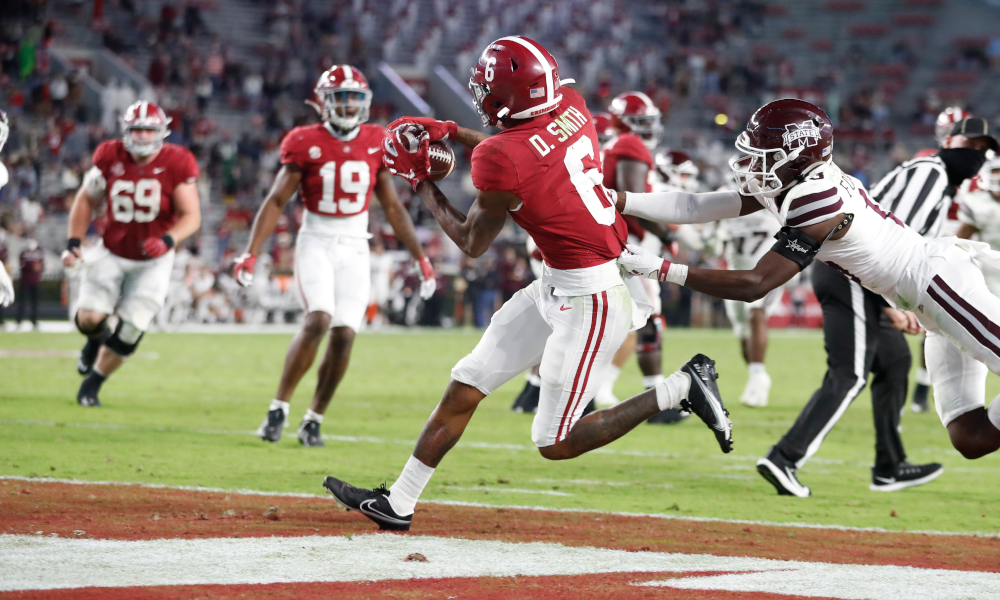 Regardless of those who look at Ja’Marr Chase (LSU) and Jaylen Waddle (Alabama) as being better than him, Pro Football Focus projects DeVonta Smith of Alabama football as the clear-cut best wide receiver in college football.

He may not be as fast as Waddle or as flashy as Chase, but Smith is the most consistent with his production.

If he was only satisfied with being one-half of the historic “2nd and 26” that would be okay; however, Smith desires to be the greatest receiver to come through the program. He has built off his championship moment in becoming the most sure-handed weapon on the team in the last three years. A native of Amite, La., he has viciously attacked defensive backfields this season.

With an injury to Waddle, Smith’s role has increased as the No. 1 target for Mac Jones.

After some early struggles versus Mississippi State, the former four-star caught a game-high 11 passes from Jones for 203 yards receiving with four touchdowns. He brought in two long scores of 53 and 35 yards in a 41-0 win for the Crimson Tide, while averaging 18.5 yards per catch. In Waddle’s absence, Smith leads Alabama in receptions (56), yards (759) and touchdowns (eight). He is averaging 126.5 yards per game and is third in the NCAA for catches and receiving yards.

Smith is tied for third in college football for touchdown catches.

He has three 100-yard performances this year, including one 200-yard game versus Ole Miss.

The 6-foot-1, 175-pounder has owned both Mississippi schools and the University of Georgia in his career. Smith has eight 100-yard outings in his tenure and three 200-yard games. When it comes to how he stacks versus the all-time greats for Alabama, Smith is fifth for receptions (174), third for receiving yards (2,868) and shares the record for touchdowns (31).

He will have an opportunity to surpass Amari Cooper (2012-14) next week against the LSU Tigers.

It was three years ago that Cam Sims, former Alabama receiver, told yours truly of Touchdown Alabama Magazine at an open practice at Bryant-Denny Stadium that Smith had the ‘best hands’ on the team. He said this prior to Smith starting his freshman campaign and the young man has not looked back.

With NFL scouts continuing to watch film, more eyes need to turn to Smith as the best receiver for the 2021 draft class.