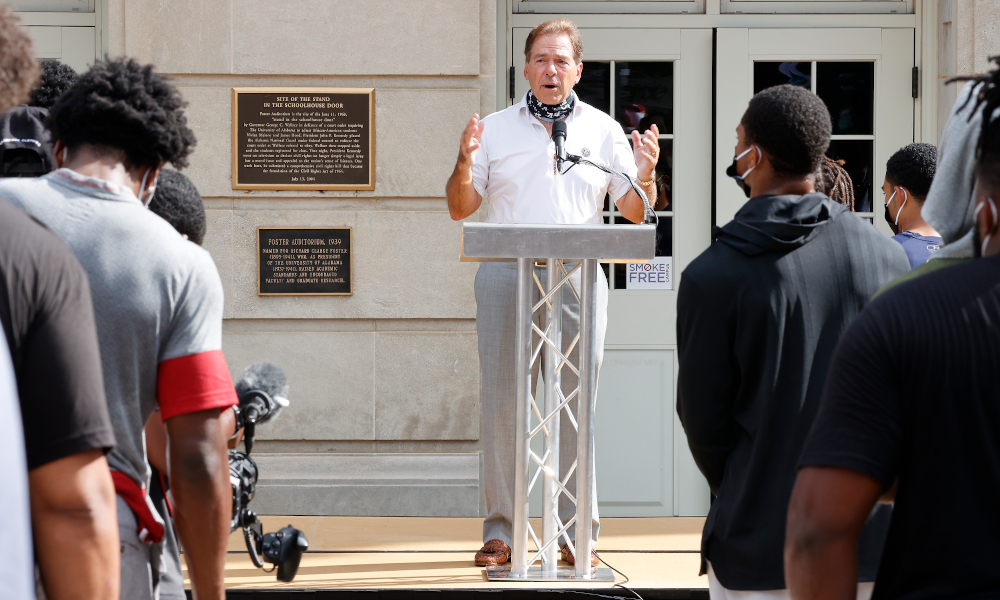 He is guiding the University of Alabama football program through a global Coronavirus pandemic, and Nick Saban has the Crimson Tide undefeated at 6-0 with the No. 1 ranking in college football.

The 69-year-old is in search of his seventh national championship as a head coach, which would put him over Paul W. “Bear” Bryant. As he’s in his 14th season, Saban has been consistent with having the Tide in the conversation to win a national title each year. He was added to the Paul “Bear” Bryant Coach of the Year watch list on Wednesday and on Thursday, Saban was one of 19 head coaches selected to the midseason watch list for the Bobby Dodd Coach of the Year award.

RELATED: An inside look at how Kentucky matches up with Alabama this weekend

The announcement came from the Bobby Dodd Coach of the Year Foundation and Chick-fil-A Peach Bowl.

With it being the most coveted coaching honor, the Dodd Trophy celebrates the head coach of a team who enjoys success on the gridiron, while also stressing the importance of scholarship, leadership and integrity — the three pillars of legendary coach Bobby Dodd’s philosophy.

Despite this being an unprecedented year, Jim Terry, chairman of the Bobby Dodd Coach of the Year committee said his group considered a variety of factors when compiling the list.

“At the end of the day, we selected the coaches who we felt truly embody Bobby Dodd’s three pillars of scholarship, leadership and integrity, both on and off the football field,” Terry said.

Coach Saban not only has a balanced team on the field, but student-athletes for Alabama were the main voices behind the #WeWantToPlay movement over the summer. Because of players such as Najee Harris and Mac Jones, consumers of college football were able to have a season amid the pandemic. Harris has been a voice on campus for social justice and to have a more unified campus. He’s also turned in over 50 hours of community service, including the Alberta Head Start Unity Project.

To add with this, Harris is supporting Braxton Weidman, an 8-year-old from Birmingham, who is recovering from two brain surgeries.

Jones, on the other hand, has become the biggest blessing to Victoria Ray and her family.

According to Rick Karle, a news anchor for WVTM Channel 13, Ray was seriously injured in a car accident on Oct. 29.

Although her friend, Riley Webster, did not make it out the accident, she endured a list of life-threatening injuries. Ray lives to tell the story as a freshman at the University of Alabama, but she is more thankful that her favorite player thought about her.

Mac Jones was scheduled to face Mississippi State on Halloween, but he made it his business to gift an autographed Alabama football to a young woman that admires him. As she continues to fight and start rehab, Ray will cheer even harder for her favorite team and her No. 1 quarterback that others doubted.

Along with excellence on the field and in the community, Saban teaches excellence in the classroom too.

He has a program with an Academic Progress Rate (APR) of 990, which is tied for third-highest among the head coach named to the Dodd Trophy watch list. Saban trails only Pat Fitzgerald of Northwestern (995) and Dabo Swinney of Clemson (993) for APR.

He is one of three former winners on the list, joining Brian Kelly and Dabo Swinney, as Saban won the honor in 2014.

﻿
An inside look at how Kentucky matches up with Alabama this weekend
To Top
%d bloggers like this: