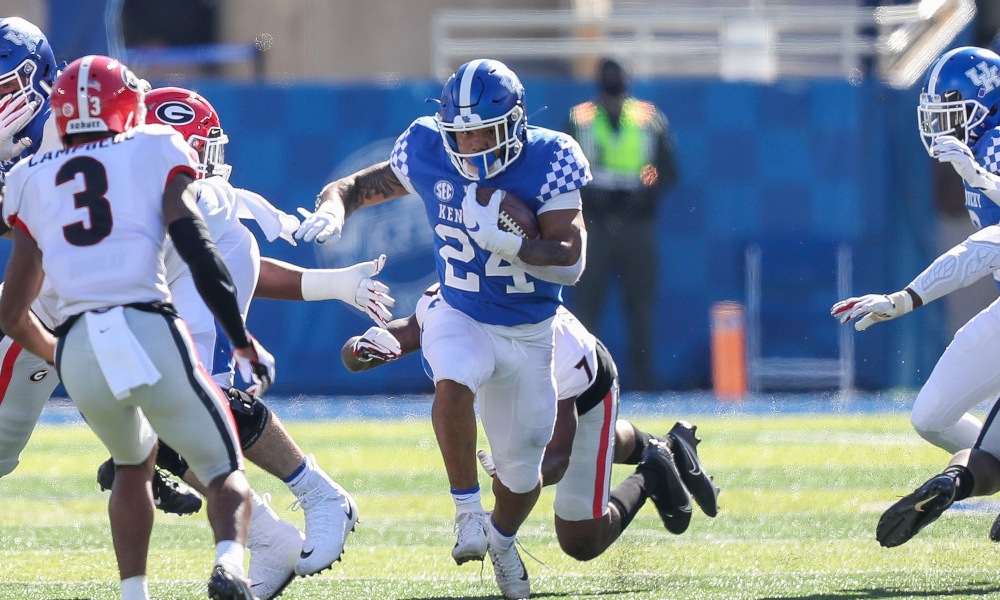 After resting for two weeks, Alabama football returns to action on Saturday at Bryant-Denny Stadium.

In it carrying an undefeated season (6-0) and the top ranking in college football, Nick Saban and the Crimson Tide will battle Mark Stoops and the Kentucky Wildcats on SEC Network at 3:00 p.m. CT.

Despite facing programs like Missouri, Texas A&M and Ole Miss that boasted dual threat quarterbacks, Alabama is set to have a warfare in the trenches against Kentucky.

Even with its 3-4 record, the Wildcats are a much better football team.

Since taking over the program in 2013, Stoops has seen a change in the culture through the last five years. Kentucky has produced four straight winning seasons since 2016, including a 10-win campaign in 2018 with Benny Snell at running back.

Regardless of the pieces it returned on the offensive line, at running back and on defense, the Wildcats have struggled to finish games it was projected to win. It has a difficult challenge in competing with Alabama; however, Stoops feels that his rushing attack and defense will keep the game closer than the experts think.

The Wildcats have forced 11 interceptions through seven games.

Alabama has worked on fundamentals through two weeks and as it prepares for Kentucky, yours truly of Touchdown Alabama Magazine provides a look at the impact players for the Wildcats.

Of its two running backs, Chris Rodriguez brings the power for Kentucky.

The sophomore pounded the SEC’s top run defense and one of the best group nationally in Georgia for 108 yards rushing on 20 carries on Halloween. Kirby Smart had the Bulldogs in a lot of seven to eight-man looks up front, but Rodriguez averaged 5.4 yards per rush.

The 5-foot-11, 224-pounder has a strong frame and displays excellent contact balance in the hole.

He has a knack for carrying tacklers on runs and he gets stronger throughout matchups.

Rodriguez leads the Wildcats in carries (88), yards (562) and touchdowns (six). He averages 6.4 yards per carry and 80.3 yards per game behind a veteran offensive line. In its matchup with Georgia, he took some direct snaps out the wildcat.

Asim Rose, a senior, is the speed back for Kentucky. He has 291 yards rushing with one score on 55 carries.

Alabama must fit the runs well and consistently finish tackles.

Darian Kinnard returned as one of the best offensive tackles in the SEC.

Kentucky’s starting lineup of Kinnard, Landon Young, Drake Jackson, Luke Fortner and Kenneth Horsey is one of the best run-blocking groups in college football. Kinnard, a right tackle, projects as one of the top linemen for the 2021 NFL Draft — especially after his performance through 13 games as a junior in 2019. He secured 32 knockdown blocks, committed one penalty in 702 snaps, and helped set the school’s rushing record with 3,624 yards and 36 scores on 6.3 yards per carry.

The Wildcats want to run the ball off his side.

For Alabama, Christopher Allen has to win the edge at strong-side linebacker against Kinnard.

If he can succeed, the Crimson Tide will limit Kinnard from creating success for Rodriguez in the run game.

It does not trust its passing game much; however, Josh Ali is a capable receiver for Kentucky.

After recording three touchdowns in 2019, the senior has 334 yards receiving with one score on 34 catches this season.

Listed at 6-feet and 193 pounds, Ali averages 10.1 yards per catch. The Wildcats must decided between Terry Wilson and Joey Gatewood to be its starting quarterback, but Ali does provide a target on the outside.

Alabama also has to watch him on punt returns as well, seeing that Ali excels at getting his offense in good field position.

Part of Kentucky’s success on defense is the play of Jamar Watson.

He leads the team in sacks (3.5) and quarterback hurries (five), while having 22 tackles (four for loss) and one interception from his linebacker spot. The senior will have the responsibility of pressuring Mac Jones and stuffing Najee Harris.

Alabama, like Kentucky, has one of the best offensive fronts. The group of Alex Leatherwood, Deonte Brown, Landon Dickerson, Emil Ekiyor and Evan Neal have allowed seven sacks, while creating balance in the run and passing game.

He is very familiar with the Tide after facing it as a freshman in 2018. Joseph has good eye discipline, plays with leverage and excels at breaking on passes. He chimes in with 22 tackles and one pass breakup to pair with his takeaways.

Joseph will try to create at least one turnover.