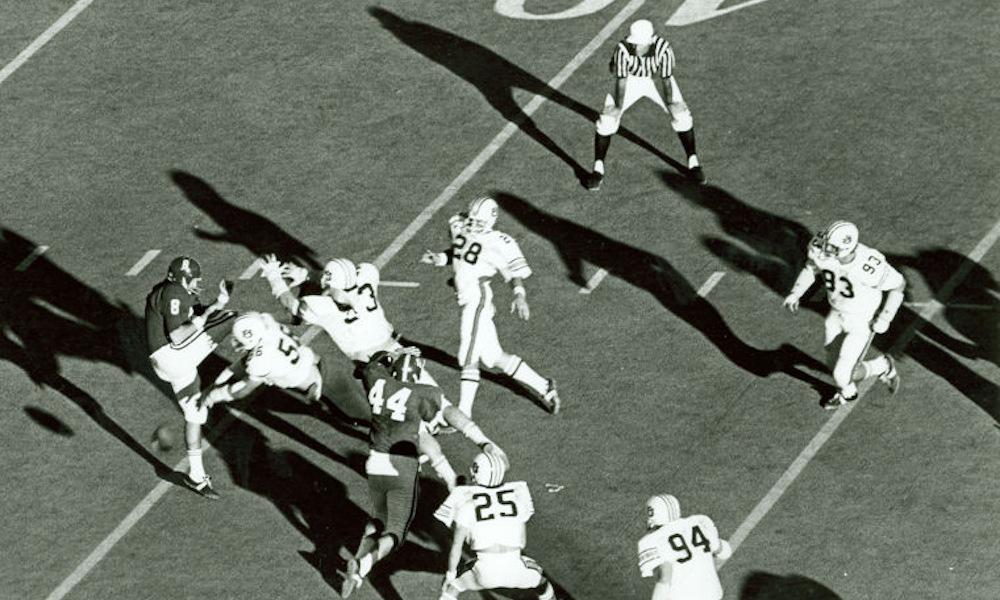 With the 85th matchup of the Iron Bowl scheduled for Saturday at Bryant-Denny Stadium, the staff at Touchdown Alabama Magazine has compiled a series of 10 stories on the best games from the rivalry.

The series will break down the lead up to each game, the significance of the matchup, and the game itself as we go down memory lane of Alabama versus Auburn. We will provide two to three stories per day, until kickoff this weekend.

Lead up to the Game

After dominating Auburn in 1971, Paul Bryant and the Alabama Crimson Tide were crowned champions of the Southeastern Conference for the fifth time in his tenure. The Tide earned a 31-7 victory over the Tigers in a matchup that featured both schools in the top-10 of the Associated Press Poll and both teams were undefeated.

Coach Bryant saw his defense stifle the Tigers in the first quarter, and Terry Davis took advantage with a pair of rushing touchdowns for the Tide.

It struggled moving the ball throughout the game on Alabama; however, Auburn managed to have one scoring drive in the second quarter.

Harry Unger found Terry Beasley on a 31-yard touchdown pass, cutting the Tide’s lead to 14-7 at halftime. As for the second half, it belonged to Johnny Musso and Alabama’s fearsome defense.

Both touchdowns came in a massive year, where he had 1,088 yards rushing and five scores.

Coming into the 1972 season, Auburn was not expected to do much. However, it defeated three programs in the top-25 and captured a 9-1 record with the No. 9 ranking in the nation.

Alabama entered the matchup with another undefeated regular season on the line at 10-0.

Bryant and the Tide were ranked at No. 2 and scored at least 40 points in four games that year.

Significance of the Game

Before it would go on a nine-game (1973-81) winning streak versus Auburn, Alabama was looking to gain back-to-back victories over the Tigers in the rivalry. To add with this, the Crimson Tide was also going after a second straight undefeated season with Paul Bryant.

As for the Tigers, it was not projected to win the matchup yet it wanted to proved people wrong.

Although it had captured its second straight SEC title with a win over LSU, a one-point loss to Auburn (17-16) ended the Tide’s perfect season.

It would also suffer its second consecutive loss to Texas in the Cotton Bowl Classic.

The victory was Auburn’s second one in the 1970’s, as Alabama owned the decade with eight wins. For the Tigers, it punched its ticket to the Gator Bowl (defeated No. 13 Colorado, 24-3) and its excellence on special teams hurt Bryant at his own game.

The matchup would not earn its moniker, “Punt, Bama, Punt,” until the fourth quarter.

Much like the 1971 game, Auburn’s offense could not score in the first quarter. Even with both defenses keeping the contest scoreless in the first period, the Crimson Tide struck first out of the wishbone. Steve Bisceglia capped off a drive with a 3-yard touchdown plunge in the second quarter (extra point was missed). Alabama’s defensive unit held firm and upon its offense getting the ball back, Coach Bryant’s group moved the ball on another drive that ended on a 24-yard field goal from Bill Davis.

The Tide felt like its second straight win was going to happen, especially with a 9-0 lead at halftime.

RELATED: Alabama’s offensive line will be key against Auburn

Things went from bad to worse for Auburn, as it was shutout in the third quarter too.

Alabama added to its lead with a 6-yard touchdown run from Wilbur Jackson, to go up by a score of 16-0. Prior to the Iron Bowl, the Tigers had based the season on being relaxed and confident. No one expected it to have a big year, but it was responsible for nine wins and it had moments where games broke in its favor.

Regardless of his love for offense and defense, Bryant would constantly preach special teams to players at Alabama. He felt that good special teams was the foundation of a championship team. Bill Davis was excelling in the kicking game, but the rivalry became a nightmare for Greg Gantt at punter.

It would make a 42-yard field goal off the leg of Gardner Jett in the fourth quarter, but Auburn could not punch in an offensive touchdown. Now trailing 16-3, the Tigers needed a spark and it got one from the most unlikeliest of places.

David Langner, a defensive back, had intercepted a pass off Alabama’s Terry Davis earlier in the game, and was one of the marquee leaders for Auburn. He and his teammates, Bill Newton and Roger Mitchell, were on the punt return team.

When the first punt attempt of the fourth quarter reached Gantt’s hand, all three dug in and went for the ball.

RELATED: Shaun Dion Hamilton gives back to hometown of Montgomery in feeding 500 families for Thanksgiving

Newton stretched out and got the block, and the ball bounced up into Langner’s arms. He took it for a 25-yard score and life returned to the Tiger fans. The moment was rough for Gantt, but he even felt like it would not happen again. Auburn’s exploits on special teams ignited the defense to force another three-and-out for Alabama. Gantt quickly returned to the field in another punting situation and this time, he had the hope of his protection allowing him to get the kick off. Just like before, the Tigers really needed a spark.

As hard as the defense worked, the offense struggled and it was leaning on special teams to help out.

The trio did not see the unthinkable happening again; they were just players trying to get something to bounce in Auburn’s favor. So, the they dug deep again and went after the punt.

Alabama’s protection broke down, Newton got through again and blocked a second punt off Gantt. The ball found its way into Langner’s hands again and he took it in for a 20-yard score.

Tiger fans could not believe what had happened. Coach Bryant was stunned.

A second punt, a second block and a second touchdown for Auburn. Special teams had given the Tigers a 17-point swing in the most incredible fashion. Terry Henley, Auburn’s running back, was confident in his team before the game started.

He made the comment, “We’re going to beat the No. 2 out of Bama,” to reporters to start the week.

One thing for certain is Auburn harassed Gantt well in getting a 17-16 win.

Alabama had one final chance to comeback, but Langner victimized again with an interception.

After the turnover, Langner came to the Auburn sideline and his coach was disappointed. He made the play, but Ralph “Shug” Jordan wanted the Tide to punt again. All in all, the Tigers got what it wanted — which was pulling victory from defeat.

When the final statistics came out, one could tell that special teams was the lone way for the Tigers to win. Alabama had more first downs (16 to 7), more rushing yards (235 to 50), more offensive plays (72 to 52) and more total yards (251 to 80) yet it could not secure a win over its in-state rival.

Auburn rolled Toomer’s Corner in jubilation after the game.