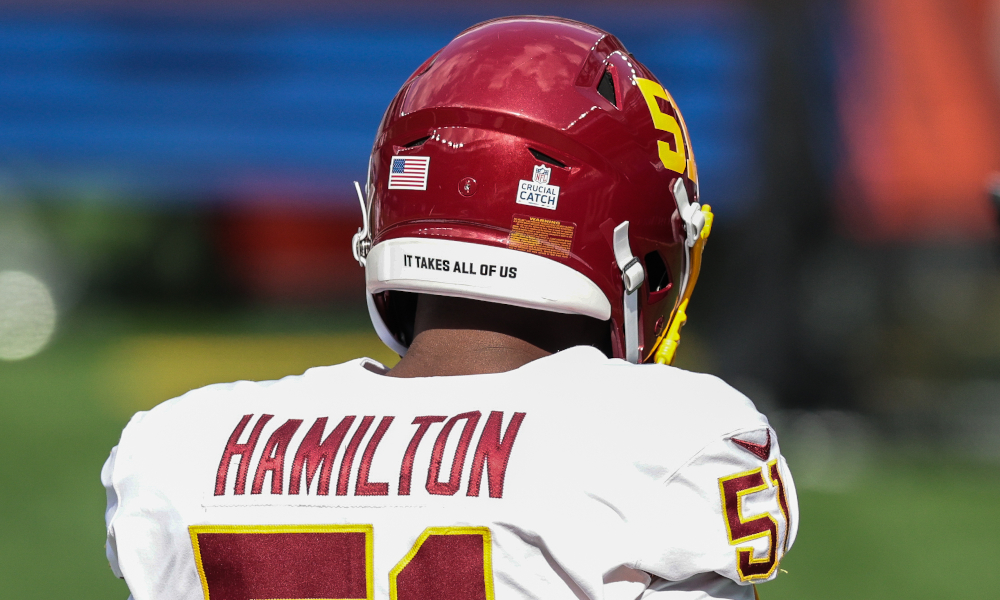 When he retires from coaching, Nick Saban will be remembered for producing great men than great players.

His two messages to student-athletes have always been there is life after football and to create a positive impact on the community.

Every individual has taken his philosophy to heart and the latest one happens to be one of the smartest middle linebackers to come through the program.

A native of Montgomery, Ala., Shaun Dion Hamilton was a star athlete at George Washington Carver High School and he transformed himself into being a strong player for the Crimson Tide.

He played from 2014 to 2017, helping Alabama capture three Southeastern Conference Championships and a pair of national championships.

RELATED: Alabama’s offensive line will be key against Auburn

Despite a serious knee injury in 2016, Hamilton was still taken in the sixth round of the 2018 NFL Draft.

In his third year with the Washington Football Team, he remains with a heart toward Montgomery.

With everyone dealing with the global Coronavirus pandemic, Hamilton chose to give back to his family and community in feeding 500 families this Thanksgiving. He initially wanted to feed 200 families, but his teammate — Thomas Davis Sr. — pitched in and the number grew to 500. While he is scheduled to play the Dallas Cowboys at AT&T Stadium at 3:30 p.m. CT, Hamilton had his parents and family members in the community distributing food.

Throughout his journey, he said he is blessed to be in the position he’s in.

Former @GWCarverFB, @AlabamaFTBL & now @WashingtonNFL linebacker Shaun Dion Hamilton (@iam_sdh20) gave back to his hometown today by providing 500 Thanksgiving meals to families in Montgomery. Even though SDH couldn’t be there – his parents passed out meals wearing his #51 jersey pic.twitter.com/kKhb0qL3Kp

“With all the things with this COVID-19 ordeal, you are going to have a lot of people that can’t travel to be with families,” Hamilton said. “It is going to be hard to get food. A lot of people have been laid off jobs. It is just anything that I can do to help my city, my family … they are doing what they have to do to help me with me being up here. My teammate, Thomas Davis, he is a great guy. He saw that I posted that I was paying for 200 meals and the great guy he is, he said ‘let’s pump that thing up to 500.’ So, shoutout to him for paying for 300 more meals.”

Different members of Hamilton’s family donned either No. 20 from his days at Alabama or No. 51 for Washington.

RELATED: Nick Saban shares how he will be watching the Iron Bowl Saturday

As he prepares to face the Cowboys on Thanksgiving, Montgomery is forever thankful for Hamilton.