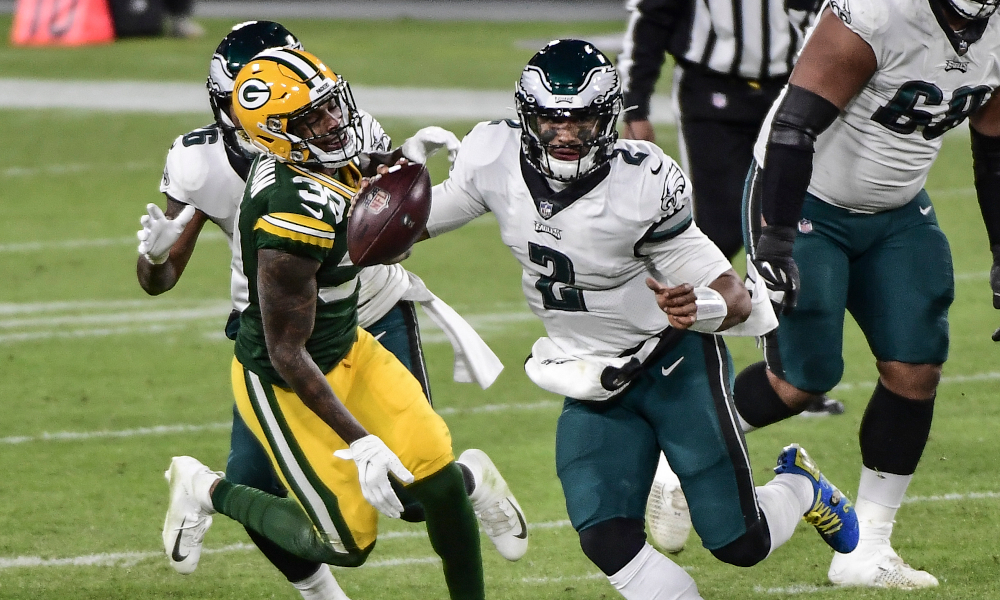 Now, his moment has come to operate the Philadelphia Eagles.

After dealing with the struggles of Carson Wentz, Doug Pederson made the switch to Jalen Hurts versus the Green Bay Packers last week at Lambeau Field. Despite a 30-16 loss, Eagle fans witnessed a different atmosphere on the field.

A native Texan and former Alabama football quarterback, Hurts brought a spark to the offense and engineered a comeback in the second half.

With the New York Giants leading the NFC East, Pederson now feels that it’s time to move into Philadelphia’s future with its second-round pick.

Hurts was named the starter for Sunday’s game against New Orleans and while the Saints are a tough out, people are excited to see him.

Hurts is at his best upon facing adversity, and he is prepared to step in and right the ship.

For reporters that have not gotten a chance to speak to the Eagles’ starter for the week, Nick Saban offered one message to them.

Before getting drafted, Hurts brought tears to Saban’s eyes in the 2018 SEC title game.

“I feel bad for you guys in Philadelphia if you haven’t got to meet him,” Saban said of Hurts. “He’s a really easy guy to fall in love with.”

RELATED: Alabama’s Patrick Surtain is focused on one thing: winning a national championship

In reflecting back on Saban’s tears, Hurts replaced an injured Tua Tagovailoa in the fourth quarter of the 2018 SEC Championship matchup against Georgia. As it trailed 21-28, Hurts led a drive that ended on a 10-yard touchdown strike to wide receiver Jerry Jeudy in the back of the end zone. He tied the game on that possession, and then cemented his legendary status on the following series. Alabama capped off the drive with a touchdown run from Hurts, earning a 35-28 win over the Bulldogs.

He would also take an Oklahoma team to the CFP last season.

Coach Saban knows what his former signal caller can do. When it comes to the Eagles, the weekend can’t get here fast enough.