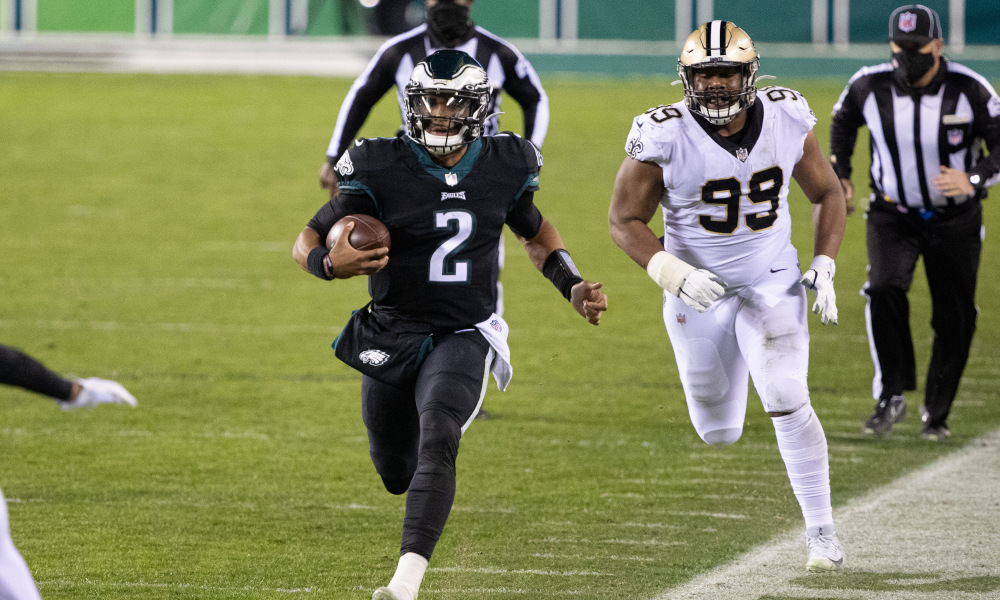 “I am a quarterback.”

This was his answer to every question from media pundits in the NFL Draft process that wanted to know if he was open to switching positions in the National Football League.

Since childhood, Jalen Hurts knew he was two things: a leader and a quarterback. He carried the mentality from a four-star prospect at Channelview (Texas) High School to Alabama’s starting quarterback as a freshman in 2016.

He has learned so many lessons on his journey, but the biggest one is not letting outside factors determine his destiny. Hurts guided the Crimson Tide to a Southeastern Conference title in 2016 and emerged from the bench in 2018 to lead the program to another one. Even in losing the starting job to Tua Tagovailoa, the perseverance Hurts displayed to still be a huge part of the team helped him capture a national championship (2017) and become a fan favorite.

RELATED: Dan Mullen said Mac Jones is similar to Kyle Trask, and referred to him as a ‘game manager’

He may never understand why the Philadelphia Eagles took him in the second round; nevertheless, Hurts has always been about making the best of every situation.

After the offense struggled with Carson Wentz against Green Bay, Hurts entered the game and provided a spark. Despite a loss, Doug Pederson and the Eagles felt like it was time to make a change.

The native Texan was named the starter for Sunday’s meeting against the New Orleans Saints, and Hurts brought smiles to fans across the nation.

Nick Saban told reporters that Philadelphia will ‘fall in love’ with Hurts and he was right.

On the heels of a four-game losing streak, Hurts got his first career win in defeating the Saints.

He completed 17 of 30 passes for 167 yards with one touchdown. His scoring toss came in the second quarter on a 15-yard pass to Alshon Jeffery. Like he did in college, Hurts also extended plays with his legs. He totaled 106 yards rushing on 18 carries, pushing the Eagles to a 24-21 victory at home. Hurts accounted for 12 first downs (six passing, six rushing) and paced Philadelphia to 413 total yards of offense.

Regardless of one lost fumble, one could not deny the offensive attack looks more energized with him.

.@JalenHurts delivers a strike to Jeffery on 4th down!#NOvsPHI | #FlyEaglesFly

Upon the conclusion of the game, Hurts carried his best Coach Saban impersonation in his presser.

Jalen Hurts ⁦@JalenHurts⁩ won his first gave as #Eagles starting QB. No question a lot more designed runs and scrambles. So how much does he think his kegs made it a different game in win against #Saints. ⁦@SportsRadioWIP⁩ pic.twitter.com/u5ED2tuphq

He talked about being excited to win, but also mentioned the Eagles ‘left a lot of money on the table.’ Hurts will give himself 24 hours to enjoy the win, and then he looks to return to practice.

If it can end the season at 7-8-1, the Eagles would feel good about Hurts moving forward.

Although it prides itself on making the playoffs and winning Super Bowl titles, finishing the regular season on a four-game winning streak with Hurts would suffice.

According to the NFL Communications department, Hurts joins Lamar Jackson as the second quarterback to rush for 100-plus yards in his first career NFL start.

With 106 rushing yards today, @Eagles QB @JalenHurts joined Lamar Jackson as the only QBs with 100+ rushing yards in their first career start in @NFL history. pic.twitter.com/WghBlbaWPF

The time he spent with Dan Enos (quarterbacks’ coach) at Alabama in 2018 and his one season at Oklahoma (2019) under Lincoln Riley paid off in the long run. Hurts has even dedicated moments to improve his game on his own time.

He is proving doubters wrong and it’s only the beginning.