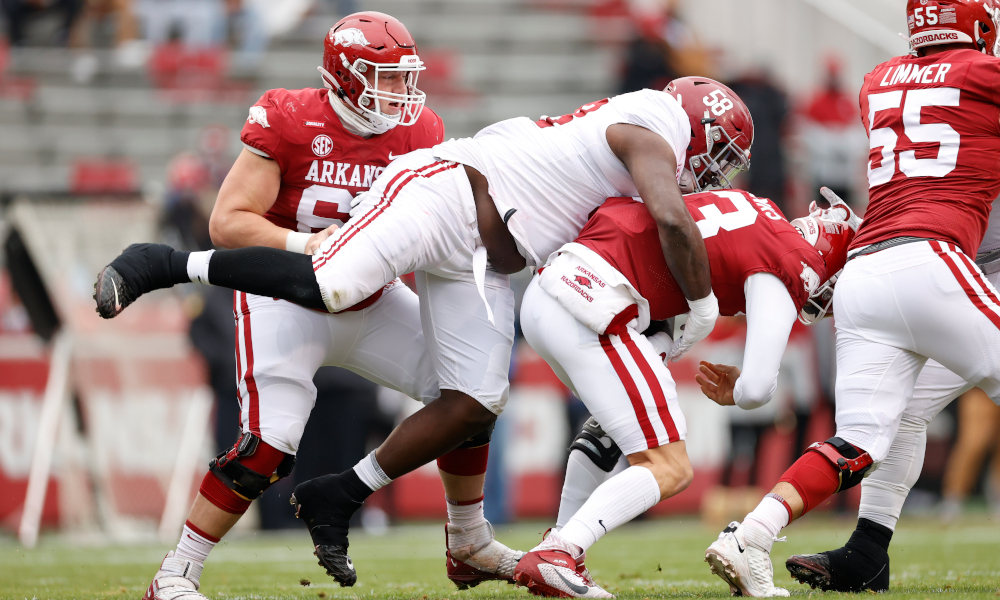 He has gone from a limited role to a primary factor, and he is clicking at the right time.

For Alabama football, Christian Barmore was a name discussed by fans throughout last season and during this year to be an impactful force on defense. The energy he created off the bench in 2019 was second to none. He brought the crowd alive at Bryant-Denny Stadium and his passion for making big plays influenced his teammates.

As a redshirt freshman, it was a game versus Southern Mississippi that exposed him to the masses. His moment in this campaign occurred against Georgia, in him totaling one sack, one tackle for loss, two pass breakups and one forced fumble in a 41-24 win for the Crimson Tide.

Since his performance from Oct. 24, the Philadelphia (Pa.) native has been dominant in Alabama’s defensive turnaround.

In the last six games for the Tide, Barmore chimes in with five sacks, 5.5 tackles for loss, five quarterback hurries, three pass breakups and two forced fumbles. The 6-foot-5, 310-pound defensive lineman was a nightmare for the offensive lines of Auburn, LSU and Arkansas.

He ripped through all three units for a combined four sacks, four tackles for loss, two quarterback hurries and one forced fumble. With him getting more time on the field, people are starting to see why Alabama must have him in games.

After posting some good numbers a year ago, Barmore has raised his efforts — especially in creating negative plays.

Florida lost to an LSU team on last week that was not healthy on defense.

Regardless of being without Derek Stingley and Cordale Flott, the Tigers still got pressure to Kyle Trask and forced three turnovers. Dan Mullen and the Gators will have an unpleasant task of neutralizing a pass rusher in Barmore. He’s playing his best football and he is prepared to harass Trask in this week’s Southeastern Conference Championship showdown.