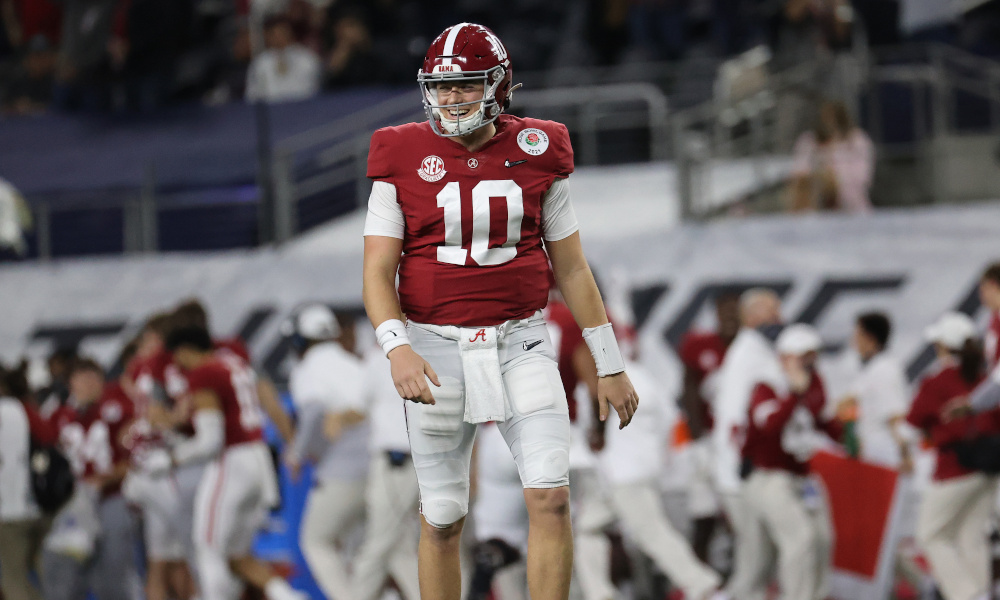 He has gone from being a three-star recruit and a scout-team quarterback, to becoming an SEC Champion, a Rose Bowl Game winner, a Heisman finalist, a fan favorite, and now needs one final victory to be a national champion.

Mac Jones has proven to be more than enough for the University of Alabama football program.

His persona of “The Joker” and his competitive nature guided the Crimson Tide back to the College Football Playoff and had its explosive offense against Notre Dame for a CFP semifinal matchup. Despite not scoring 35 to 40 points, Jones propelled the Tide to a 31-14 win over the Fighting Irish on Friday at AT&T Stadium — advancing it into the CFP National Championship Game.

The redshirt junior got Alabama going early with two touchdown passes in the first quarter.

He found DeVonta Smith on a 26-yard strike and Jahleel Billingsley for a 12-yard score. Both touchdowns capped off scoring drives expanding 70-plus yards. Jones would hook up with Smith two more times, including a long score of 36 yards in the second quarter. He finished with 297 passing yards and four touchdowns on an 83.3 percent completion rating (25-for-30 passing).

His output versus Notre Dame moved him to 4,036 yards on the season, making him the first-ever 4,000-yard passer of the Nick Saban era at Alabama. He also now has the single-season school record for passing yards, surpassing Tua Tagovailoa’s mark of 3,966 yards in 2018.

His 36 scoring tosses has him second all-time for a single-season, as he stands behind Tagovailoa’s record of 43 in 2018. Jones has seven performances with at least four touchdown passes, including a pair of five score games versus Auburn and Florida (SEC Championship).

During the preseason, there was much conversation as to whether Jones would be enough to win a national title. His answer has been a resounding “Yes” thus far, and he looks to finish the job on Jan. 11 against Ohio State.