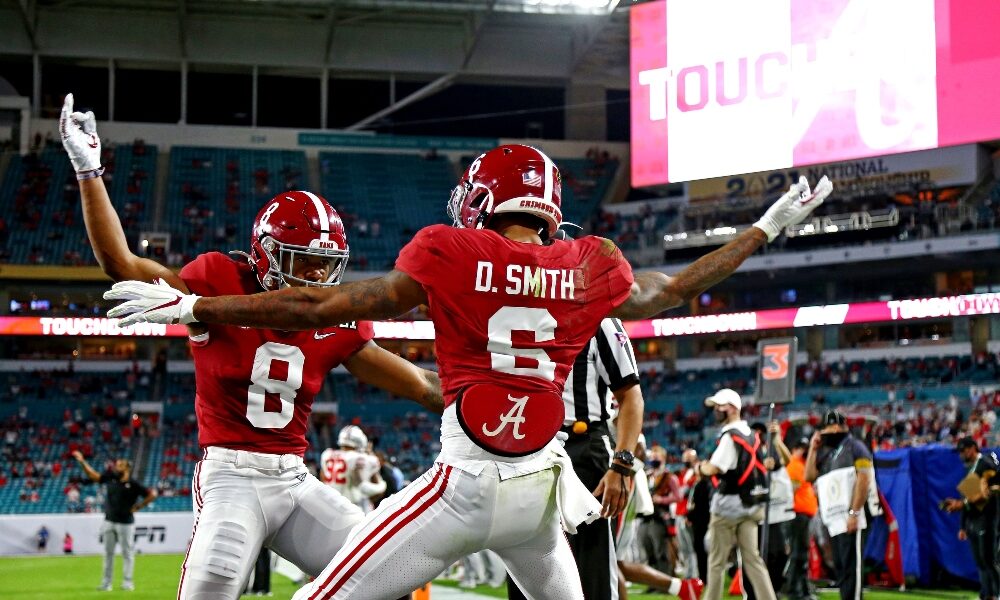 He is a Heisman Trophy winner, Fred Biletnikoff Award, Unanimous First-Team All-American and holds every career record for wide receivers at the University of Alabama. While the Louisiana native is about to become immortalized in a Daniel Moore painting, he has also accepted his invitation to the Reese’s Senior Bowl in Mobile, Ala. The announcement came on Monday from Jim Nagy, the executive director of the venue.

Due to a thumb injury he sustained against Ohio State in the College Football Playoff National Championship Game, Smith will not participate in any on-field activities. However, he will go through team meetings with Coach Brian Flores and the Miami Dolphins along with interviews from personnel members of all 32 NFL teams.

Excited to add Heisman winner Devonta Smith to this year’s Reese’s Senior Bowl. He will not be cleared to participate in any on-field activities due to thumb injury but he will go thru team meetings with Coach Flo’s🐬 staff and interview with decision-makers from all 32 clubs.

With Flores coaching the South Team, this is a huge opportunity for the Dolphins to establish a relationship with Smith and go about the process of taking him with the No. 3 overall pick of the upcoming NFL Draft. Miami has seen all the tape it needs on the exceptional talent, especially what Smith was able to do last season.

He played his best football against the toughest competition and was a primary factor behind the Crimson Tide’s offense averaging 48.5 points per game; the most of the Nick Saban era.

After snatching two touchdown passes from Tua Tagovailoa as a freshman in 2017 — including a 41-yard, game-winning catch in the 2018 CFP National Championship — Smith would be on the receiving end of 17 scoring tosses from Tagovailoa as a starting quarterback in 2018 and 2019.

The two are familiar with each other and this is what Miami needs.

Smith could instantly be the No. 1 option in South Florida on the outside.

Despite the Dolphins having DeVante Parker, there were too many dropped passes in 2020.

Miami says it is all in on Tagovailoa.

One way to prove its loyalty is drafting the native Hawaiian’s best friend. In wanting to change the culture and get control of the AFC East, the Dolphins need help on offense. Jon Gruden made the same move in 2005 as the head coach of the Tampa Bay Buccaneers. He had Carnell “Cadillac” Williams, former Auburn running back, at the Senior Bowl and really liked him.

Williams did not participate in the event; nevertheless, the Bucs drafted him at No. 5 overall.

RELATED: Alabama QB Bryce Young listed as a Heisman sleeper for next season, according to Fox Sports

A chance has presented itself to the Dolphins to take the best receiving option in the draft.

If Flores and company take Smith, it would show Tagovailoa how much the team is invested in him.