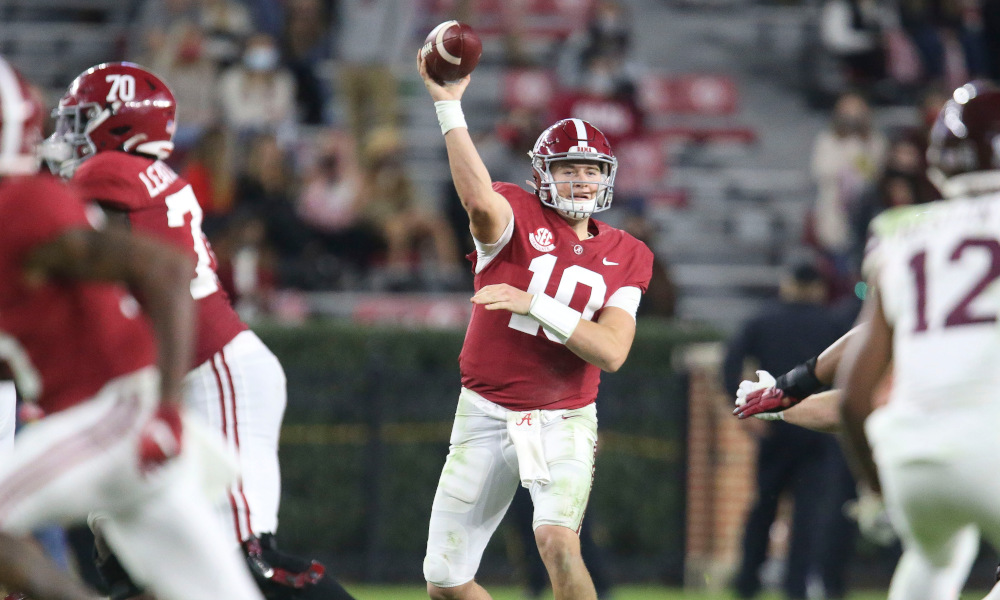 For the first time, the Reese’s Senior Bowl will be the most important event to evaluate collegiate athletes for the NFL Draft.

With the game scheduled for next week in Mobile, Ala., personnel members from all 32 teams, media pundits and players expecting to display their worth will all be at Hancock Whitney Stadium. Instead of the traditional North and South teams, the rosters are named American and National. The coaching staffs of the Miami Dolphins (National) and Carolina Panthers (American) are running the venue.

For the University of Alabama, seven of its alums accepted invitations to the Senior Bowl and most will play in the game. DeVonta Smith, the 2020 Heisman Trophy winner and projected top-five draft pick, will neither practice nor play because of a thumb injury he sustained in the College Football Playoff National Championship Game.

He will be attending as a media rep to meet with the Dolphins. Of the players representing for the Crimson Tide, two will benefit the most.

Mac Jones (quarterback) and Alex Leatherwood (offensive tackle) have an opportunity to cement themselves as first-round locks for the draft.

Both individuals are projected as first-rounders via yours truly of Touchdown Alabama Magazine; however, this is a chance to impress NFL teams up close.

The biggest criticism against Jones is he only benefited from having immense talent around him.

Despite his preparation, work ethic, accuracy, ball placement and ability to dissect defenses, the national audience sees the Heisman finalist and Consensus All-American as someone who was carried by Alabama’s wide receivers. In working with the American Team and Coach Matt Rhule, this is Jones’ time to show he can create chemistry with any one on the field.

If he has a week of practice where he’s connecting with everyone in stride, on target and he’s having success, people will take him seriously as a first-rounder. Also, the Panthers have the No. 8 overall pick in the draft and need a quarterback. A strong outing from Jones may cause Rhule and company to draft him. A lot of doubters surround the names after Trevor Lawrence (Clemson) at the position, but Jones can remove his name from the list next week.

The two-time national champion is ready to ball out.

As for Leatherwood, there is one name at offensive tackle that pundits regard as being better than him: Penei Sewell.

RELATED: A look inside what Alabama football gains in its hire of Bill O’Brien at offensive coordinator

Sewell, an alumnus of the University of Oregon, won multiple awards in 2019 — including the Outland Trophy, Morris Trophy, Unanimous All-American and first-team All-Pac-12.

The 6-foot-6, 331-pounder is a very dominant offensive tackle and though he opted out of the 2020 season, he still projects as the No. 1 tackle in the class.

Trey Smith, a former standout at the University of Tennessee, will be at the Senior Bowl on American with Leatherwood, but he’s working out as an offensive guard.

Leatherwood can show that he is the best tackle in the group with a quality performance.

The 6-foot-6, 312-pounder can go anywhere within the top-15, especially seeing as how he was the Outland Trophy winner, SEC Jacobs Blocking Trophy winner (with Landon Dickerson) and captained an offensive line to the Joe Moore Award last season.

A native of Pensacola, Fla., Leatherwood was one of five Unanimous First-Team All-Americans for Alabama in 2020.