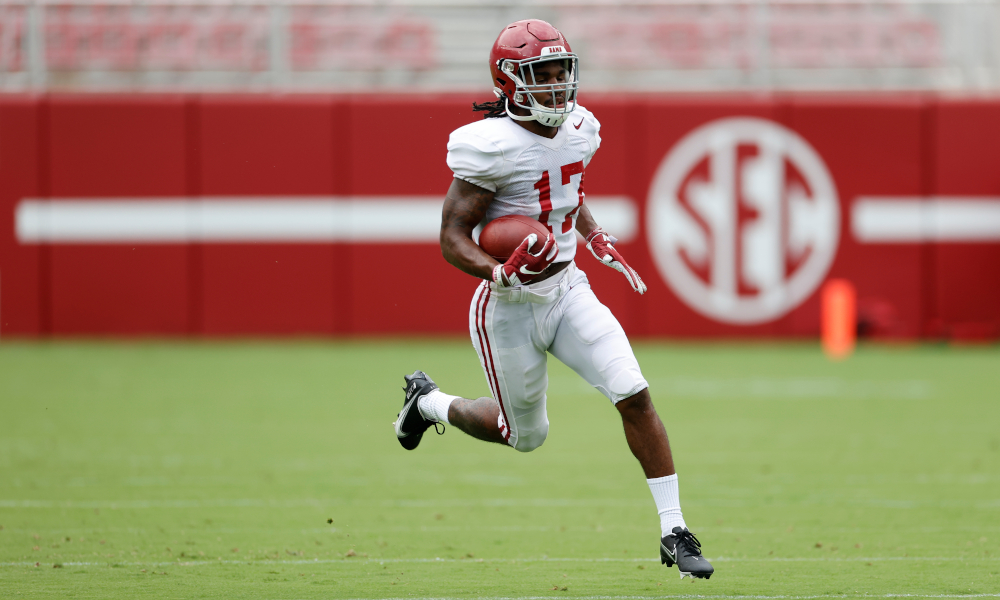 He played next to a Heisman Trophy winner as his teammate at Alabama, but Jaylen Waddle is prepared to show NFL teams that he’s the best wide receiver in this year’s draft class.

If not for an ankle injury versus Tennessee last season, the native Texan might have won the Heisman. He was dominant through the Crimson Tide’s first four games, totaling 25 receptions for 557 yards with four touchdowns. Waddle posted 100-plus yards receiving in each of the Tide’s first four games while averaging over 20 yards per catch. His unfortunate injury caused him to miss seven games; however, Waddle returned for the College Football Playoff National Championship matchup against Ohio State.

He was not fully healthy, but he still caught three passes for 34 yards. It was his toughness that helped Alabama capture a national title and secured the program’s second perfect season under Nick Saban. The 5-foot-10, 182-pounder collected 106 receptions in three years, including 17 for touchdowns. Waddle was also breathtaking as a return specialist, tallying two punt return scores and a kick return touchdown in his career. He is projected to be taken in the first round, and no media pundit has him slotted lower than No. 16 overall. On Wednesday, the former four-star receiver was featured on NFL Total Access.

He told Andrew Siciliano of NFL Network that he will run his 40 at Alabama’s Pro Day.

Here’s the full conversation with Jaylen Waddle on his amazing comeback, his speed after the injury, and his Alabama quarterbacks. #NFLNow @nflnetwork pic.twitter.com/3UvN93y7jr

When it comes to what separates him from DeVonta Smith and Ja’Marr Chase, Waddle said a team can put him anywhere.

“I’m just different,” Waddle said. “You can put me on special teams, backfield, outside, inside, and if there is a play to be made, I can make it. I have versatility. I am much more than just a receiver. I am a playmaker, and I can make plays for any team. I can go well for any offense.”

RELATED: Report: Nick Saban adds another coach to his staff at Alabama as a defensive analyst

Waddle plans on running the 40 on March 23 and executing positional drills at the Tide’s second pro day.

Should he clock a strong time, it will add more to the debate between Waddle, Smith, and Chase.