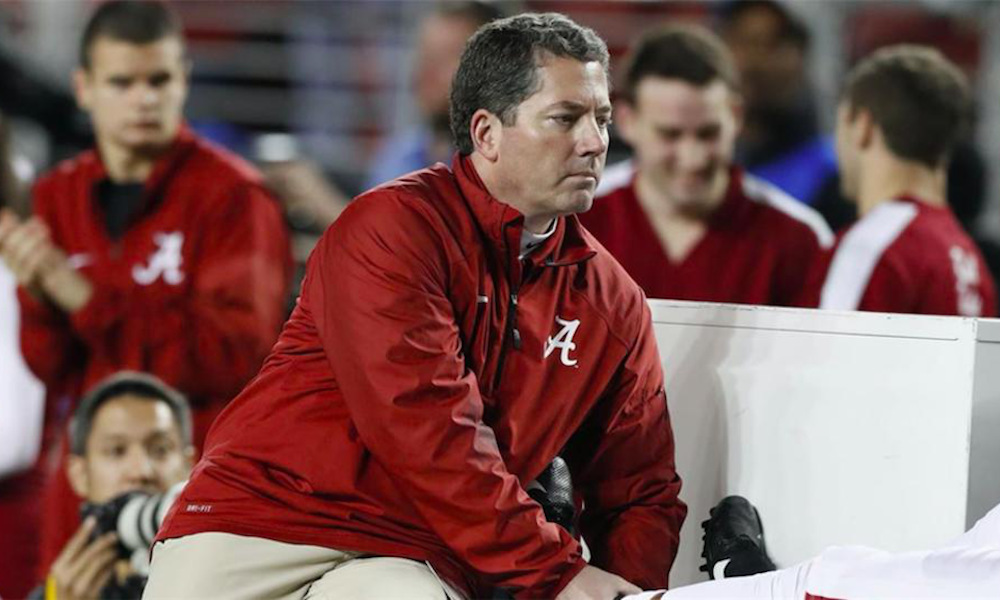 During a year where we needed college football, Nick Saban and the University of Alabama took fans on an incredible journey that ended with a national championship in 2020.

In the midst of a global pandemic, the Crimson Tide looked stronger physically and mentally. When it came to placing credit, the accolades went to the players and on-field coaches. Both aspects deserved it; however, it was the people behind the scenes that made it special. Before last season, Alabama struggled with soft tissue injuries from 2017 to 2019.

Whether it happened in spring practice, summer workouts, or fall camp, multiple players — mainly at critical positions — would succumb to lower-body injuries.

RELATED: Can Xavier Williams emerge as a starter at wide receiver for Alabama this spring?

This concerned Tide fans, especially in 2018 and 2019. Alabama failed to capture a championship in both years, as it dealt with mishaps to Christian Miller, Terrell Lewis, Dylan Moses, Joshua McMillon, LaBryan Ray, Trey Sanders, and others.

Tua Tagovailoa sustained injuries to his hand, ankles, knee, and hip in two seasons as a starting quarterback.

Scott Cochran served Saban through 13 years as the program’s Director of Strength and Conditioning, but he would take his talents to the University of Georgia after 2019. National media felt Cochran’s departure would be the end of Saban’s dominance; however, it has created a chance for him to potentially have two dynasties.

Last year, Alabama hired two coaches from Indiana University who have changed the culture of sports medicine and conditioning student-athletes.

David Ballou and Dr. Matt Rhea have become two of the most popular coaches on staff.

Regardless of not having spring practice, both worked with Jeff Allen (Alabama’s head athletic trainer) and made sure the workload, balance, and energy levels of each player were at peak performance. No one suffered a soft tissue injury during the summer, and the Tide concluded preseason camp at full strength. It dominated a conference-only schedule, and though Landon Dickerson and Jaylen Waddle suffered injuries, both returned to play versus Ohio State in the College Football Playoff title game.

Last week, yours truly of Touchdown Alabama Magazine spoke with Dr. Lyle Cain — an orthopaedic surgeon for Andrews Sports Medicine and Orthopaedic Center in Birmingham, Ala. A native of Birmingham, Cain treats active patients with shoulder, knee, elbow, and joint problems. He earned his bachelor’s degree in chemical engineering from the University of Alabama and master’s from the University of Alabama (UAB) School of Medicine.

Cain serves as the team’s physician and has served Alabama Athletics for 20 years.

He has been a critical part of Saban’s ride to national titles since 2009. When it comes to the difference between 2020 and previous years, Cain directs a lot of credit toward the cooperation of players and coaches during the Coronavirus crisis.

“We were very fortunate last season,” Cain said. “With not having spring activities, we had to endure the COVID pandemic. We (doctors) were getting tested, coaches were being tested, and players had to get tested every day. The players did a great job of taking responsibility and we were able to keep them healthy.”

As for the lack of soft tissue injuries, Cain said Alabama was ‘fortunate’ to hire Ballou and Rhea went it did.

“They are different, and they have an unconventional training method,” Cain said. “Coach Scott Cochran was good for the program during his time, and he helped us have success but Rhea and Ballou had workouts and injury prevention techniques for our players that kept them healthy and explosive. We were able to peak at the right time and win a national championship.”

According to Cain, soft tissue injuries happen when there is an overuse of the knee, ankle, quadriceps, and hamstring muscles.

His first major surgery came in 2010, where he repaired Julio Jones’ broken hand. Since then, Cain became the go-to physician for all players and coaches. Some of his finest work came with Kenyan Drake, Tua Tagovailoa, Jaylen Waddle, and Landon Dickerson. Drake had two major injuries (ankle, arm) in 2014 and 2015, but Cain and Drake’s mentality pushed the native Georgian to one of the most iconic moments in a national championship game. Drake returned a 95-yard kickoff for a touchdown versus Clemson in the 2016 CFP National Championship Game.

It was one of a few plays that won the game for Alabama.

RELATED: Cam Robinson is expected to play on a franchise tag for the Jaguars next season

Tagovailoa’s injuries were unique. The dislocated right hip was a freak mishap, but Cain said Tagovailoa’s resilience impressed him.

“He is just a great young man and a positive person,” Cain said. “The reason why his outcome was positive is Tua sees the glass half full rather than half empty.”

Both Waddle and Dickerson were tough through their injuries. Cain said he knew something was wrong with Waddle’s ankle when he came off the field versus Tennessee. He and the training staff did not even bother going to the medical tent.

“We knew Jaylen’s ankle was fractured, so we immediately took the MRI in the locker room,” Cain said. “There was no confusion with his injury. We knew it when he hopped off the field. He is a really tough guy. His mentality pushed him really hard to make a comeback.”

As for Dickerson, Cain said the two-year starter was the ‘epitome’ of Alabama’s 2020 football team.

RELATED: Ale Kaho backs out of pledge to Utah, commits to UCLA Bruins

“Landon hit rehab and physical therapy hard,” Cain said. “He never pouted. He wanted to find some way to support his team, and he was adamant about playing as fast as he could.”

Waddle and Dickerson played a role in the championship confetti falling on Alabama, but Cain said there is a fine art to recovering from injuries.

“Having a strong mindset is a huge part of recovery, but you also have to be able to slow an athlete down,” he said. “Sometimes, they get into a mental space where they want to take on more. This can be a bad thing because an injury can reoccur for an athlete, and the recovery process takes longer. You have to take them through the process one step at a time.”

The unconventional style of Ballou and Rhea has won over the team.

People are excited about what they will do this spring. Both have enhanced the catapult system, and their workouts are tailored-made for each athlete. Ballou and Rhea coach by the rule of “if it does not work on the field, then we are doing it in our training.”

This method led to success on offense, defense, and special teams for the Tide last year.

Alabama’s medical staff was behind Saban’s second perfect season, and its strength staff is set to create more success for years to come.