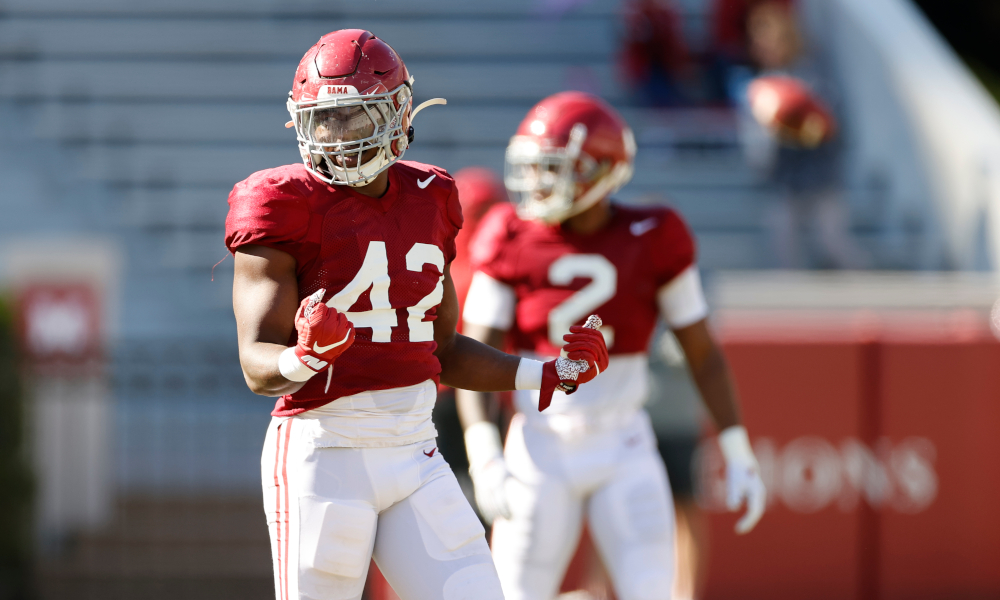 He may have arrived at the University of Alabama as a three-star recruit, but Jaylen Moody is another shining example of what happens when you trust Nick Saban’s process.

After being a core special teams player in 2018 and 2019, the South Carolina native got an opportunity to play at linebacker in a matchup with Arkansas last season. He replaced an injured Christian Harris and the coaching staff recognized his potential to become a starter on defense. His impressive performance in a 52-3 victory over the Razorbacks included seven tackles (shared the team lead), one forced fumble, and one fumble recovery. Moody earned Defensive Player of the Week for his efforts in relief.

RELATED: Chris Owens explained why Alabama’s decision to hire NFL coaches motivated him to return for a sixth year

He finished the 2020 campaign with 18 tackles and is starting next to Christian Harris this spring.

Coach Saban stated in a recent presser that Moody has the ability to play middle and weakside linebacker. The 6-foot-2, 225-pounder has put in the time to learn the system and is ready to showcase his value. Since the arrival of Tua Tagovailoa in 2017, the production for Alabama was on offense. This season, the leadership and playmakers are on the defensive side of the ball.

On Monday, Moody spoke to local reporters via Zoom. He was pleased with the chance to prove himself against Arkansas; however, he is more excited about this defense. According to the senior, he and Harris have incredible chemistry.

“Christian and I are really close,” Moody said. “That is my little brother. We hang out a lot off the field as much as we do on the field. We talk about plays all the time, and what things could we have done better. I think that chemistry between two guys playing side by side is very important.”

Moody and Harris want to play off each other.

This is the kind of chemistry that made Rolando McClain and Cory Reamer (2009), Dont’a Hightower and Nico Johnson (2011), C.J. Mosley and Johnson (2012), Reggie Ragland and Reuben Foster (2015), and Rashaan Evans and Shaun Dion Hamilton (2017) national champions.

Harris is putting the responsibility of calling the defensive sets on himself, but Moody said all the veterans in the inside linebacker room are capable of running the defense.

After not playing much in 2020, Moody said Shane Lee is looking more ‘explosive’ in practice.

“Shane Lee has been doing really well,” Moody said. “I love to see where he’s at. He’s very fast and he’s getting better every day. The sky is the limit for him. He is a great player and very smart too.”

Lee, a junior, totaled 86 tackles in 2019 and made Freshman All-SEC and Freshman All-America teams. Hopefully, he will be able to resurface in the fall and have success.

Moody is the lone senior in the inside linebacker room, and he is embracing a leadership role.

One thing he has noticed is other players are stepping confidently into their roles too. Players are communicating in practice and bouncing ideas off each other.

This defense has the capability to be as good as some of the earlier groups under Saban.

Before the spring game, Moody, Harris, and the Alabama defense will look to own the second scrimmage on Saturday.