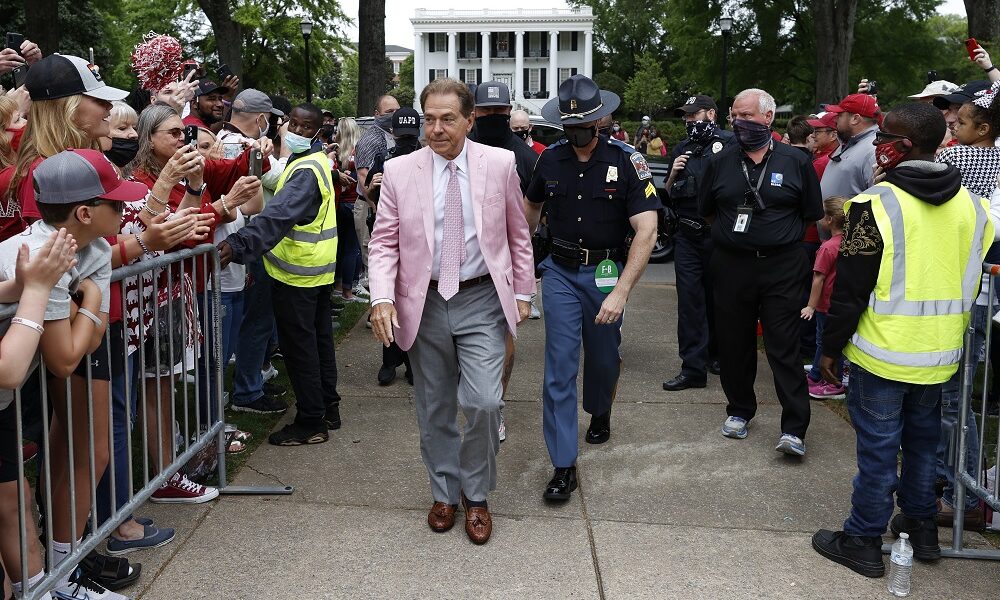 When he is not coaching Alabama players on the football field, Nick Saban is an avid golfer.

As he was teeing it up this week, the statement from Jimbo Fisher made it to him in a conversation. Coach Saban’s good friend told Texas A&M fans at an event for the Houston Touchdown Club that the Aggies ‘will beat Saban’s ass’ before he retires from Alabama.

Simone Eli, a TV Sports Anchor for WKRG (Channel 5) in Mobile, Ala., wanted to get Saban’s thoughts on Fisher’s comment.

RELATED: Brandon Turnage enters his name into the transfer portal: How does this affect Alabama’s secondary?

Saban’s response was in hilarious form.

“In golf?” *laughs* “Is that what he was talking about? In football? 🤣

Nick Saban’s response when I asked him about Jimbo Fisher’s “beat his a$$” comment. #RollTide pic.twitter.com/Zm9iMLQTAZ

“In golf?” Saban laughed in answering the question.

Of course, he knew Fisher was talking about on the gridiron.

“I’m sure there will come a day,” Saban said on Fisher possibly beating him. “Is that what he was talking about? In football? He used to be on my noon-time basketball league. We are no longer partners when it comes to that. They [Texas A&M] have a really good team. They have a really good program, and they are getting better all the time. There are a lot of challenges in the SEC, and they are certainly one of the up-and-coming programs. He has always been a great coach. He did a great job for us when he was with us, and he’s had a great career as a head coach. It is going to be a challenge  for us when we have to play them.”

Texas A&M brought in the No. 8 recruiting class for this year. The Aggies are winless since 2012 against Alabama, including four losses at Kyle Field. Fisher is confident he will put an end to it in the fall. The Tide and Aggies will battle on Oct. 9 at Kyle Field.