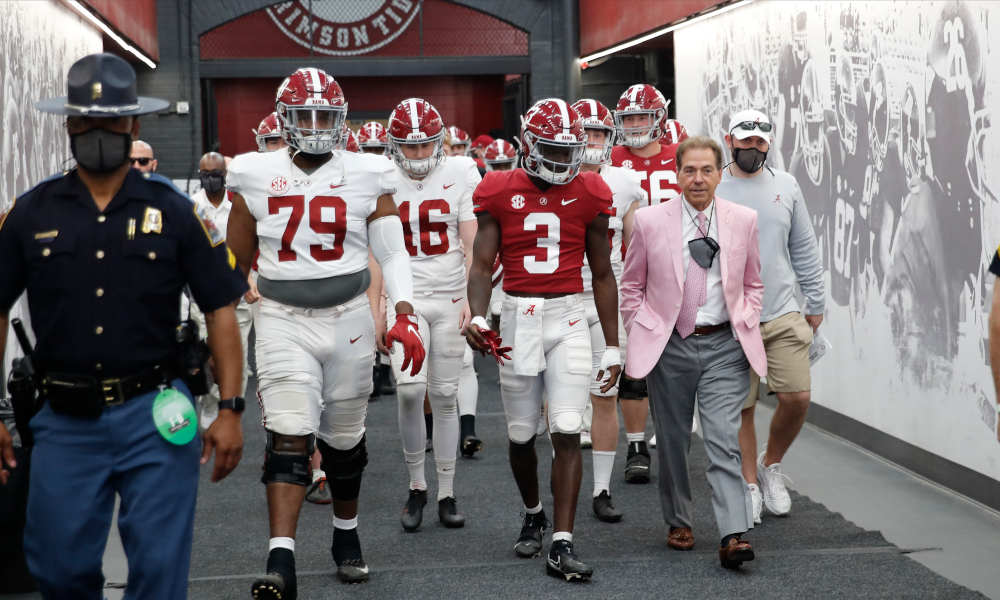 Nick Saban could not hide his excitement when it came to discussing certain players during spring practice.

After securing his second undefeated national title at Alabama, he graduated marquee playmakers to the National Football League.

Some are concerned about how the Crimson Tide will look offensively; however, others are prepared to see a fearsome defense take the field in the fall. When he was not talking about COVID-19 vaccinations, name-image-and-likeness, or the explosion of graduate transfers, Saban spoke on the potential chemistry of this year’s Alabama team. He had a first-year starting quarterback in Mac Jones win a national championship, but now the mantle falls on sophomore Bryce Young for a repeat.

Nick Saban on Alabama’s team chemistry for this season:

“Well it’s always a working progress, but I think the players are excited about the opportunity and challenges this season will bring.”

The Crimson Tide returns leadership on defense, and much youth on offense. pic.twitter.com/C8rtL7G4wE

“Well, it’s always a working progress but I do think the summer program is where the leadership on the team has the best chance to flourish,” Saban said at the Old Overton Golf course. “The coaches are not always around, so the players have more input. We’ve had our annual leadership on the lake, and I think the players are excited about the opportunities and challenges this season will bring.”

Offensively, names such as Brian Robinson, Evan Neal, Chris Owens, John Metchie, Slade Bolden, and Jahleel Billingsley have to dictate the temperature in the room. Alabama carried a young offense in 2011 and 2015; nevertheless, both groups won a national championship.

It will be intriguing to see how this team stacks up, but it knows the mentality it must have to win consistently.

RELATED: Nick Saban on how Alabama’s handled COVID-19: “We are back to normal.”

The Tide is going after its second repeat since the 2011 and 2012 seasons.